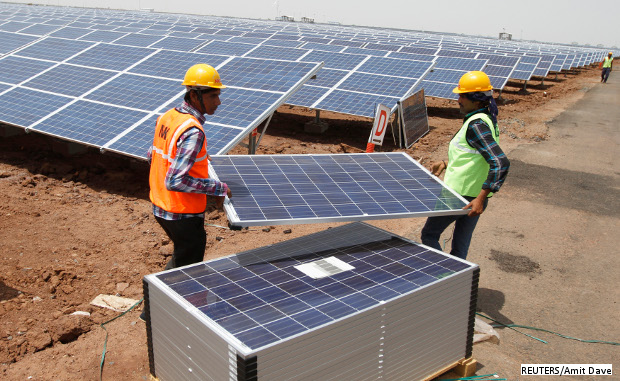 As India--the world's third-largest emitter of greenhouse gases but 127th in terms of per capita emissions--ponders an energy-future balancing growth, jobs and environment, there is encouraging news from a new report.

The renewable energy sector, a particular focus of attention for Prime Minister Narendra Modi, has generated 400,000 jobs till 2014, according to a report released by the International Renewable Energy Agency (IRENA).

The sector could generate a million jobs by 2022, if the government reaches its goal of 100 giga watts (GW) of solar photovoltaic (PV) energy and 60 GW of wind energy.

India is ranked fourth globally with 5.7% of all the people employed in the renewable-energy sector worldwide. China is the largest global renewable-energy employer, with 44% of the world’s jobs, or 3.4 million, followed by Brazil with more than 0.9 million jobs, USA (0.7 million), India (0.4 million) and Germany (0.3 million).

India has a renewable-energy potential of about 895 GW, of which solar alone could generate 750 GW, as IndiaSpend previously reported.

Globally, more than 7.7 million people are employed (directly or indirectly) in the renewable-energy sector (excluding large hydropower). This is an 18% increase from last year’s 6.5 million, according to the IRENA report.

Five of the top 10 countries providing jobs in this sector are from Asia (China, India, Indonesia, Japan, and Bangladesh).

The solar PV sector employs 125,000 people (grid-connected and off-grid applications) in India. It is also the largest renewable energy employer in the world, accounting for nearly 2.5 million jobs.

More jobs blowing in the wind

If the government’s goal of installing 60 GW wind energy is reached, India could create up to 183,500 additional jobs in that sector (excluding manufacturing) by 2022, according to the IRENA report.

While most of these jobs (81%) would be temporary, for eg. construction, about 16% would be skilled.

Direct employment in India increased by 28% to 53,000 in 2014, with 29,000 jobs in installation, operation and maintenance, and the remainder in manufacturing, the report estimates.

China leads global employment in solar PV, wind, solar heating and cooling, small and large hydropower, biomass and biogas. Brazil with over 0.8 million jobs is the leading employer in biofuels. 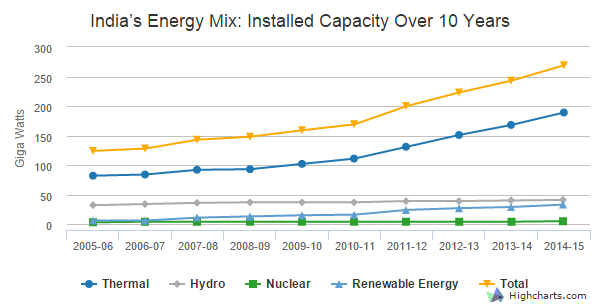 Over the last 10 years, from 2005-06 to 2014-15, the renewable-energy installed capacity rose five times to reach 12% of India’s total installed power capacity.

India’s solar PV manufacturers struggle to compete with suppliers from China, United States, Japan and Germany, according to the IRENA report. Only 28% of India’s module production capacity and 20% of its cell manufacturing capacity were utilised in 2014.