While Militancy Made Headlines, Drug Addiction Quietly Spiked In Kashmir

Drug seizures have increased and the number of cases being registered under the Narcotic Drugs and Psychotropic Substances (NDPS) Act, 1985, for peddling and smuggling of banned substances are rising, said Vaid.

Over the last “five to six years”, 968 quintals, or 96.8 tonnes, equivalent to 12 truckloads (at 8 tonnes per truck), of narcotic drugs have been seized, the state’s home department revealed--in an order issued on September 25, 2017--asking police officers to follow standard operating procedure while dealing with cases registered under the NDPS Act.

Despite the seizure, “the problem has not received due attention of investigators and the prosecutors,” the order said. “As a result the number of acquittals in such cases greatly outnumbered the convictions, as for every conviction there are about nine acquittals.”

Between 2014 and August 2017, 118 kg of heroin was seized, according to Vaid. In the same period, as many as 18,435 drug addicts reported for treatment at the two hospitals associated with the Government Medical College (GMC) in Srinagar and a Drug De-addiction Centre (DDC) run by the Jammu & Kashmir police in the city, official data at the two hospitals and DDC revealed.

The numbers may not seem alarming for a region with a population of 7 million but only a small percentage of those who are addicted land up for treatment, Muzaffar Khan, director of the DDC, pointed out.

“In the early 1980s, when doctors at a Srinagar Hospital found that a patient was a heroin addict, it was such an unusual experience that the matter was brought to the notice of the then chief minister,” said Arshad Hussain, a leading psychiatrist in Kashmir who treats mental health patients at the two GMC hospitals in Srinagar.

The subcontinent was dealing with an opioids boom in the 1980s, but Kashmir stayed trouble-free, Hussain pointed out. Now, he and his colleagues are witnessing a very different situation, he added.

Vaid’s statement did not elicit any response from political parties, civil society groups or citizens. This could imply widespread knowledge of the problem. It could be also because of the general cynicism with which citizens here greet statements made by security agencies, often accused of twisting Kashmir’s political narrative.

But the state’s judiciary and civil administration have expressed concern over the growing drug menace. On August 20, 2017, the Jammu & Kashmir high court directed the state government to “revisit the issue relating to control of drugs as per the experience gathered from other states and various international forums dealing with the control of drug addiction”.

In September 2017, chief minister Mehbooba Mufti directed senior police officials to use the most draconian laws, including the Public Safety Act (PSA)--a law under which a person can be detained without trial for upto two years--against those involved in the cultivation and smuggling of drugs.

The most important reason for growing drug addiction is the easy availability of drugs, said Hussain.

“There are some rural areas where buses do not go but opioids do. And cannabis is available more easily than cigarettes,” he said. “We need purposeful policing if we have to stop the circulation of drugs.”

Many farmers in southern Kashmir have been growing poppy to supplement their incomes since at least the late 1980s, finding a ready market in nearby states such as Punjab, Haryana and Rajasthan. Law enforcement agencies have been taking action, even destroying crops, but they haven’t been able to prevent the spread of poppy cultivation in the state.

Ahmad and his seniors at the excise department have built an extensive network of informers, many of them volunteers. Since 2008, the team has destroyed poppy crops over 2,080 acres and cannabis crops over 5,365 acres, mostly in south Kashmir.

But farmers manage to conceal poppy or cannabis among other crops and in tree plantations.

In 2016, 180 kg of charas (a product from the resin of cannabis plant), 546 kg of fuki (a powdery substance made from poppy seed) and 4,161 kg of poppy straw (the husk left after opium is extracted from poppy pods) was seized, police claim. This is in addition to seizures of synthetic drugs such as heroin and brown sugar. In 2016, more than 550 cases involving synthetic drugs were registered. 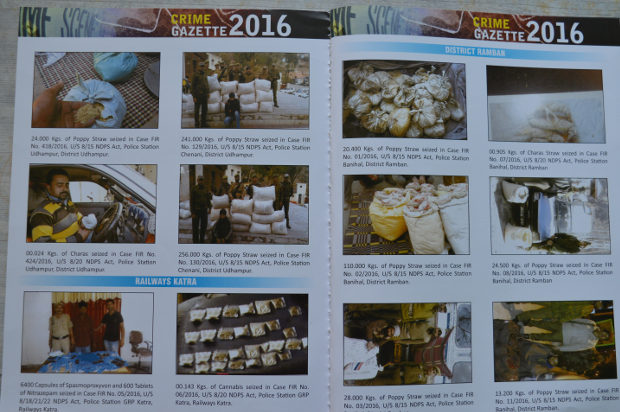 Photographs taken during drug seizures in Jammu & Kashmir are seen in the Police Gazette of Crimes, 2016, a report released by the state's home department.

What’s more, there is now a thriving reverse trade in drugs--heroin and brown sugar, prepared in laboratories elsewhere, are making their way into Kashmir.

Between 1980 and 1988, there were just 189 reported cases of drug addiction in Kashmir, according to a 1993 paper by leading psychiatrists Mushtaq Margoob and KS Dutta. But even then, the researchers had warned that “urgent steps must be taken to curb” the problem “before it is too late”.

Hussain is also troubled by the number of children who are seeking treatment for solvent addiction. There were more than 200 children addicted to solvents, mostly under 18 years of age, who had come to the two GMC centres over the last two years. Some of them had also switched over to drugs, he added.

“The most active component in solvents is toluene which is highly intoxicative,” Hussain said. Toluene is routinely used in stationary material such as correction fluids. “Students who use solvent-containing products should be monitored by teachers.”

Relentless conflict, stress and collapsing governance can often lead to rising levels of drug addiction in a population, as IndiaSpend had reported in this November 12, 2016, article on Manipuri women. Even in an otherwise prosperous and orderly state such as Sikkim, high unemployment levels could cause rampant drug addiction, as IndiaSpend reported on March 18, 2017.

All these problems, from conflict to unemployment, are prevalent in Jammu & Kashmir. Political and armed conflict has had an adverse impact on the state’s economic growth and infrastructure development, according to the 2016 Economic Survey of Jammu & Kashmir.

“[The conflict] has affected the important sources of livelihood of local people such as tourism, horticulture, handicrafts and industries,” the survey said. The losses caused by the 2016 unrest in Kashmir between July 8 and November 30 itself are estimated to be more than Rs 16,000 crore.

On average, an adult living in the Kashmir Valley has witnessed or experienced 7.7 traumatic events during his/her lifetime, a 2015 survey by Medicines Sans Frontiers had revealed.

The survey showed that nearly 1.8 million adults (45% of the adult population) in Kashmir are experiencing symptoms of mental distress, with 41% exhibiting signs of probable depression, 26% probable anxiety and 19% probable post-traumatic stress disorder (PTSD).

“Because of the perpetual political conflict (in Kashmir), which has often led to violence, issues such as drug addiction have crept in,” said Rao Farman Ali, a researcher and spokesperson of the South Kashmir Civil society (SKCS). “And, because of the conflict, our social and administrative structures are not effective in addressing such problems.”

‘I want to get over drug use, I want to study’

Three years ago, Waleem (name changed to protect identity), a university law student in Jammu & Kashmir, took to drugs to deal with a broken relationship. Today, Waleem, who once aspired to become a top lawyer, has not completed his degree, and his family is in distress. His expensive drug habit, which includes heroin and brown sugar, have eaten into his mother’s savings.

Waleem is being treated by psychologists, and his mother said that she is hoping that her son will soon recover. 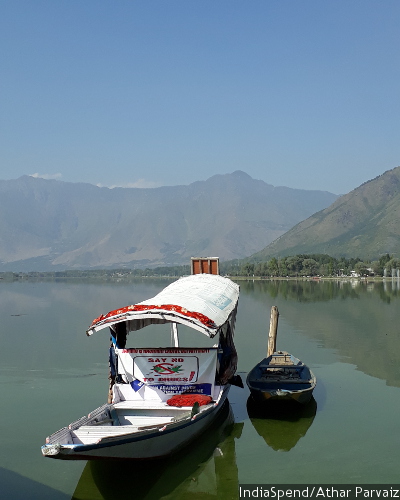 An anti-drug awareness poster on a shikara at Dal Lake, Srinagar.

At the DDC in Srinagar, we met Rustum (name changed to protect identity), a 15-year-old lean boy with sunken and bloodshot eyes. He started using drugs when he was in grade V, he said.

Rustum’s descent began when a classmate took him home when the family was out. “He took out some charas and put it into a cigarette,” Rustum said. “He smoked half and passed the rest to me. I was already a smoker, so I took it with great curiosity.”

“Since then, I have taken charas regularly and sometimes alcohol and heroin as well,” Rustum said, but added that he is now keen to recover. “I know it has given a lot of pain to my parents.,” he said. “Now I want to give up drugs and study.”

Rustum’s father, a class-four government employee, said that his wife is depressed by her son’s addiction. “She often doesn’t sleep at night and has almost stopped talking to others,” he said. She has started showing signs of recovery after the boy was admitted at DDC, he added.

But the drug habit is hard to shake off, said doctors. Two years ago, Khan and his colleagues at the DDC successfully treated a youth in his late 20s for 35 days. “But, to my utter shock, a few months later I saw him begging for money,” said Khan. “He had relapsed.”

A police officer, who spoke with IndiaSpend on the condition of anonymity, acknowledged police failure to address the drug problem and attributed it to the force’s preoccupation with law and order.

“Why the police are not able to restrict the circulation of drugs has a lot to do with their constant involvement in the law and order problems that Kashmir has no dearth of,” he said.

Umar Trumboo, general secretary of Civil Society Forum of Kashmir (CSFK), an NGO, agreed. “It is a fact that the political and security situation keeps changing here frequently,” said Trumboo. “The police often get busy dealing with law and order issues and that allows drug use and peddling to remain unnoticed.”

“[But] despite the fact that major offences under the aforesaid Act are non-bailable, it has been observed that in several cases the drug offenders secure acquittal on technical grounds,” read the home department’s order we previously cited. “A large number of offenders in NDPS cases are acquitted due to non-compliance of mandatory provisions and the prescribed procedure.”

What can be done: More officers, fewer acquittals

A police official who did not wish to be named told IndiaSpend that the police force needed an exclusive anti-drug cell active in every district. “Any progress in curbing this menace will be possible only when some police officials are specifically asked to deal with drug addiction and peddling,” he said.

Speedy acquittals of drug peddlers is another issue. “In other north Indian states, a person arrested under NDPS Act doesn’t get bail for months,” said the officer. “But here in Kashmir, such arrestees secure release within 10 days.”

CSFK intends to bring groups working against drug addiction under one umbrella and submit a proposal to the government to bring all relevant departments such as health, education, sports and excise departments under one directorate to deal with drug use, Trumboo said.