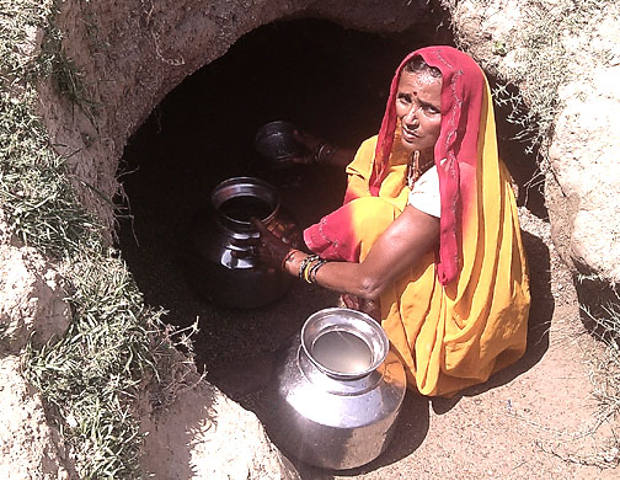 Mahoba, Uttar Pradesh: Here in Mahoba, one of India's 250 poorest districts in one of its poorest states, the neighbourhood of Mathuranpura is considered particularly poor: It is home to 1,000 dalits, the lowest of Hindu castes, assigned, literally, to the peripheries, where few things are as exclusionary as access to water.

None of the 1,000 dalits who live in mostly mud-and-thatch homes have regular jobs (the majority are construction workers), there is no school in the neighbourhood, and none of their homes has piped water.

On June 23, three months after bountiful but unseasonal rains destroyed crops and imperilled farming--as we reported earlier--Mathuranpura's dalits went to the district magistrate, Vireshwar Singh, with a petition: Give us a water pipeline.

A year ago, a water pipeline was laid, a group of Mathuranpura residents told Khabar Lahariya. It stopped at the house of the panchayat (council) chairman, who, they alleged, did not allow the pipeline to be extended to their mohalla, or neighbourhood.

So dire is the crisis in this water-starved district that locals sometimes dig tunnels some distance from their villages to collect water seeping from the ground, their main source of water, Khabar Lahariya previously reported. It is a reflection of a quietly, worsening groundwater situation, not just in Mahoba--240 km southeast of the Uttar Pradesh capital Lucknow--but across northern India. The situation has been given little attention by the government or media. As a column in The Guardian, a British newspaper, pointed out, when water is overused or unavailable, it only takes only poor management to plunge a region into crisis. 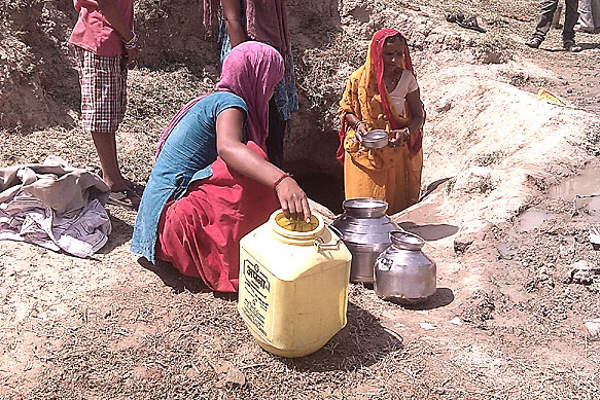 Despite plentiful winter rains, locals are back to their main source of water, underground storage tunnels, in Khanna kasba, 40 km from Mahoba town in UP's Bundelkhand region. Image: Khabar Lahariya.

Mahoba's crisis came rapidly, when its once plentiful water sources were polluted or otherwise devastated (as we shall see later). Mathuranpura's water source is a handpump, which yields little water. The locals said their "arms were exhausted" working it, and they were tired queuing up day and night. The water reduces, and the waits get longer. So, they want that pipeline.

District magistrate Singh said he has taken the petition with "some seriousness" and in the presence of Khabar Lahariya reporters, ordered the water department to lay a pipeline to Mathuranpura.

Across northern India, a critical situation

Mathuranpura and Mahoba's situation is not unusual in India, where 22.2% of rural households get their drinking water from a source that is at least half a kilometre away from home. More than 116 million Indian households in villages cannot access water from a tap. Only 7% households have drinking water sources within their compound in the villages of Mahoba district.

It will be ever more difficult to supply those households with water because more than half of India now faces what is called "high" to "extremely high" water stress, as this graphic indicates. Across parts of northern India, skyrocketing demands on water for agriculture and growing populations have pushed groundwater to levels more critical than anywhere else on earth.

"If measures are not taken to ensure sustainable groundwater usage, consequences for the 114 million residents of the region may include a collapse of agricultural output and severe shortages of potable water," said Matthew Rodell, a hydrologist with the US space agency, NASA, in 2009. He made this declaration after data from twin satellites showed acquifers underlying northwestern India (Haryana, Punjab, Rajasthan and Delhi) being depleted at a rate many times over its replenishment rate--a foot a year, or 126 cubic kilometres of water gone in six years to 2008. That groundwater was disappearing was widely known, but Rodell's data indicated it was depleting at a rate 20% faster than the Indian government had estimated.

The situation is as grim on the Gangetic plains, and a variety of studies reveal a common trend.

"Most of the groundwater-depleted regions coincide with the highly-fertile alluvial aquifers of Ganges-Brahmaputra basin [Mahoba sits on a south-eastern corner], which is subjected to intense groundwater withdrawals associated with crop irrigation," reported this 2014 study presented at a meeting of the American Geophysical Union by a group of Indian and US scientists.

"Groundwater levels do not respond to changes in weather as rapidly as lakes, streams and rivers," said this NASA statement. "So when groundwater is pumped for irrigation or other uses, a recharge to the original levels can take months or years."

This drop in groundwater is starkly evident in Mahoba, unaffected by plentiful, recent rains. 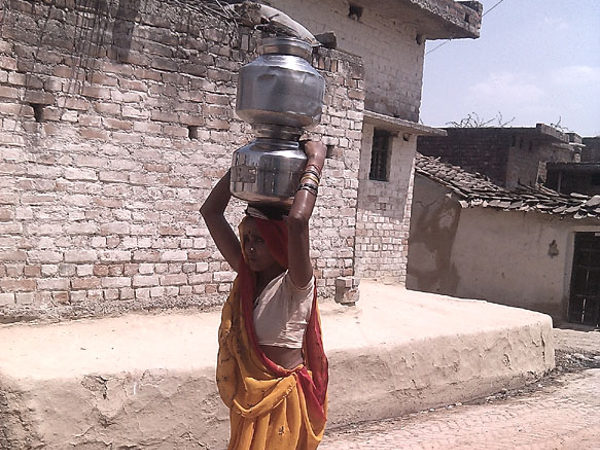 (Above and below) Women are tasked with finding water in Khanna kasba, 40 km from Mahoba town in UP's Bundelkhand region. They walk at least half a kilometre to fetch water from underground tunnels. Image: Khabar Lahariya. 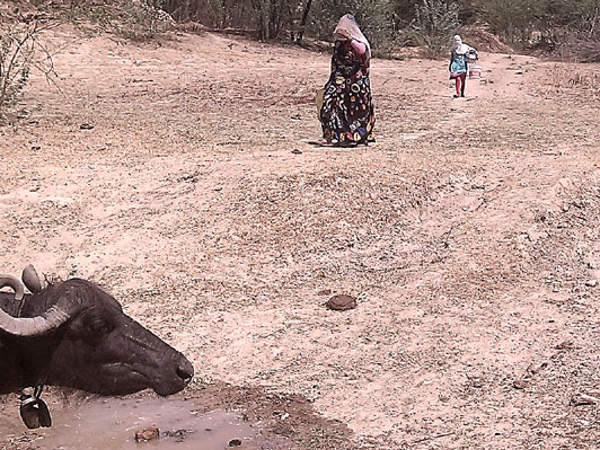 After the deluge, a great scarcity in Mahoba

After the winter deluge, a great water scarcity has fallen across Mahoba, indicating the vagaries of life without an assured supply of water.

Despite being known as the land of talaabs, or ponds, the access to drinking water supply is limited. Most of these large and beautiful water bodies are now dirty and badly maintained. There has been no work or special schemes that may make the water potable. In Charkhari block, which has seven large taalaabs, several homes are now served by domestic drainage, but the drains empty into a pond.

The major river in Mahoba, Chandrawal, first showed signs of drying up a decade ago, but a drought in 2008 was the final blow. Efforts are being made to revive the river only now

Even as groundwater levels drop, Mahoba--and northern India--has no option but to continue with the effort to supply drinking water, whether piped in from rivers or from groundwater sources, such as borewells and lakes.

Rs 11,000 crore is the budget during the current fiscal year for the centrally-sponsored National Rural Drinking Water Programme--now a part of the Swachh Bharat (clean India) mission--launched in 2007 to provide safe drinking water to 116 million deprived households in India's villages. Delhi provides financial assistance to states and union territories for drinking water projects and water-quality testing.

But no funds have been released this year to Mahoba, so far.

With funding from Delhi declining because of financial devolution--the process of handing over money to the states to do their own spending--it is uncertain what lies ahead for Mahoba.

As many as 95 habitations in Mahoba district got drinking water in 2012-13 under the programme. With 90% of the money spent, no targets were set since. Mahoba's people will have to dig more tunnels, and in Mathuranpura, they can only hope that district magistrate Singh, somehow, gets them that pipeline.

(This story has been produced in partnership with Khabar Lahariya, a rural, weekly newspaper run by a collective of female journalists from five districts in Uttar Pradesh and one in Bihar. Each district has its own edition, brought out in the local language of the district. Tewari is a policy analyst with IndiaSpend)