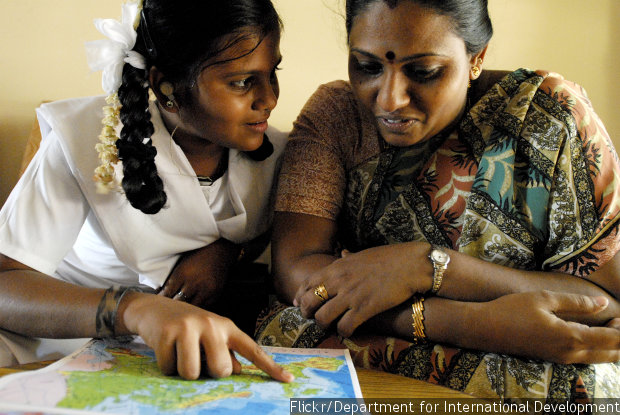 Literacy programmes for mothers can not only improve their own learning skills but also impact their children’s education, a recent study has found.

During the one-year study, conducted in 480 villages of Rajasthan and Bihar--states with the lowest female literacy levels in India--mothers with children between ages five and eight were exposed to three kinds of interventions: Home learning, participation programmes in their children’s education, and a combination of both.

The results showed an increase of 11 percentage points in mothers who could recognise one-digit numbers for one of the interventions, and mothers were more likely to be involved in their children’s education. As for the children, their math scores improved marginally as well.

The study was led by Pratham, an education NGO, Cornell University and the Abdul Latif Jameel Poverty Action Lab (J-PAL) at the Massachusetts Institute of Technology.

Source: The Impact of Maternal Literacy and Participation Programs: Evidence from a Randomized Evaluation in IndiaNote: 'No Impact' refers to no statistically significant impact.

About 30% of Indian adults above the age of 15 years were illiterate, according to Census 2011, the latest available data on nationwide literacy. Illiteracy is higher for females (40.7%), and for those from the scheduled castes (39.6%) and scheduled tribes (48%).

“Even if kids went to school 100% of the time, we are looking at only a couple of hours (of education a day). Several awake hours of children are spent at home, especially of younger children, often with their mother,” said Marc Shotland, co-author of the study and associate director at J-PAL.

Children from richer households--and with better-educated parents--have a learning advantage even if what they learn at school is not factored in. It is, therefore, necessary to look to the household to reduce inequities in children’s education, Shotland explained.

The study found that 58% of mothers exposed to both kinds of interventions could recognise one-digit numbers. In the control group, where mothers had no such exposure, 47% showed similar math skills.

As for children, 60% of those whose mothers had the benefit of both interventions were able to recognise one-digit numbers, as compared to the control group (56%), the study found.

For improvements in child test scores, the authors cautioned that some of the impact of the programme could also be because some children attended classes along with their mothers and participated in the home activities.

Source: The Impact of Maternal Literacy and Participation Programs: Evidence from a Randomized Evaluation in IndiaNote: 'No Impact' refers to no statistically significant impact.

How the literacy capsules worked

In the study, villages were randomly assigned to one of four groups between September 2011 and February 2012--one was a control group of mothers that received no intervention, the second group was exposed to a maternal literacy programme with daily language and math classes, the third group received home learning to become involved in their child’s education, and the fourth group had the benefit of both.

The maternal literacy classes were taught by local volunteers trained by Pratham. For the home learning and participation programme, trainers were paid Pratham staff.

The average mother attended 25 and 27 classes in the maternal literacy programme and combined intervention, respectively, with an average attendance between three and five days a month out of the 12.5 classes held.

Households were successfully visited about 16 times, on average, for the home learning and participation programmes, and mothers were present during 81% of these visits, as measured during the second half of the intervention.

An intervention targeting mothers might not be as cost effective to improve child learning outcomes in the short term as one directly aimed at the child, the authors wrote. The programme cost Rs 500 per mother. What these programmes do achieve is simultaneous targeting of maternal and child learning levels, they added.

The potential larger and long-term effects of the intervention could not be measured as the study did not have enough funds to continue, Shotland said.

For instance, maternal education could lead to fundamental cultural changes in the household which could have long-term effects on the child enrolment in school and/or learning. Some of these changes could be seen in the changing role of mothers in their children’s education.

Researchers found that the interventions did not have a significant impact on the time mothers spent directly helping children with lessons at home. But they had statistically significant impacts in other respects--on the mother examining notebooks, talking to their children about school, and talking to others about their children's studies. Home participation and combined intervention showed more mothers helping children with their homework.

In 1998, the government of India launched the National Literacy Mission (NLM), with the aim of making 75% of India’s population literate by 2007, but fell short of its aims. Still, as many as 127.45 million more Indians became literate by 2009. Of them, 60% were females, 23% belonged to scheduled castes and 12% to scheduled tribes, according to government data.

In 2009, India launched Saakshar Bharat (literate India) to” further promote and strengthen adult education, specially of women, by extending educational options to those adults who having lost the opportunity of access to formal education and crossed the standard age for receiving such education”. The aim was to provide functional literacy to 70 million adults in the age group of 15 years and beyond, primarily focusing on women, and rural areas.

Initially scheduled to end by 2012, the scheme was extended until 2017, covering 410 districts. The goal of the program was to raise the literacy to 80% and reduce the gender gap in literacy to less than 10%, according to a government document.

Between August 2014 and March 2016, the government certified 22.7 million adults as literate, out of the 30.5 million registered for the programme, according to a year-end review from the ministry of human resource development in December 2016. There are no recent estimates of nationwide literacy, or independent evaluations, which could be used to verify this claim.