Many Indian Children, Mothers Healthier Than Ever: Latest Data 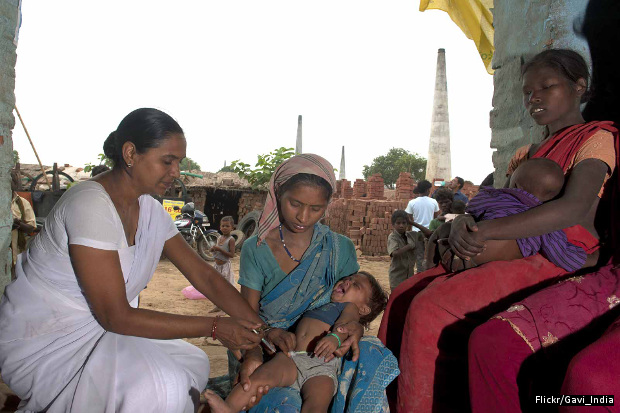 Madhya Pradesh (MP) reported the highest infant-mortality rate (IMR) as well as under-five mortality rate (u5MR) with 51 and 65, respectively, according to data published by the health ministry, as per the National Family Health Survey 4 (NFHS 4), a nationwide health census, the last data for which was released in 2005-06.

Over this decade, rising female literacy, later marriages, the ability to take financial decisions, better healthcare, cooking facilities and water supply are among the reasons why Indian mothers and children are living longer, according to data from the 13 states and two union territories.

But some afflictions have seen limited progress, such as anaemia, reported in half the children in 10 states and more than half the women in 11 states. Overall, progress is uneven across India, the data show.

The Andaman and Nicobar Islands have an infant-mortality rate of 10, better than Brazil (15), the same as China and Bulgaria, according to World Health Organisation data, and better than a host of countries with higher per capita incomes. In contrast, MP's infant mortality rate is worse than some of the world's poorest countries, such as the Gambia and Ethiopia.

Data for union territories and the newly minted one-and-a-half-year-old state of Telangana have been featured for the first time in the NFHS.

The highest fall in under-five mortality was seen in West Bengal--from 59 to 32 over the same period.

The direct reasons for improvement are better maternal- and child-health practices, such as more breastfeeding, births in healthcare institutions (instead of at home), improved vaccination, and the use of diarrhoea medication. The indirect reasons include rising female literacy, later marriages, better cooking facilities, such as gas--thus reducing health risks from wood- or coal-fired stove--and financial inclusion. 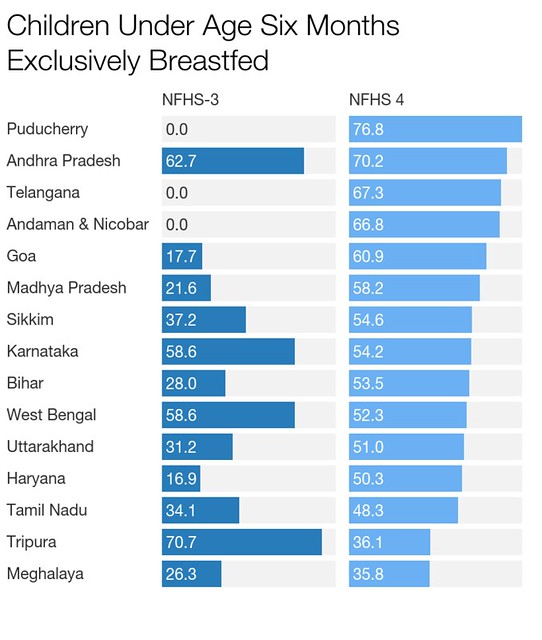 The states that have seen improvements in IMR and U5MR clearly improved their child-health indicators.

West Bengal, which has seen the second-highest reduction in IMR and the highest decline in U5MR, has been able to achieve these through increased availability of oral rehydration solution (ORS) for children suffering from diarrhoea (42.6% to 64.7%) and improving immunisation from 64.3% to 84.4% of children. 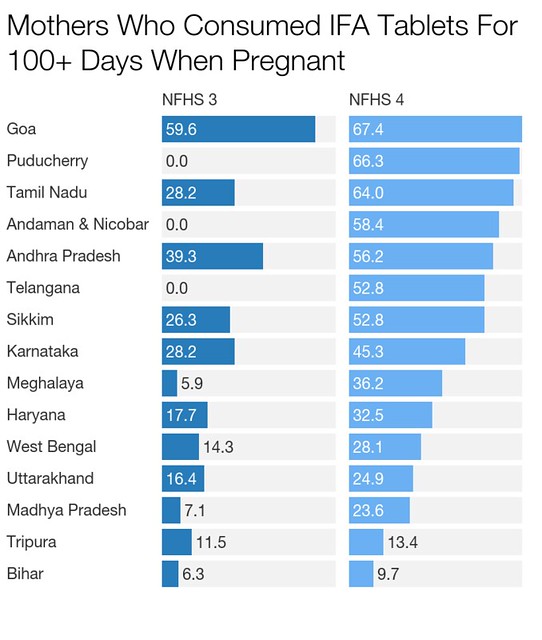 Karnataka saw a decline in IMR from 43 in 2005-06 to 28 in 2015-16 and decline in U5MR from 54 to 32. The state saw an increase in consumption of iron tablets by mothers from 28.2% to 45.3%. The state also saw an increase in the percentage of mothers who received full ante-natal care from 24.8% to 32.9% and an increase in institutional births from 64.7% to 94.3%--showing a direct correlation between improvement in maternal health and reduction in child mortality.

The correlation between sanitation and IMR numbers is well documented.

Tripura and West Bengal have seen improvements of sanitation facilities, which have resulted in decreased IMR figures across these states.

West Bengal has seen an increase in the percentage of households with improved sanitation facilities from 34.7% to 50.9%

Female empowerment through literacy and financial inclusion has also helped in reducing infant and maternal mortality. 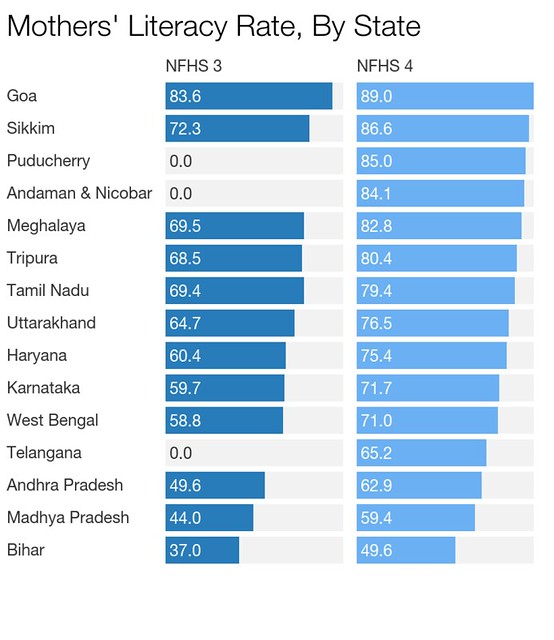 The education of mothers and their ability to make decisions affects infant and child mortality, according to this study published by the UK-based Institute of Development Studies (IDS). This is evident in West Bengal, where female literacy rates rose from 58.8% to 71%, alongside declines in both IMR and U5MR.

One of the reasons for the improvement of status women can also be attributed to their ability to spend their own income. This has been achieved through financial inclusion, which has led to many having their own bank account, the IDS study said.