New Delhi and Lucknow: A fistful of rice with sugar or salt is a standard meal for 10-year-old Asha Yadav these days. On better days, her mother adds some potatoes or dal (lentils) to her plate. A resident of eastern Uttar Pradesh’s Gonda district--among the most backward and poorest in the state’s agricultural belt--Asha is among the 95.1 million children whom the lockdown has deprived of midday meals at school.

On school days, Asha would get at least one wholesome meal--rice, vegetables, milk and fruit--under the Indian government’s Midday Meal Scheme. Since March 24, 2020, school has been shut due to the COVID-19 lockdown, and with it, midday meals.

At the same time, anganwadi (childcare) centres are also closed, and anganwadi and frontline health staff have been diverted to COVID-related work, taking crucial resources away from various health and nutrition programmes.

Lack of proper meals will exacerbate malnutrition among children, exacting long-term adverse impacts on their health and well-being and undoing decades of progress in reducing malnutrition, especially among children.

India had witnessed 1.04 million under-five deaths in 2017. Uttar Pradesh had the highest number of under-five deaths (312,800, including 165,800 neonatal deaths), followed by Bihar (141,500, including 75,300 neonatal deaths). Child malnutrition, along with maternal malnutrition, is a major determinant for these deaths, said K. Srinath Reddy, president of the Public Health Foundation of India, a public-private research initiative, “It should be accorded the highest priority for corrective action.”

IndiaSpend visited 10 villages in four districts of Uttar Pradesh--Gonda, Balrampur, Bahraich and Barabanki--to assess the situation. Children, pregnant women, daily wage workers, health workers and teachers, all told us that with the closure of schools and anganwadi centres, the source of nutritious food for children has shut down.

Child growth failure is measured as per three parameters--stunting (low height for age), wasting (low weight for height), and underweight (low weight for age). In India in 2017, 39% of children under five were stunted, 16% were wasted and 33% were underweight, with Bihar and Uttar Pradesh being home to the highest number of stunted children, according to the first-ever estimates mapping trends from 2000 to 2017 published in The Lancet.

Globally, a further 6,000 under-five children could die each day due to reductions in routine health coverage during the pandemic, the UNICEF warned in early May 2020, adding that this would be accompanied by a corresponding rise in child wasting, which is a strong predictor of child mortality.

These numbers put India behind many developing countries in terms of child morbidity and mortality, said Yogendra Ghorpade, project field coordinator at Towards Advocacy Networking and Development Action, a project of the Tata Institute of Social Sciences. “If we don’t focus on malnutrition during the COVID-19 outbreak, our efforts in reducing child morbidity and mortality will suffer a major setback,” he added.

The COVID-related economic crisis could also push India further away from meeting the World Health Organization’s (WHO) target for reducing stunting by 50% from 2012 to 2030, said experts. Maternal and child malnutrition is one of the reasons for 68% under-five deaths in India, as IndiaSpend reported on May 15, 2020. COVID-19 puts malnourished children at an ever-high risk of death, and for the children who survive, poor growth, development and learning outcomes, according to the UNICEF.

Malnutrition impacts a child’s immune system, making them more vulnerable to infections and as such “malnutrition should be considered as comorbidity”, said Ghorpade. Several children in India die because of many other infectious diseases that are directly linked to malnutrition. “With lack of food during the lockdown, the malnutrition rate is going to increase and ultimately they [children] would be more vulnerable to COVID-19,” he added. Malnutrition, on its own, would also lead to an increase in child deaths and hamper growth and productivity in the long term, which is not good news for India. Children who eat insufficient food lacking in the required nutrients fall sick more often and earn less as adults, effectively keeping them trapped in poverty, as IndiaSpend reported in October 2019.

The centres set up by Integrated Child Development Services (ICDS), the government programme that provides food, preschool education, primary healthcare, immunisation, health check-up and referral services to children under six years and their mothers, “are closed and nutrition is no longer top priority”, said Ghorpade.

“In these difficult times,” a World Bank report in April 2020 said, “these women’s [anganwadi workers’] role in the battle against undernutrition has assumed even greater importance.”

With thousands of migrant workers returning home, anganwadi workers and local accredited social health activists (ASHAs) have been asked to maintain records of those returning home and to monitor them at quarantine centres. 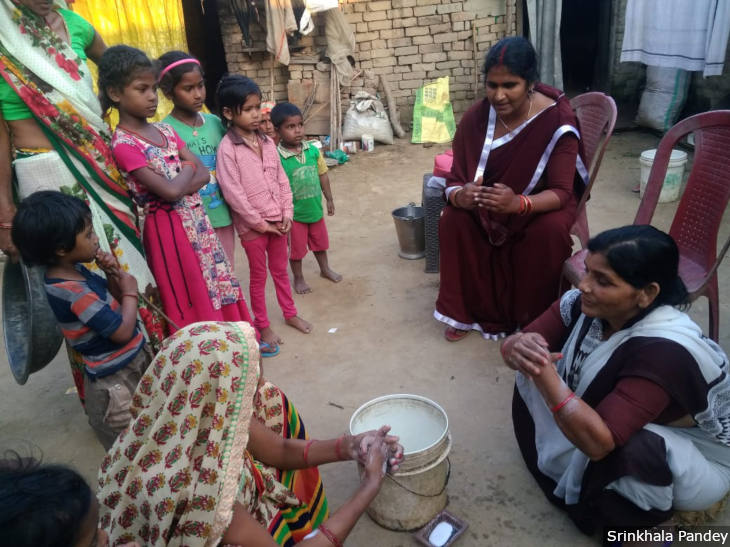 Anganwadi workers and local accredited social health activists exhibit the right technique of washing hands in Quazidewar village in Gonda, Uttar Pradesh. Additional duties during the pandemic have left these workers with little time to focus on nutrition programmes.

“Many families are surviving on salt and chapatis,” said Rachna Mishra, an auxiliary nurse midwife (ANM) at the community health centre in Pandri Kripal block, Gonda, but the availability of food is not the only problem. Younger children need to be sat down and fed, like in school, but parents often do not understand the importance of this. Nutrition services require door-to-door visits, counselling and convincing, which is hard to do with the workload at hand, said Mishra.

Across 10 villages in Uttar Pradesh, IndiaSpend found, most breadwinners were migrant labourers who had returned from Haryana, Delhi, Gujarat and Maharashtra and have no source of income anymore.

A WHO advisory listed fresh fruits, vegetables, legumes, protein and milk as food for infants and young children during the pandemic.

“Even if someone tells me to give fruits and milk to my kids, how could I? There are no jobs in the village,” said Kiran Devi, 30, a mother of three whose husband, a daily-wage labourer in Delhi, is now out of work. “I can only give them what I can afford.” 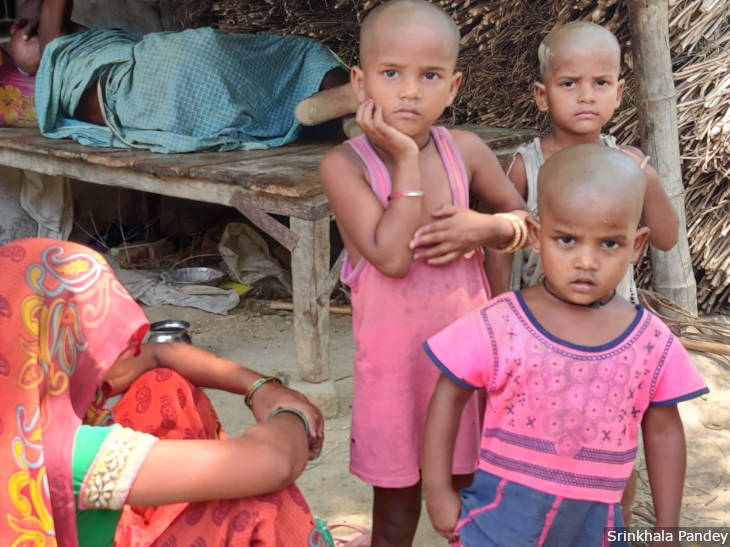 Kiran Devi, 30, a resident of Balrampur in Uttar Pradesh’s Gonda district, has three children and a family of eight to feed. Her husband lost his job during the COVID-induced lockdown and they are struggling to manage two square meals a day.

“I worked in a flour mill in Rajkot, Gujarat; we returned after I lost my job in the lockdown. I don’t have a ration card,” said Rambachan (he uses only one name), 45, from Bahraich district’s Baragaon village, who received 15 kg rice upon his arrival in the village, meant to last for 14 days through his quarantine. This was the only ration they received, which their family of six survived on for over a month. “This is all we have. What do we eat and what do we feed our children?”

Although the central government has ordered that those without ration cards will also get subsidised food grain, Rambachan said there are long, snaking queues outside the PDS (public distribution system that facilitates the supply of food grains and essentials at a subsidised price through fair price shops across the country) shops from 7 a.m. onwards. People whom IndiaSpend spoke to said PDS shops give priority to locals with ration cards. By the time people without ration cards get their turn, some items such as black gram run out.

Sunita Yadav, the mother of 10-year-old Asha from Gonda, said her family of four had received 20 kg rice on April 28, 2020, just once since the lockdown began on March 25, 2020. They have not yet received the 1 kg black gram that they were entitled to as stocks had run out at their local PDS shop. “Potato and rice are all we can afford for now,” Yadav said. 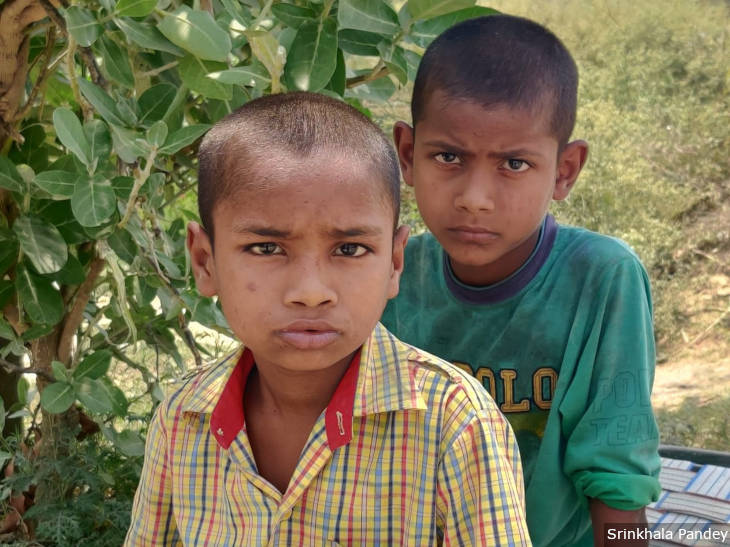 Five-year-old Nizammudin, a resident of Lalchandpur in Uttar Pradesh’s Gonda district, doesn’t remember the last time dal was cooked in his house. He and his brother do not like the bland rice they get every day.

How to tackle malnutrition during COVID-19 outbreak

India must ensure universal access to PDS and enough ration for all who are in need, said Tata Institute of Social Sciences’ Ghorpade. Frontline health workers’ primary focus must be directed back to nutrition programmes, he added.

PDS shops should distribute iron tablets, health supplements and take-home ration along with regular ration, said Aarti Devi, an accredited social health activist at Balrampur’s Nagwa sub-centre in UP. This single-point-collection will make things easier for people and the anganwadi workers a lot of time.

(Tiwari is a principal correspondent with IndiaSpend. Pandey is an independent journalist.)