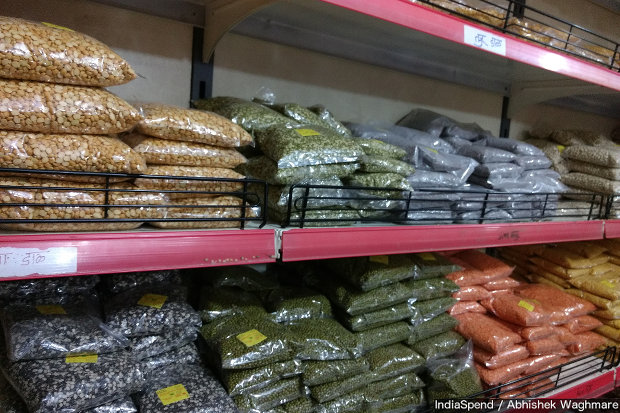 It has as many people as Punjab, and its people are three times poorer. But Narendra Modi became the first prime minister to visit Mozambique in 34 years because the impoverished South African country has something every Indian wants.

But every tonne counts, as imports pouring from 60 countries indicate, from some as little as 1,000 kg, the amount your neighbourhood grocery store might sell in a week.

An important staple food and source of nutrition, pulses available for every Indian have fallen by 3 kg over half a century. With two years of failed monsoons, insufficient irrigation and flawed, over-regulated marketing--prices rise 50% between the farmer and consumer--India's pulses output is at a six-year low, sparking shortages and spiraling prices.

For the first time, imports of pulses in 2015-16 touched $4 billion, a quarter of demand and more than 1% of India’s import bill.

Note: The figures for 2015-16 from Commerce ministry and the Press Information Bureau do not match. The PIB's data are used for the year 2015-16; while 15-year data in this chart are from the commerce ministry.

But why have imports risen over the last two years, when they were fairly constant (between 2.5 to 3 million tonnes ever year) over the last decade ending in 2010?

The answer: The output of pulses for the decade ending 2010 rose, stabilising imports, but two years of drought (2014 and 2015) changed all that.

Indians want more pulses, but yield is among world's lowest

Pulses are also known as grain legumes, a set of 12 crops—from lentils to chickpeas—high in nutrition, particularly important to developing countries like India with rising incomes.

But the prices of pulses are rising in concert with growing demand and falling production. Imports fill the gap.

A perfect storm of colluding reasons is responsible, IndiaSpend reported in October 2016.

Ten months on, nothing has changed, the most important reason being that India's pulses productivity is among the emerging world's lowest. Even poorer Myanmar produces twice as much per hectare, Egypt more than four times as much. Regardless of yield, production is dropping.

The bottom line is a 250% rise (over five years to 2015 in Maharashtra) in the prices of the dal you eat, benefitting the farmer and importer.

Why Sukesh Kode got double the price set by the government

In the arid southeastern Maharashtra district of Latur, Sukesh Kode, 35, is unconcerned that tur output on four acres of his 17-acre unirrigated farm has fallen to 38 quintals this year from 42 quintals in 2015.

After all, he earned twice as much for those 38 quintals, with his return jumping 125% over a year in March 2016, a situation mirrored nationwide.

Ashok Badiya, a wholesale trader of pulses for 50 years in the Vashi Agriculture Produce Market in Mumbai, said that a record pulses output in 2013 mitigated the effect of a drought in 2014, when most farmers were paid between Rs 32 and Rs 35 per kg, below the government-set minimum support price of Rs 40 per kg.

Thus, Kode, the pulses farmer, got Rs 102 per kg for tur he sold in March 2016, more than double the minimum price set by the government.

This year, in April, the wholesaler Badiya said he paid Rs 102 per kg for pulses from farmers in March 2016. From Badiya, the pulses travelled to retailers like Piyush Vora, who owns a 250-sq-ft grocery shop in central Mumbai's Lalbaug neighbourhood.

When prices rose last year, the "immediate reaction" of consumers was to buy less dal, said Vora, who explained that such knee-jerk reactions never last.

"In a couple of weeks, they got used to it," he said. "Neither was there a dip in the sales of dal nor in our profit margins.” Pulses are so central to the Indian diet that middle-class consumers will buy them and cut back on other things. The poor have no option but to eat fewer pulses, as this editorial in The Hindu explained.

A good monsoon, in general, keeps prices steady, and a bad monsoon increases imports and prices, as the chart below makes clear.

To encourage farmers to grow more pulses and keep prices in check, the government has increased the minimum support price for pulses to more than Rs 50 per kg for the summer crop of 2016-17, 8% more than last year.

The Maharashtra government on July 5, 2016 decided to sell a kg of tur dal per month to poor families at a subsidised rate of Rs 120 per kg (against a retail price around Rs 180 per kg).

But these are temporary measures. With irrigation uncertain and farmers reluctant to grow more pulses, Mozambique will continue to remain of interest to India.