Maharashtra, UP Show India What To Expect From GST 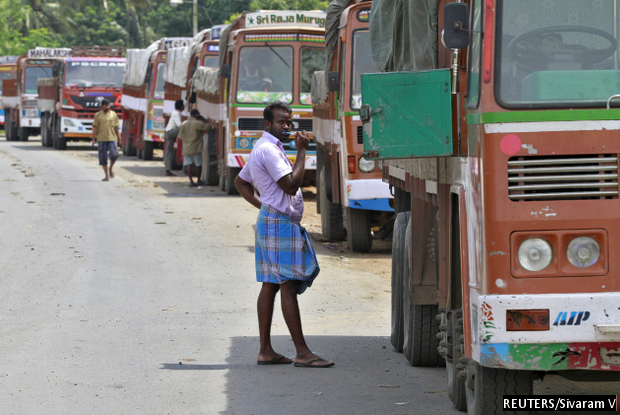 A truck driver next to his parked truck while waiting to get his loads cleared to cross a checkpoint at the Commercial Taxes Department check post at Walayar in Palakkad district in southern Indian state of Kerala, India. At the Walayar checkpoint, lines of idle trucks stretch as far as the eye can see in both directions along the tree-lined interstate highway, waiting for clearance from tax inspectors that can take days to complete.

Maharashtra, India's most industrialised state, and Uttar Pradesh (UP), the most populous, expect to get at least Rs 60,000 crore and Rs 65,000 crore, respectively, per year, once the Centre implements the goods and services tax (GST), the economy's most awaited indirect tax reform.

These sums, calculated by IndiaSpend based on data from the Reserve Bank of India’s Study of State Finances, are almost equal to the revenue Maharashtra and UP currently receive through a host of taxes, which will be replaced once GST is implemented.

This means the GST should make sense financially, but, politically, it is a hot potato, with the Centre getting a far larger domain of India's tax administration.

“Either there should be an equally potent revenue generating option for Mumbai (like octroi) or the Centre should compensate for that as well,” Maharashtra Finance Minister Sudhir Mungantivar of the Bharatiya Janata Party (BJP) told IndiaSpend.

He said he hoped that the Centre would agree to the state’s demands of compensation in case of lost revenue, as well as a 1% additional levy to account for its manufacturing-state status.

Expected Revenue Through GST, Based On Tax Revenue, 2014-15

Not subsumed Under GST

Not Subsumed Under GST

Taxes on Property and Capital Transactions

Taxes on Goods and Passengers

Taxes and Duties on Electricity

Other Taxes and Duties

Other Taxes and Duties on Commodities and Services

[1] Sales tax on petroleum products, [2] Proportion of basic customs duty has been assumed as 25% of total customs duty, as per national revenue statistics

(Note: State Revenue Receipts through Alcohol, Tobacco and allied products have been considered subsumed under GST on account of Data unavailability.)

This is what Mahindra Group chairman Anand Mahindra said about GST:

Simplest way I know of understanding the significance of the GS Tax: In a fragile world,India's Brahmastra is its huge domestic market (1/2)

Without GST we effectively divide our own country & prevent it being a common market. We render ineffective our own secret weapon.(2/2)

The key challenge for the central government is to ensure both Centre and states benefit from the GST; in other words, get as much or more money than they currently do.

The current GST proposal addresses the revenue shortfall of states for three years from inception. A select committee of the Rajya Sabha (the upper house of Parliament) has demanded five years, a provision it wants included in the proposed GST Act.

Why the GST is a challenge for the states

The GST is expected to simplify India's indirect tax regime in the country, condensing as many as 14 taxes into one, and, in doing so, create a common Indian market and spur economic growth.

The Centre is likely to compensate states for lost revenue on 'goods' by increasing their share of taxes on services, according to an analysis by the Institution of Chartered Accountants of India (ICAI).

Indian states cannot afford to lose revenue because they are already in debt, as IndiaSpend reported.

States will have to find new ways to repay debt and interest, since the taxes they levy, for example, value added tax (VAT), entry tax and entertainment tax, in short, a host of taxes, will be replaced by the GST.

The taxes that will fall to the GST

Industries and commercial enterprises currently pay various taxes at various stages of a product or service, such as manufacture, transport, wholesale, logistics and retail.

Most of these taxes will be subsumed by the GST, barring a few, such as those on vehicles, roads, property and electricity.

Excise Duty levied under the Medicinal and Toiletries Preparation Act

Octroi and Entry Tax (all forms)

Taxes on lottery, betting and gambling

Cesses and surcharges in so far as they relate to supply of goods and services.

State cesses and surcharges in so far as they relate to supply of goods and services.

Taxes Not Subsumed Under GST

As a number of taxes are being added and packaged into a single tax, the resulting revenue neutral rate (RNR) for GST will be higher than any other constituent tax paid till now by enterprises. RNR is an adjusted rate at which there is no loss of revenue to the tax collection agency.

If the GST charges less tax than the central and state taxes subsumed, the resulting economic situation would not be inflationary, Deputy Governor of the Reserve Bank of India Dr. Urjit Patel told researchers recently.

Around Rs 9.20 lakh crore ($137 billion) of this comes from taxes likely to be subsumed by the GST. As much as Rs 13.5 lakh crore ($202 billion) will come from sources not being subsumed under GST, such as direct taxes, state excise, stamp duties, etc.

Taxes on goods and Passengers

Taxes on purchase of Sugarcane

(Other taxes have been considered under sources not subsumed, although some might have been included in the GST.)

A rate of 15-16% can serve as a revenue neutral rate for the GST, according to the latest report submitted by a committee under Chief Economic Advisor to the Finance Minister.

The standard rate of GST (rate at which goods and services will be actually taxed) could be between 17% and 19%, which is to be decided (and modified) by the GST Council.

How will the GST work?

A GST council will control the new tax regime across Centre and states; it will fix tax rates, exemptions and other issues. The Centre's representatives control a third of the vote in the council.

Two central representatives (Finance Minister and Minister of State for Finance) account for 33.3% of the vote, while 29 finance ministers account for the remaining 66.7% vote, according to the 122nd Constitutional Amendment Bill passed in the Lok Sabha (lower house of Parliament).

Tax proposals, exceptions and exemptions can be passed in the GST council only with three-fourths of the members present and voting.

Why the GST is a political hot potato

The GST will allow the Centre to wrest more control of India's tax administration from the states, reducing their economic bargaining power and administrative flexibility.

It will imply a "new federalism", as this column in The Indian Express described it.

If a higher percentage of manufactured goods and services are taxed under the GST regime, final prices of products might increase in the short term; the positive effects of GST might show up only later.

An extended period of high inflation, against the backdrop of Reserve Bank estimates of 6% in 2016 and 5% in 2017, might affect the electoral prospects of the BJP in the 2019 general elections to the Lok Sabha.

Reserve Bank of India Governor Raghuram Rajan, while speaking on structural reforms in economy at a conference in Mumbai, quoted former Prime Minister of Luxembourg Jean Claude Junker: "We all know what to do (structural reform); we just don’t know how to get re-elected after we’ve done it."