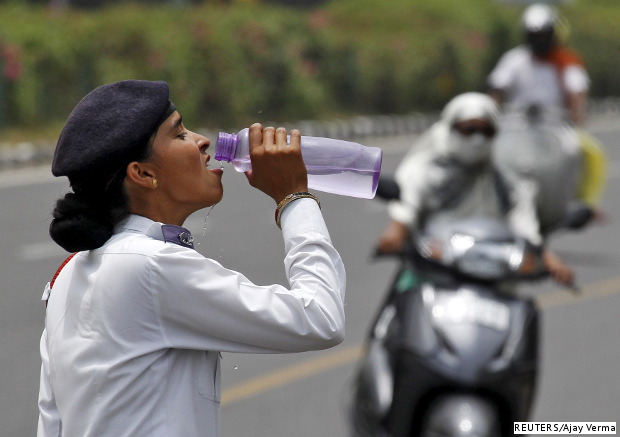 A traffic police woman in Chandigarh trying to get some relief from the heat with a drink of water.

With more than 2,300 dead in extremely hot weather across India, a recent Indian Institute of Technology-Bombay (IIT-B) study predicts more intense and longer heat waves, more often and earlier in the year in future.

In a changing climate, newer areas, including large swathes of southern India and both coasts--hitherto unaffected--will be severely hit, resulting in more heat stress and deaths, said the study, published in the journal Regional Environmental Change.

“From climate model projections, we have pointed out that there is a possibility of high occurrences of heat waves in South India in future,” Subimal Ghosh, associate professor at the Department of Civil Engineering, IIT-B, and one of the paper's authors, told IndiaSpend.

Heat waves in a warming world

Such a forecast is in line with global and Indian studies.

Other recent assessments have predicted that intense heat waves will grow with rising global temperatures, up by 0.9 °C since the start of the 20th century.

The Intergovernmental Panel on Climate Change (IPCC) records that from 1906 to 2005, the mean annual global surface-air temperature increased by about 0.74 °C (land-surface air temperature increases more than sea-surface temperature). As a result, there will be significant changes in the frequency and intensity of extreme weather events, including heat waves, as IPCC’s 2014 report warns.

“It is difficult to directly link this present single-year high heat-wave occurrence to climate change," said Ghosh. "However, there is a good possibility that such heat waves may indicate the adverse impacts of global warming.”

A rise in the frequency and intensity of heat waves would increase the risk of heat stroke and heat exhaustion, and even deaths from hot weather, the IIT-B team predicted, echoing concerns raised by IPCC scientists.

With a large proportion of people without sufficient access to water, electricity and primary healthcare facilities, India could be very vulnerable to heat waves, the study noted.

“Heat waves are an important class of climate hazard that may have serious consequences on health and ecosystem, keeping existing vulnerabilities of population in mind,” says Kamal Kumar Murari, the lead author of the study and an IIT-B doctoral candidate. “Our findings highlight the need to better understand the direct temperature-related consequences in order to develop better adaptation strategies.”

The IIT-B study is important because it is particularly exhaustive.

Murari and his colleagues used daily temperature data over 40 years (1969-2009) from 395 weather stations across India. They also used climate-change simulations of seven Earth System Models (ESM), which combine the interactions of atmosphere, ocean, land, ice, and biosphere under a wide variety of conditions. In addition, they used US National Center for Atmospheric Research data on daily relative humidity and data on heat-stress analysis.

Based on these datasets, the IIT-B team estimated the potential impact of future heat waves on mortality using historical data from India's Ministry of Home Affairs.

The team projected intensity, duration and frequency of severe heat waves for low, middle and high range rates of climate change as shown in long-term projections called representative concentration pathways (RCPs). RCPs are four greenhouse gas concentration trajectories that climate modellers use to describe possible climate futures (see table). Each pathway notes how much the planet has heated up and the concentration of greenhouse gases doing the heating.

The IIT-B team took RCP26, a projection consistent with the goal to hold global warming to 2 °C, showing a peak and a decline in warming; RCP45, considered the most probable case; and RCP85, possibly the worst-case scenario.

Under the most probable-case and the worst-case scenarios, 2070 onward, there could be an increase in intensity, duration and frequency of severe heat waves.

In particular, a large part of southern India, east and west coasts, which have been unaffected by heat waves, are projected to be severely affected after 2070. 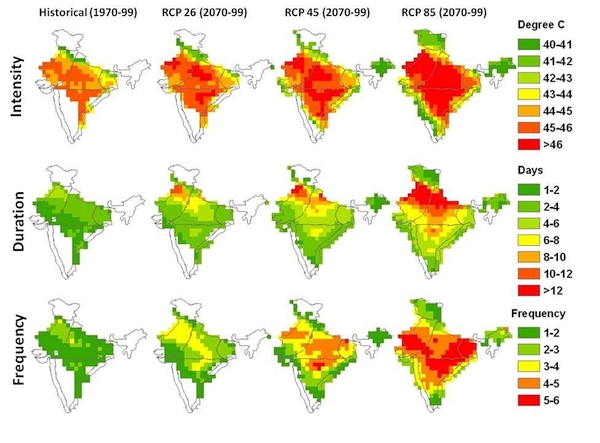 Severe heat waves are expected to appear early in future years, starting in early April, under the worst-case scenario. A sizeable part of India is also projected to be exposed to extreme heat-stress conditions, intensification of heat wave and heat-stress leading to increased mortality.

Heat-stress is a condition in which the body cannot cool off to maintain a healthy temperature–resulting in rashes, cramps, dizziness or fainting, exhaustion, heat stroke, and a worsening of existing medical conditions.

The IIT-B study follows other studies that have also shown an increasing trend in heat waves.

Dr D S Pai, who heads the Long Range Forecasting division at the National Climate Centre, Pune, and his colleagues at the India Meteorological Department (IMD), have shown a noticeable increase in the heat wave and severe heat-wave days over the country during 2001-2010 –the warmest decade recorded– compared to the previous four decades.

The IMD team used heat-wave information from 103 stations on the Indian mainland during the hot-weather season of March to July over the past 50 years (1961-2010). They examined various statistical aspects of heat waves and severe heat waves, such as long-term climatology, decadal variation, and long-term trends. 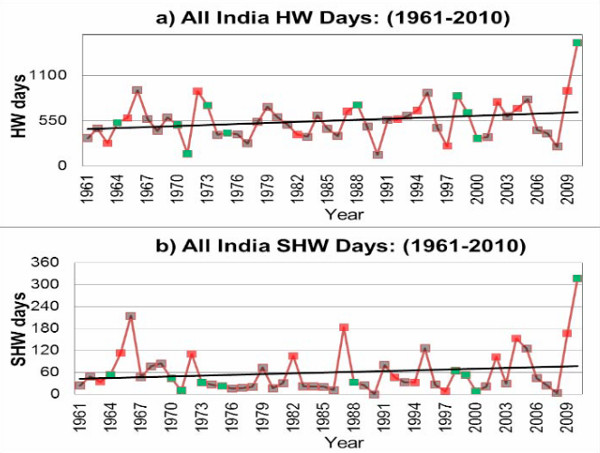 The IMD team found other factors linked to heat-wave dynamics, including the annual path of the sun; moisture distribution across India and how it is influenced by seas on its either side and the arrival of the monsoon.

Arrival of the monsoon over north India marks the end of the hot weather season. In 1998 and 2002 when the monsoon was delayed, long heat-wave conditions prevailed here.

As the geographic spread of heat waves and trends change, weather scientists stress the need for better forecasts and more rigorous research.

“The present assessment could be a good starting point for considering heat waves as a disaster, even though they do not yet appears in the priorities of disaster-management plans of the Government of India,” said Murari. ¦

The average pre-monsoon warm season daily temperature of 1970-1999 is defined as the normal temperature.

These are the criteria used by India Meteorological Department (IMD) for defining heat wave and severe heat wave:

1. Heat wave need not be considered till maximum temperature of the stations reaches at least 40 °C for plains and at least 30 °C for hilly regions.

2. When normal maximum temperature of a station is less than or equal to 40 °C:

3. When normal maximum temperature of a station is more than 40 °C:

5. For coastal stations if the maximum temperature of 40 °C is reached, “heat wave” may be declared.