Srinagar: In the first week of April every year, Basharat Ali, 50, leaves his home in Chadwa village of Udhampur district in Jammu along with his flock of around 800 sheep on a 50-day trek through the Pir Panjal range to the high-altitude pastures of Gurez in northern Kashmir. His family follows him in hired trucks, with tents, food and essentials, along with around 300 goats and a couple of buffaloes.

This clan of Bakarwals, the nomadic pastoralists of Jammu and Kashmir, will then follow well-worn mountain trails, setting up camps and allowing their animals to graze in the rich Himalayan pastures until the start of autumn. Around September, they will wind their way down. For the animals, especially the sheep, this escape from the summer heat of the plains and its dry grasslands is a must.

This year, however, the nationwide lockdown to curb the spread of COVID-19 has disrupted the long spring migration of hundreds of thousands of Bakarwals and Gujjars, another nomadic pastoral tribe. Almost half of them are only starting out now, nearly a month late, after the government gave full permission on April 23, 2020, for the pastoralists to use vehicles to transport their families and animals. IndiaSpend has reviewed copies of the permits.

This delay will have a cascading effect on the lives of the nomadic communities and their traditional businesses, which are closely aligned with the seasons, festivals and land use patterns of the region.

The biggest impact of the delayed ‘transhumance’ (seasonal migration of livestock) will be reduced food availability for the animals, said Javaid Rahi, an expert on the nomadic pastoral tribes of the region and a member of the community himself. “Those who migrate late will end up spending most of their time travelling,” said Rahi. “They won’t be able to cover all the pastures in time, which means the livestock won’t get enough grass to eat.”

The Bakarwals mostly rear the Australian Merino breed and local Poonchi and Kernai sheep, which cannot stand summer temperatures of the plains. “These breeds are used to colder regions and if the migration doesn’t start in time, the Bakarwals and Gujjars will have to face major losses in coming days,” Rahi said.

The migration of Gujjars and Bakarwals will continue to be impacted until the contagion subsides, said Abdul Salam Mir, director, Department of Sheep Husbandry, Kashmir. “If more people migrate, it can be problematic: They have to restrict their number till Kashmir becomes COVID-19-free,” Mir said, pointing out that facilitation and medical centres have been set up for the herders.

The Bakarwals now fear having to pass COVID-hit red zones along the way, community representatives told IndiaSpend. Jammu and Kashmir has already reported more cases of the infection (565) than its neighbours Punjab (342) and Himachal Pradesh (41), as of April 28.

Up to 1.5 million Gujjars and Bakarwals live in Jammu and Kashmir and Ladakh, around 11.9% of the region’s total population (12.5 million), as per the 2011 Census. In Jammu, the 810,800 Gujjar and Bakarwals comprise more than 54% of the tribal population. The other nomadic herders in the state are the Gaddis and the Sippis, but their seasonal migration is limited and only across districts. 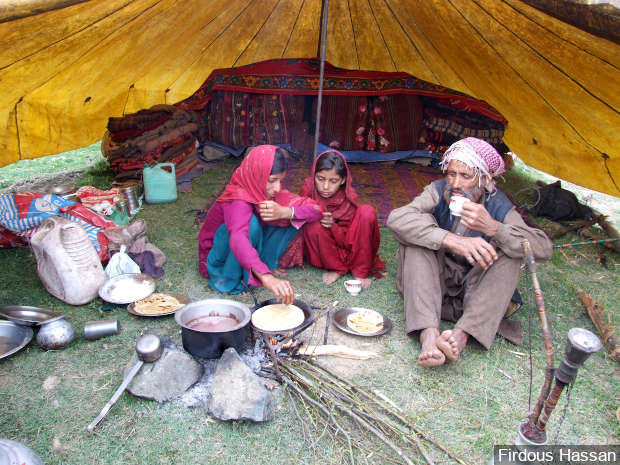 A Bakarwal family preparing food in a makeshift tent on the outskirts of Srinagar.

Deputy commissioners across Jammu and Kashmir have been directed to facilitate the migration of Gujjars and Bakarwals, Jammu and Kashmir spokesperson Rohit Kansal told IndiaSpend. “We have passed the orders,” he said.

But Tanveer Ahmad, a resident of Udhampur who took his herd of 400 sheep, reported from Rajouri that he was getting distress calls from community members who had run out of provisions and medical supplies. “There is no shop that is open--we are managing with what we took from home and we are afraid to enter localities for fear of the virus,” he said. “The government has failed to set up medical facilities and hasn’t even deputed enough officials to provide ration and food packets.”

Around 800,000 Bakarwals and Gujjars, nearly 50% of the state’s nomadic population, had been left behind in Jammu because of partial permission to migrate in early April 2020, Zaid Parwaz Choudhary, the president of the Gujjar Bakarwal Welfare Conference, told IndiaSpend.

On March 21, 2020, restrictions were imposed under Section 144 throughout Jammu and Kashmir to prevent the spread of the pandemic. By April 16, 2020, the government had eased the rules enough to allow migration. But two days later, on April 18, 2020, an advisory followed from the Department of Sheep Husbandry of Kashmir declaring that the families of the herders--including the elderly, women and children--should not be allowed to travel, in order to prevent chances of infection.

“All can join them only after the pandemic is over,” the advisory said. It also suggested that the Gujjars and Bakarwals “establish separate transit camps en route their migration” and that “intermingling of transit camps should altogether be avoided”.

For the tribes, this annual journey is unthinkable without their clans. “Migration for the Bakarwals and Gujjars means our entire dera (settlement) along with families moves,” said Ali who will be accompanied by an associate instead of his family.

So set are the patterns and timing of the migration that by the time the lockdown was enforced on March 24, 2020, Basharat Ali had already assembled all that he needed for the six-month trek with his animals. His clothes were in a cloth bag and his family had packed essentials such as rice, oil and a few dried vegetables in a jute bag. The provisions were enough for two weeks, when he hoped the lockdown would end.

Another advisory from the deputy commissioner of Rajouri district asked for written permits for movement (mattoos) from tehsildars. The process of securing permits further delayed the migration schedules, said Basharat Ali.

This delay could have a serious impact on the wellbeing of the animals, said the Bakarwals. The temperatures in the Jammu region had risen above 30 degree Celsius and the jungles were overrun with herbs, some of which, the shepherds believe, are poisonous for the animals. So families were taking turns to visit surrounding forests to collect fodder.

Kalakote resident Mohammad Farooq, 65, and his two brothers, Mohammad Ibrahim (60) and Mohammad Sarfaraz (35), had no choice but to trek to the neighbouring jungle and collect fodder for their livestock because they were afraid of letting their animals graze on poisonous outgrowth.

“The concerned tehsildar has not issued us permission to graze our sheep,” said Farooq. “Even vehicles are not allowed yet to ferry our livestock and families.”

‘Our movement allows for social distancing’

In Basharat Ali’s village in Majalta block, only 1,500 of the 3,000 Bakarwals had started migrating and that too without their families. Those left behind who can now leave were worried about passing localities that have reported COVID-19 cases, said Chaudhary Mohammad Iqbal Phambra, the area representative of the Bakarwals.

The manner in which the herders migrate anyway allows for social distancing, said Phambra. “Shepherds migrate with the sheep, while their goats and cows are ferried in vehicles,” he explained. “Once we reach our destination, each family sets up its own temporary tent. Only three or four men manage the movement of the sheep.”

The use of vehicles actually helps maintain social distancing, he said. “We don’t need to pass populated areas or stay there, we reach our destination directly,” he pointed out.

On April 16, 2020, the Jammu and Kashmir Board for Development of Gujjars and Bakarwals had suggested to the police department that the vehicles of migrating families be allowed to pass through the highway linking Jammu to Kashmir. “You are requested to issue necessary directions for hassle-free movement of these families along with the vehicles for transportation of pet animals and family members of the migratory families,” the letter said. But the state had not relented.

When the Bakarwals are in Jammu, they lease grazing lands from local farmers, who cannot cultivate these lands during the winter. But since the migration has been delayed, the farmers have started sowing maize and wheat in Jammu, and the livestock are no longer allowed to graze in the fields, said Chowdhary of the Gujjar Bakarwal Welfare Conference.

“Now that these fields are being used for cultivating crops, the livestock of the Gujjars and Bakarwals are starving in Jammu areas,” said Chowdhary.

Normally, the Bakarwals could pay extra to the farmers to extend the lease, said Kavita Suri of Jammu University who has done extensive research on the Gujjar and Bakarwal communities. The money for the lease comes from the sale of animals, however, which has not been possible this year, said Suri, who has authored the book, The Gujjars and Bakkarwals of J&K: In the Shadows of Conflict. “While returning from the pastures in Kashmir, they sell their sheep for Eid festivities and this pays them enough to lease the lands in Jammu and to manage their daily expenses,” she said.

Pastures in Jammu region have already shrunk over the years, said researcher Javed Rahi, due to the implementation of the J&K State Lands (vesting of ownership to the occupants) Act of 2001, popularly referred to as the Roshni scheme. Under this, the government vested the ownership of land in its occupants and consequently most grazing lands were given over to commercial purposes over the last 10 years. The Act was scrapped in November 2018 but the Bakarwals said that the damage was done.

(Firdous Hassan is a Srinagar-based journalist and filmmaker.)