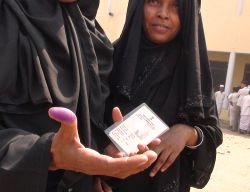 With India’s general elections just 10 days away, there is a hue and cry about women participation in the electoral process. A recent IndiaSpend report found that there has been literally no change in the proportion of women voters over the last 40 years.

So what affects women voting patterns? What are the other factors at play? Is literacy a factor too? Thus, is there a link between education and participation of women in the political arena, both as candidates and as voters?

Let’s start with some base numbers. Census 2011 data shows that the number of educated females has increased from 54.1% in 2001 to 65.4% in 2011. Thus, there has been an 8.6 percentage point rise in women literacy in India from 2001 to 2011. Further, Kerala has the highest literacy rate of 92% among females followed by Himachal Pradesh with 73% while Rajasthan had the lowest literacy rate of 52.7% among females followed by Bihar with 53.3%.

Now, we are defining political participation as voting in elections and contesting as candidates in elections. For our analysis, we will be looking at the general elections of 2004 and 2009. At first, we will look at the polling percentages in the states with high female literacy rates. 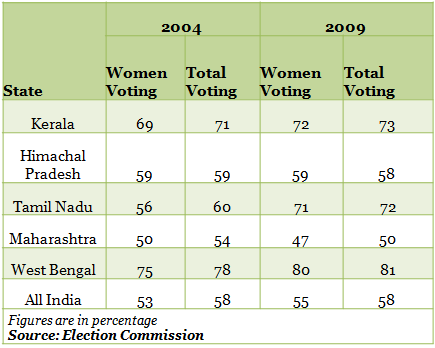 If we look at the states with high female literacy, polling percentages among female voters is much better than the national average. West Bengal shows the best performance with respect to female polling percentage with 75% in 2004 and 80% in 2009. 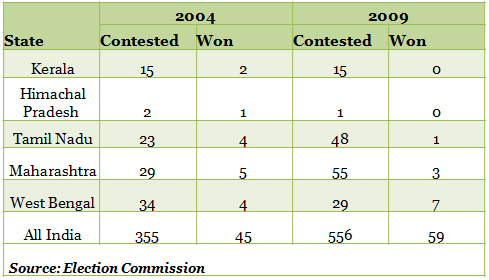 The table above shows the number of female candidates who contested and won the elections in 2004 and 2009 within the states with high female literacy. At the national level, we can see that more females contested in 2009 than in 2004.However, the winning percentage of female candidates has gone down from 12.6% in 2004 to 10% in 2009.

Let us now look at states with low female literacy. 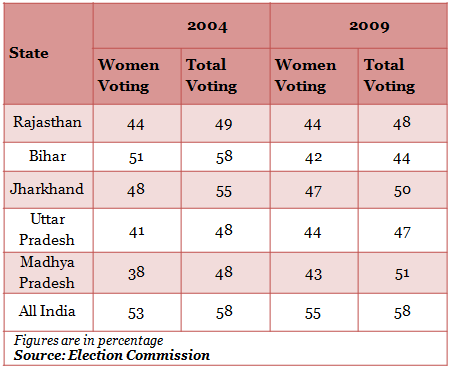 If we look at the states with low female literacy, the polling percentages among female voters is much lower than the national average. Bihar shows the best performance with respect to female polling percentage with 51% in 2004 and Jharkhand with 47% in 2009. 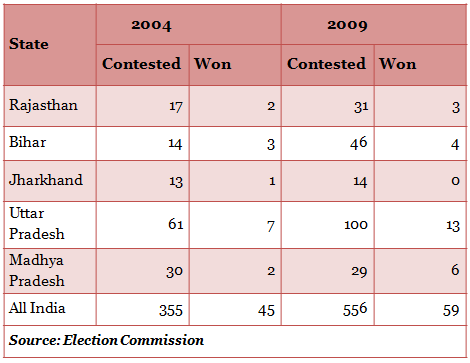 We can see that most states with low female literacy rates have actually seen an increase in the number of female candidates. And the number of winners has also seen an improvement.