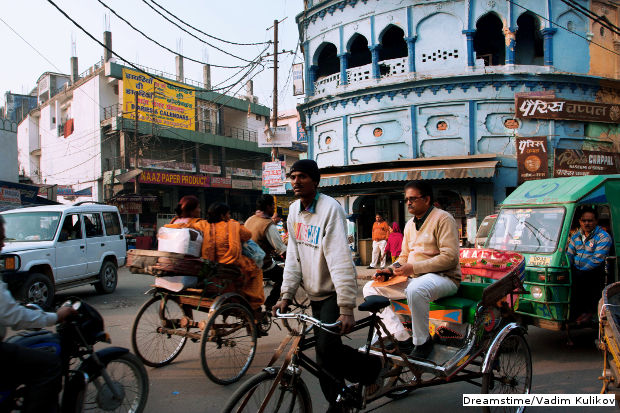 If you look at some statistics, the answer is yes.

UP has a reputation for widespread mis-governance, but official data reveal lower disease outbreaks, lower crimes and lower accidents than the other states we mentioned.

And so unfolds a story of lies, damned lies and statistics.

In a recent question in Parliament's upper house, the Rajya Sabha, the government released data on outbreaks of epidemic diseases in 2014. The data relate to diseases, such as diarrohea, cholera and malaria.

Maharashtra comes off the worst across India, with 204 outbreaks of infectious diseases. Uttar Pradesh, which, with 199 million people, has a population 77% larger than Maharashtra, reported just 35 outbreaks.

States like Tamil Nadu and Karnataka with a population of 72 million and 61 million, respectively, saw many more disease outbreaks.

The information can be interpreted in two ways. The more apparent conclusion is that UP does a better job of controlling infectious diseases than most other large states.

However, the numbers do not add up.

On measures such as maternal and infant mortality and life expectancy at birth, UP fares much worse compared to most of these states. These numbers seem to indicate that healthcare is much worse in UP than in other states.

The more cynical explanation is that UP under-reports data on disease outbreaks. However, deaths are hard to cover up; so data for maternal and infant deaths help reveal the true picture. 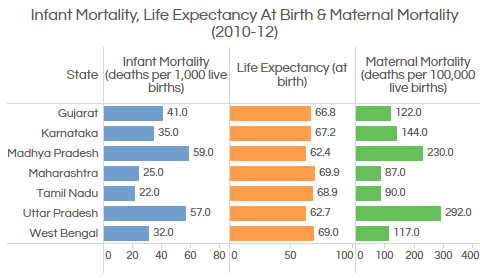 Another answer placed before the Rajya Sabha provides statistics for the number of rape cases registered across different states.

The data on rape indicate that Rajasthan and MP have four and five times the crime rate of UP respectively and that women are safer in UP compared to other North Indian states.

However, this doesn’t seem to extend to other violent crimes.

For instance, the number of murder cases in UP is more than twice that of MP and more than three times the figure for Rajasthan.

The more cynical explanation, again, is that rape cases are severely under-reported in UP.

It is widely believed that such cases are severely under-reported across India, but the problem seems much worse in UP. In the case of a murder, since there is a dead body that cannot be wished away, or the deed otherwise suppressed, the crime has to be registered.

Going by these statistics, under-reporting of rape cases appears rampant in Bihar as well. Although Bihar has 103 million people, compared to MP's 72 million, the number of rape cases registered in Bihar is a fourth that of MP. The number of murders is more closely in line with the population.

These statistical inconsistencies are also evident in other areas. Consider traffic accidents across major cities, for instance. 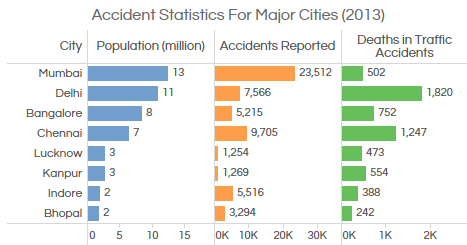 Does this mean drivers in Lucknow are more careful than those in Bhopal?

The number of road accident deaths in Lucknow is almost twice that of Bhopal. Does this mean, perhaps, while there are fewer accidents in Lucknow or Kanpur, those that happen lead to more deaths?

What these numbers probably indicate is that accidents are under-reported in Lucknow and Kanpur. As with murder, if there has been a fatality in an accident, the dead body cannot be wished away and the case must be recorded.

The under-reporting of accidents also occurs in other metropolitan cities, led by India's capital.

For instance, Mumbai and Delhi have similar populations, 12 million and 11 million, respectively; Delhi has far more vehicles, but Mumbai recorded thrice as many accidents.

Does this mean Mumbai drivers are more reckless?

Not necessarily because the number of fatalities in road accidents in Delhi is 260% higher. It just means Mumbai does a better job at reporting accidents than Delhi, which has a term for under-reporting by the police: burking.

The larger point is that statistics collected by state governments can be and are easily fudged. To bring down crime or disease, we first need to report it accurately, which does not appear to be happening in large parts of India.