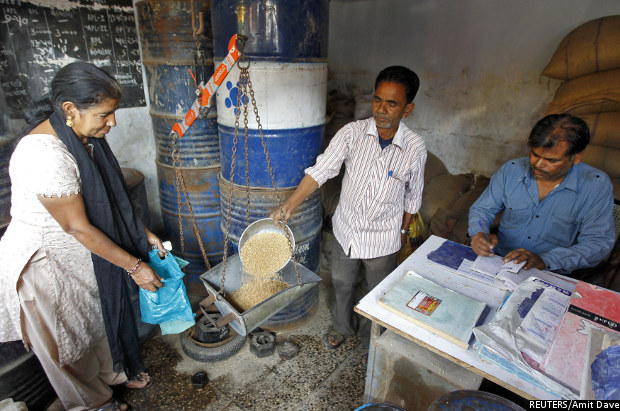 Only 16 of 29 states and seven union territories had digitised the leaky ration-card system of the world's largest programme to distribute subsidised food, the targeted public distribution system (TDPS), by the end of April 2015, according to the latest-available government data.

Nearly half of 55.45 million metric tonne foodgrain despatched for sale to more than 99 million families never reaches them, according to this 2015 paper (using 2011 data) by Ashok Gulati and Shweta Saini of the Indian Council for Research on International Economic Relations.

Cutting leaks in food subsidies is important to restrict government spending, which grows the fiscal deficit and reduces money available to build infrastructure.

The digitisation programme includes computer tracking of foodgrain, from warehouse despatch to customer delivery, a transparency portal that reveals foodgrain and subsidy details, an online grievance-redressal mechanism, and a toll-free helpline.

The TDPS is supposed to benefit 65.2 million families below the official poverty line (the ability to spend Rs 1,000 per month per person in urban areas and Rs 816 per month in rural areas) and 24.2 million families described as the "poorest of the poor", beneficiaries registered under the Antyodaya Anna Yojana (AAY).

The TPDS was started in June 1997 to “benefit the poor and keep the budgetary food subsidies under control”, after the earlier PDS system, which was a general entitlement scheme for all consumers, whether billionaire or pauper, was deemed a failure.

“The digitisation process is working towards plugging the pilferage of food items meant for distribution to the poor people," said Syed S. Kazi, in this case study on e-governance. "Besides monitoring the movement of grains, an automated computerised system is also helping to eliminate the chances of preparing duplicate ration-cards and also ensure that there are no human interventions in the maintenance of the records.”

Food subsidies soar, as does farm distress. Cuts can only come from stopping leaks

In 2013, the previous Congress-led government enacted the National Food Security Act 2013, which entitles the 99.4 million households we mentioned to 5 kg of subsidised foodgrain per person per month. The AAY offers its beneficiaries 35 kg foodgrain per family per month.

Although the Bharatiya Janata Party, which now runs the government, wanted to oppose the subsidised-food law then, it did not, fearing a political backlash, as the Economic Times reported. Now, with farm distress worsening across India, there is little chance of a cutback.

Among the 16 states that have completed ration-card digitisation, 12 states and Delhi have implemented the online allocation of foodgrain.

Only five states (Bihar, Chhattisgarh, Tamil Nadu, Goa and Karnataka) and Delhi have completed the computerisation of TPDS supply chain.

For status of online allocation, digitisation of supply chain, setting up of online grievance, transparency portal and a toll-free helpline, click here.

Odisha has done the least work among the states, digitising no more than 3% of its ration-cards.

Tamil Nadu has completed 100% ration-card-data digitisation and implemented other components of the programme, but has yet to set up a transparency portal, an online grievance redressal mechanism and a toll-free helpline.

Ghosts in the system: Plugging loopholes in public distribution

The largest percentage of ghosts, 20.58%, was reported in Karnataka, none in Andhra Pradesh, Punjab and Rajasthan.

The largest leaks in the entire system were reported in Bihar and Punjab, where 75% of all foodgrain never reached beneficiaries.

Manipur reported the largest leaks at warehouses, 97.8%. Chhattisgarh had no leaks, due to an acclaimed computerisation that began 12 years ago.

The most foodgrain from Central government stocks leaks from Uttar Pradesh, 15.3%. It is here that one of India's poorest regions, Bundelkhand, illustrates why a robust TPDS is important--not just to save the government money, but to save lives.

Why plugging leakages is especially important in Bundelkhand

Hit by successive droughts, farm failures, farmer suicides and endemic poverty, as IndiaSpend has reported, the subsidised-food programme is vital to Bundelkhand, an arid land of 13 districts spread across south-western UP and north-central Madhya Pradesh.

Although vulnerable to drought, Bundelkhand has usually performed better than the state average in per capita availability of foodgrain, according to this report, based on data from 1997-98 to 2005-06, by A K Singh, A Joshi and Nomita P Kumar of the Giri Institute of Development Studies.

“The real problem seems to be that of access of the poor to food,” the report said.

No more than 42% of the poorest households surveyed had cards that would allow them food-subsidy benefits, according to this survey by Swaraj Abhiyan, an activist group.

As many as 60% of surveyed households did not have access to rice and wheat distributed under TPDS. As many as 38% villages reported at least one death from hunger or malnutrition.

End-to-end computerisation is an important step in ensuring subsidised foodgrain reaches those it is meant to reach, reducing the money the government spends in trying to do this and, eventually, benefitting millions of India's poorest people.