Laws Approved By Parliament Take 261 days To Be Enforced 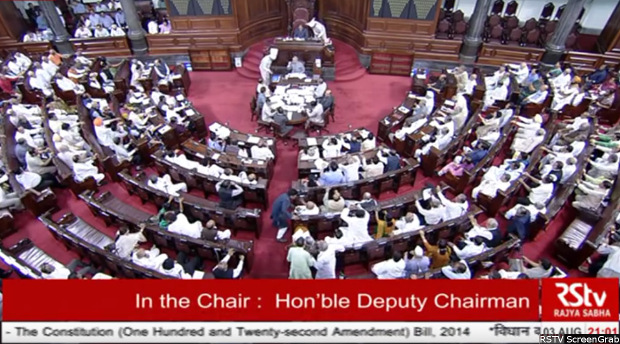 It takes an average of 261 days for a parliamentary law to come into force, according to a report by Vidhi Centre for Legal Policy, a think-tank.

The report analysed 44 laws enacted by the Parliament between 2006 and 2015 and calculated the average number of days between a law receiving presidential assent and coming into force.

More than half of the laws analysed entered into force within six months.

After receiving presidential assent, implementation of the law requires two more steps. First, the government must bring it into force through notification in the Official Gazette. The second step - which is not essential but integral to the practical working of the law - is the framing of rules. Most laws require rules in accordance with the law--for its implementation--approved by the legislature, before they are presented to each house of parliament.

“Most members of Parliament (MPs) are unaware of how long it takes for rules to be framed for bringing a law into force,” Shashi Tharoor, Member of Parliament from Thiruvananthapuram, said in an email interview to IndiaSpend. “Though the rules are supposed to be tabled in Parliament, they are almost never discussed. So, they pass by unnoticed among the welter of other papers laid on the table by ministers.”

As many as 92 hours of Lok Sabha disruption cost India Rs 144 crore during the 10th session of the current Lok Sabha, which ended on 16th December 2016, IndiaSpend reported in December 2016.

The delay in implementing the laws is an issue of betraying public expectations rather than wasting tax payer’s money, added Tharoor.

“The public sees from media reporting that a law has been passed or changed, and naturally expects that what they have read in the newspapers is the new reality. It is wrong to keep them waiting for 261 days to adjust to what they are told is the law of the land," Tharoor said.

The Black Money (Undisclosed Foreign Income and Assets) and Imposition of Tax Act 2015 took 311 days (more than 10 months) to get implemented.

As many as 644 declarations of undisclosed foreign income and assets were received under this act, and Rs 2,428 crore was collected in taxes. 90% of the collection came from 5% of declarations, Indian Express reported in July 2016.

Another important bill, the Aadhaar (Targeted Delivery of Financial and Other Subsidies, Benefits and Services) Act, 2016, was passed in the budget session of the Parliament (in March 2016) but the notification of its provisions began only in September after the Unique Identification Authority of India (UIDAI) received statutory backing and the regulations under the Act were notified.

The UIDAI was constituted in 2009 but that was through an executive notification issued by the erstwhile Planning Commission. It received statutory backing after the Aadhaar Act, 2016 was enacted.

The bill was introduced as a money bill by the Bharatiya Janata Party, which generated outrage among the opposition parties.

Supreme Court judge Madan B Lokur had criticised the government in March 2016 for delaying the implementation of the Juvenile Justice Act 2015.

“I would imagine that before you come out with the Act, you have to have the rules in place,” Justice Lokur told The Hindu. “ Such a view would apply to any law. You have got to get everything in place.”

Of the five laws that took the longest time to be implemented, 1,249 days elapsed between the Carriage By Road Act 2007 receiving Presidential assent and the first set of rules being framed.

It was introduced in the Parliament in December 2005 but got approval from the Lok Sabha and Rajya Sabha in September and August 2007, respectively, according to PRS Legislative, a think-tank.

Only 34% laws met time limit for laying of rules

The Manual of Parliamentary Procedure in India has recommended a time limit of 15 days for framing rules, after publication of approval in the official gazette. Such rules are called subordinate legislation and may be referred to as— rules, regulations, bye-laws, orders, and notification

“Once a bill is passed, political leaders tend to move on to the next urgent issue, leaving such issues of detail to officials to work out. It is possible that the bureaucrats tasked with the writing of rules are themselves overburdened or distracted by other duties -- I don't know -- but if so, remedies must be found to increase their number and ensure that the completion of this task is accorded due priority,” said Tharoor.

Two rules (National Commission for Protection of Child Rights Rules, 2006 before the Lok Sabha and Science and Engineering Research Board Rules, 2010 before the Rajya Sabha) faced delays of 174 and 166 days, respectively.