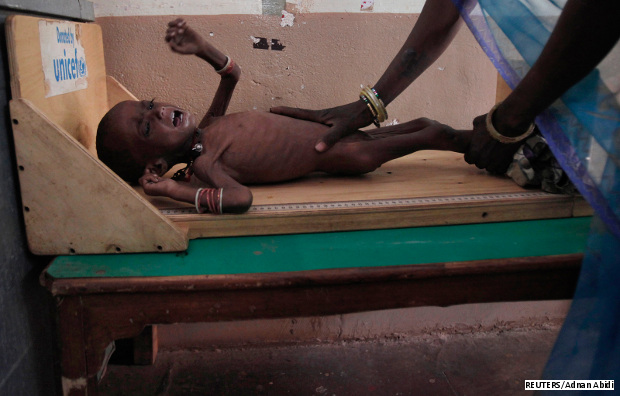 These are some of the key findings of the The Global Hunger Report 2015, released last week by the Food and Agriculture Organisation (FAO).

Undernourishment is a level of food intake insufficient to meet dietary energy requirements and is a state that lasts for at least a year, said the FAO report. For the purposes of this report, hunger was defined as being synonymous with chronic undernourishment.

This is what the report said about India:

“The evolution of hunger trends in India, in particular, has a significant influence on results for the region. Higher world food prices, observed since the late 2000s, have not been entirely transmitted into domestic prices, especially in large countries such as India. In this country, the extended food distribution programme also contributed to this positive outcome. Higher economic growth has not been fully translated into higher food consumption, let alone better diets overall, suggesting that the poor and hungry may have failed to benefit much from overall growth.”

The food basket of the poor in India is still limited to sustenance. This indicates the purchasing power of the poor, due to food inflation, still cannot improve nutrition.

The NDA government, in its first year, has kept the economy ticking and kickstarted some key reforms. But agricultural reforms are still insubstantial, at a time when unseasonal rains have created widespread rural distress.

Agriculture is important not only because 600 million people make their living off it but also because it provides India food sufficiency.

Here’s a look at key sectors and their share of GDP since independence:

The share of agriculture and allied sector was 51% of GDP in the 1950s. The focus of economic policies and reforms for development, therefore, was on other sectors, particularly state-led, rapid capital-intensive industrialisation.

The share of other sectors, especially services, increased after economic liberalisation of the 1990s. Agriculture has not seen any big-bang reforms in India, other than the Green Revolution in the 1960s and Operation Flood in the 1970s.

While industry and manufacturing are getting a boost through the Make-In-India programme, agriculture is missing technology and innovation.

Why India needs a productivity kickstart

While it may not be viable to shift all 24% of the agricultural workforce to other sectors for better income opportunities, better productivity for farmers who want to continue is important. This is also likely to be part of the nutritional puzzle.

The agricultural sector may not account for a sizeable chunk of GDP in developed or emerging economies but their productivity is far better.

These nations have managed to improve farm yields, an issue where India lags, although overall foodgrain production is 3rd highest in the world. (Foodgrains include cereals and pulses)

As an illustration of the production-productivity conundrum, consider cereals, of which India is the third-highest producer in the world.

Source: FAO, World Bank; Note: There is a difference in GDP figures for India between the World Bank and NITI Aayog due to differences in methodology.

This is what Ashok Gulati, chair professor for agriculture at the Indian Council for Research on International Economic Relations, wrote in a recent Indian Express column:

“…it is important for Indian policymakers to know that China started its economic reforms with agriculture, not industry. During 1978-84, the period which marks the beginning of China’s economic reforms, the country abandoned the commune system and graduated to the household responsibility system in land. This is well known. What is not known widely is that China also liberated controls on agriculture pricing to a large extent. As a result, its agriculture grew by 7.1 per cent per annum, while farm incomes increased by 14 per cent per annually, and rural poverty halved in the six years between ’78 and ’84”. ¦

Also read this IndiaSpend story on how malnutrition continues to plague urban India.