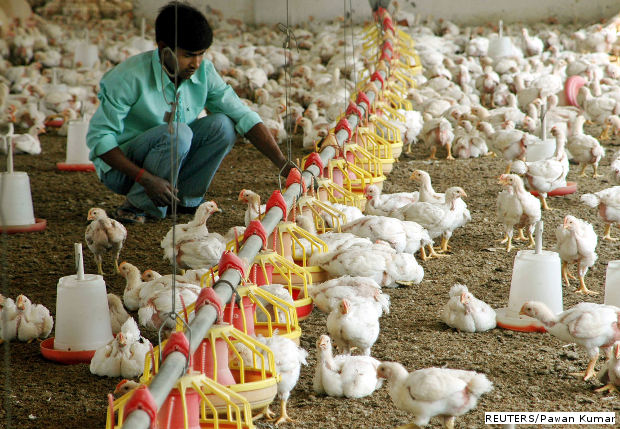 Outside the northern city limits of Bangalore, in a commercial poultry farm, cages packed with screeching chicken, sit on metal stilts. In a corner of the farm, men pack jute bags with bird feed. One of the workers--who would only say his name is Kumar--reveals the chicken feed is made in-house, and "medicines" are mixed with the feed.

These "medicines" are usually antibiotics, which play a key role in fulfilling India's growing appetite for animal protein. That protein comes mainly from chicken--although goat, bovine and fish are also contributors--largely raised by intensive poultry farming, which uses antibiotics widely not just to ward off the threat of epidemics at such close quarters, but as growth factors.

India was among the top five countries using antibiotics in animal-food production, with 3% of the global share in 2010, according to a new research paper in the scientific journal Proceedings of the National Academy of Sciences (PNAS) last week.

Over the next 15 years, the PNAS paper predicts, India's antibiotics consumption will double. Across Asia, already high antibiotic use will rise 4% in pigs and 143% in chicken, the extreme rise in poultry coming from India's unprecedented appetite for chicken.

Giving chicken antibiotic-laced pre-mixed feed forces them to ingest low concentrations of antibiotics "for every day of their lives", Dr. Ramanan Lakshminarayan, Director of Princeton University's Center for Disease Dynamics, Economics & Policy, and one of the authors of the paper told IndiaSpend in an email interview.

“This has profound impacts on the effectiveness of antibiotics in medicine, including effects that we may not fully understand,” said Lakshminarayan.

India will be most affected by skyrocketing antibiotic use in animal feed, said the PNAS study.

“Widespread resistance may be more consequential for India than for other countries because India’s bacterial disease burden is among the highest in the world, and therefore antimicrobials play a critical role in limiting morbidity and mortality,” the paper said.

The growing footprint of antibiotics in animal feed

This illegal application of antibiotics contributes to their general and rampant overuse in India, which faces the prospect of losing the last defence against a host of infections and two million deaths a year, as IndiaSpend previously reported.

That is why the Bureau of Indian Standards (BIS) does not recommend use of antibiotics as growth promoters. Feed manufacturers include them anyway in the premix feed sold to poultry farmers, noted a 2014 fact sheet from the Centre for Science and Environment (CSE), New Delhi.

The same companies also manufacture feed with herbal supplements; these are not used as substitutes but to complement antibiotic-laced feed. This is what the CSE found:

A growth promoter. In broilers it provides uniformity in growth

V-Fur 200 is an ideal growth promoter for adult birds

Helps to increase the growth, body weight with economical FCR in broilers

Improves weight gain and F.C.R in broilers, Helps in improving growth and performance

“Antibiotics are used only as therapeutics in the poultry sector, if at all, as a preventive measure," Dr. Mahesh P.S., director of the central government’s Central Poultry Development Organisation &Training Institute told IndiaSpend.

"Farmers have to follow the minimum withdrawal period recommended by the Government, which means the bird cannot go to the market for a certain period of time after the administration," said Mahesh. "So, if at all antibiotic residues are found, they will be well within the MRL (maximum residue limits) set by the international body, Codex Alimentarius.”

There are no laws specifically governing the use of antibiotics in cattle, chicken, and pigs reared for domestic consumption in India.

In June 2014, an agriculture ministry circular requested states to advise veterinarians on how to use antibiotics carefully. It also said that the use of antibiotics in feed should be stopped, without explaining how.

So far, only the European Union and South Korea have banned the use of antibiotics in animal feed.

Mahesh did not see the lack of regulations as a problem.

“All big poultry farms perform quality control tests," he said. "India being one of the biggest exporters of poultry, our management practices are of international standards.”

The World Health Organisation and Global Antibiotic Resistance Partnership have called for national surveillance to limit antimicrobial consumption in both humans and livestock in India.

Unchecked, Indian antibiotic consumption will double by 2030, according to the PNAS paper.

Antibiotic residues in animal-food products, such as chicken meat and milk, have been found across India by public health scientists, as a 2013 paper from the Public Health Foundation of India reported.

The southern coast of India and the cities of Mumbai and Delhi are among Asian hotspots for antibiotic consumption, according to the PNAS paper, along with Guangdong and Sichuan provinces in China, the Red river delta in Vietnam and Bangkok in Thailand. 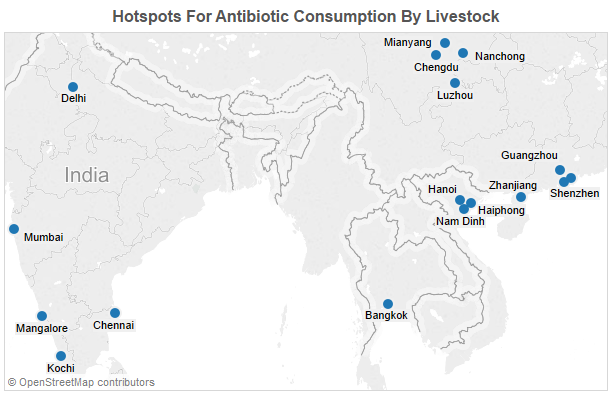 Source: Proceedings of the National Academy of Sciences

This is how the food chain works: Antibiotic infused in feed ? animal eats feed ? human eats animal ? ingests antibiotic ? microbes adapt to regular diet of antibiotics ? resist antibiotics when used against them.

Over the years, several studies have found multi-drug resistant bacteria, such as Salmonella and E.coli, in poultry and seafood in India. These super bacteria in food are easily transmitted to humans through contaminated food and through direct contact with infected livestock.

The health consequences of antibiotics in animals include often severe, sometimes fatal, human infections. Other outcomes are water and soil pollution, loss of biodiversity, and a decline in the nutritional value of meat.

The indiscriminate use of antibiotics in human medicine in India has given rise to several drug-resistant bacteria known as ‘super-bugs’, which are hard to treat.

India was the largest consumer of antibiotics in 2010, ahead of China and the US, according to a Lancet study of antibiotic sales in 71 countries published in August 2014.

Inappropriate use, non-compliance, self-medication and over-the-counter availability are some factors contributing to Indian antibiotic resistance, a major concern for diseases like HIV-AIDS.

India also faces a tuberculosis (TB) crisis, with the second-largest number of multi-drug resistant TB (MDR-TB) cases in the world.

Recent research estimates that up to 95% of Indian adults carry bacteria are resistant to ß-lactam antimicrobials, a broad range of antibiotics that includes penicillin and carbapenems, considered antibiotics of last resort.