Keep The Government Out Of Service Businesses, At Least 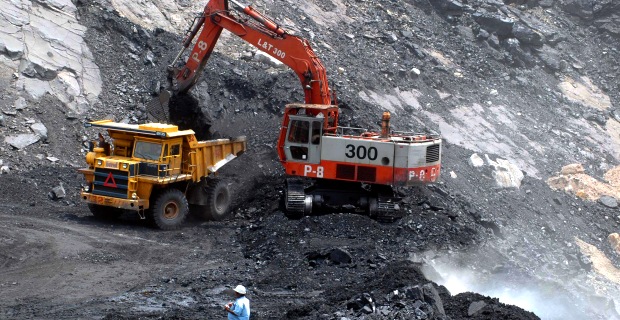 The demise of Margaret Thatcher is a good time to revisit the idea of state-ownership of businesses. Thatcher was adamant and pushed privatisation aggressively. Her approach came in for much criticism but the eventual outcome is not something everyone disagrees with.

India, on the other hand, has had a checkered history when it comes to disinvesting or privatisation of state-owned enterprises. After a few bursts, now nearly a decade ago, the effort ground to a halt. A bakery, some hotel properties and a telecom company , among others, were the only entities to be fully privatised. Today, two decades after economic liberalisation, even loss-making, non-monopoly businesses like airlines and telecom continue to be run by the Government, at considerable burden to the taxpayer & strain on Government time, which could be put to better use elsewhere.

Let’s dive into some numbers now. And start with cash. India’s 17 leading state-owned enterprises including the world’s largest coal producer, Coal India, Oil & Natural Gas Corporation (ONGC) and National Thermal Power Corporation (NTPC) had a cash and bank balance of Rs 162,338 crore during the last financial year, according to a written reply in the LokSabha recently by the Minister of State for Finance

But data from the Public Enterprise Survey for the past four financial years (FY08 to FY12) reveals that the total profits of PSUs have grown only at a compounded annual growth rate (CAGR) of 4.7%, led mainly by profits in the mining (17.1% CAGR) and electricity (9.8%) industries. While growth in profits in the manufacturing sector stagnated, the services sector has moved from profits to losses. 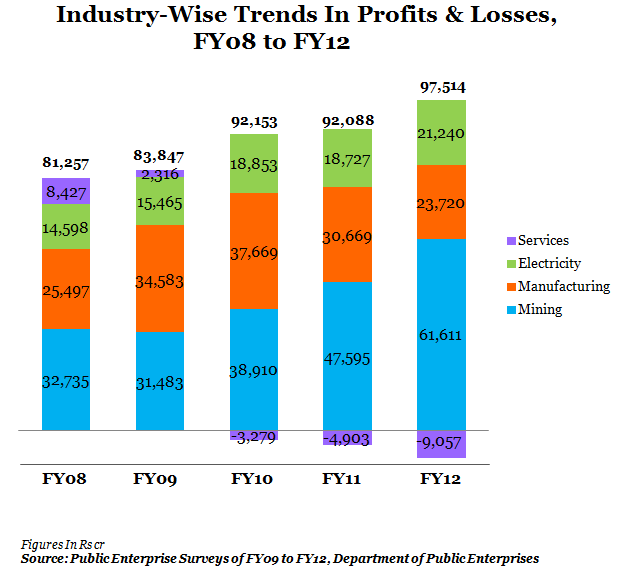 When ranked by absolute profits, the top 10 PSUs in India are largely those in energy and resources sectors while those in aviation and telecom lag with their high losses. To put it in perspective, ONGC and Coal India (consolidated) accounted for 42% of total PSU profits in FY12. Within loss-making PSUs, the top 3 are BSNL, MTNL and Air India. 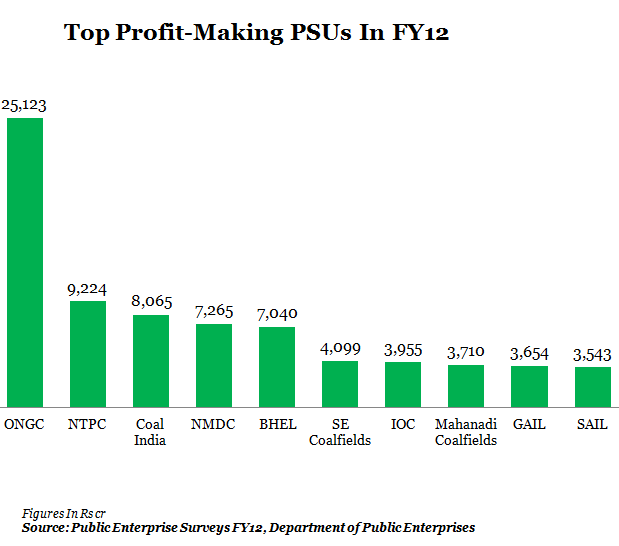 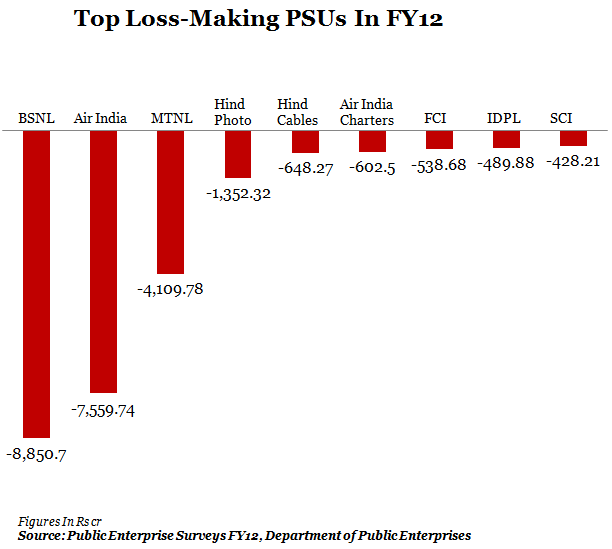 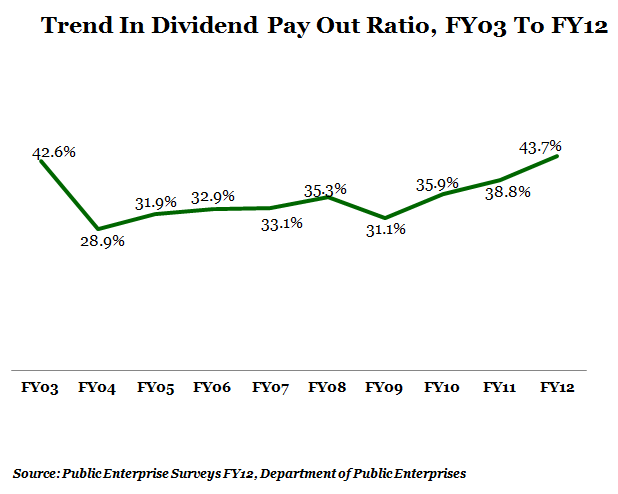 While the profitability of public sector units has been a major issue in recent times, the disinvestment of Government holding in these PSUs has been seen as a possible solution to raise resources. PSUs also play a major role in generating income for the Government via taxes and duties as well as dividends. For FY14, the Government has a disinvestment target of Rs40,000 crore, half of which could be met potentially by a sale of 10% of Government’s stake in Coal India.

While disinvestment will help the Government raise the much-required funding to ease the tight fiscal situation in India, it will also result in lowering Government ownership of profitable assetsin key sectors like energy. However, even after stake sale, the Government should remain the largest shareholder in these companies(for e.g.: Government’s stake in Coal India is currently 90%).

The key issue remains loss-making PSUs, and the strategy to turn around these companies that employ a large number of people and operate in highly competitive and liberalised sectors such as aviation (Air India) and telecom (MTNL, BSNL). For the telecom companies, the Planning Commission notes: “Urgent steps are required to be taken to turn them around by leveraging upon their strengths and assets as well as financial reengineering.”

A sustained focus by the Government on correcting the course for these loss-making PSUs remains critical for their return to profitability. And this appears difficult in the near-term given the Government’s lack of financial resources in the current fiscal situation…

Mahanagar Telephone Nigam Limited (MTNL) is the incumbent telecom services provider in Mumbai and New Delhi. Over the past 10 years, MTNL’s sales and profits have seen a declining trend. MTNL failed to keep up with the switch from fixed line telephony to mobile telephony. As private operators ramped up their user base in the two largest metros in India, MTNL was left behind with the Government failing to add capacity to their mobile network. 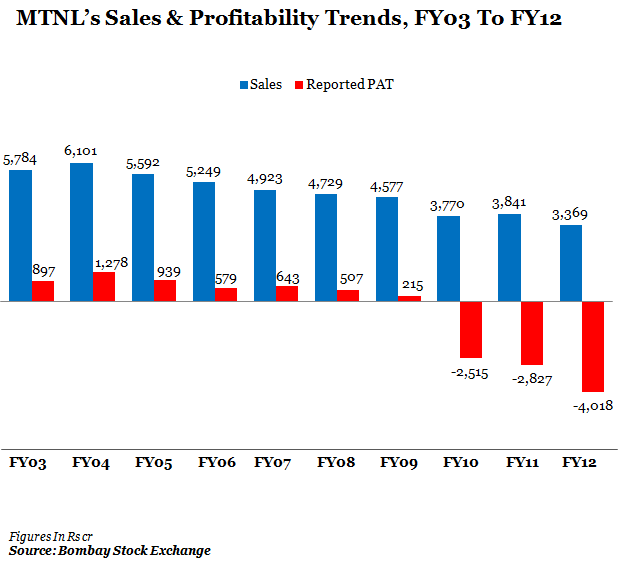 In recent years, MTNL also had to bear the burden of acquiring 3G and BWA spectrum. With core profitability on the decline, MTNL is now looking at selling off excess land. Its FY12 Directors Report states:

“MTNL has huge assets in the form of land & building, and, of late, has been making efforts for renting out the spare space and has also been successful to some extent. With the advancement of technology, the space occupied by the equipment is shrinking day by day and more and more space is getting available. In its constant effort for generation of additional revenues, MTNL has rented out the spare space available in different offices / exchange buildings across Delhi and Mumbai. In addition, MTNL has considerable assets in the form of spare capacity available in installed equipment. MTNL intends to rent out this available spare capacity and generate additional revenue…”

MTNL’s declining profitability reflects the Government’s inability to capitalize on an opportunity of huge growth in the past decade. With the telecom industry now facing the pressures of growth reaching maturity levels, it would be a challenge for MTNL to return to its old days of profitability which was – as time has shown – a function of the monopoly it once enjoyed.