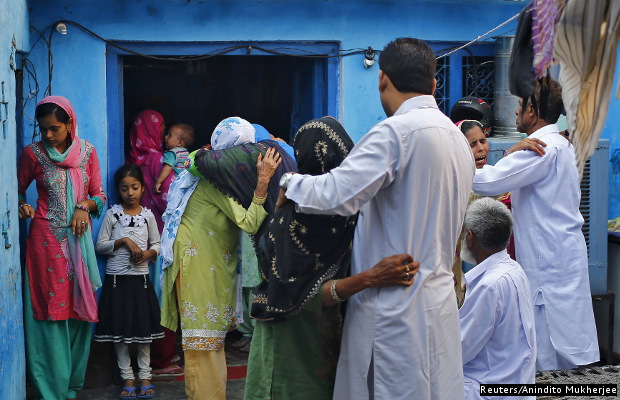 Family members of Mohammad Akhlaq, who was killed by a Hindu mob, mourn his death at Bisara village in Uttar Pradesh, India, October 2, 2015. He was killed because of rumours that he slaughtered a cow.

Uttar Pradesh accounted for a fifth of all religious conflicts--or "communal incidents", as they are officially called--in India between 2010 and 2014, according to data tabled in the Lok Sabha.

As many as 703 religious conflicts were reported in Uttar Pradesh (UP) during the past five years, leading to 176 deaths and 2007 injuries, the highest in India. The first six months of 2015 saw 68 such incidents in UP, India's most populous state, home to about 200 million people.

With regards to population, Karnataka has most religious conflict

Karnataka registered around 17 injuries from communal violence per million population between 2010 and 2014, followed by Gujarat at 16. UP is ranked sixth with 10 injuries.

Madhya Pradesh saw the highest number of deaths from communal violence per million population at 0.9 during this period, followed by UP at 0.8.

In sheer numbers, UP leads the pack

The latest incident to hit national headlines was the murder of Mohammad Akhlaq, a 50-year-old iron smith in Bishara village, in western UP's Dadri district. Akhlaq was lynched by a mob on September 28, 2015, on suspicion of eating beef and storing it in his refrigerator. His son Danish, aged 22, was brutally beaten up and is currently hospitalised.

A series of violent incidents were reported before Akhlaq's death, including the fatal beating of a Muslim man suspected of being a "Pakistani terrorist"--although there was no confirmation of this--and the burning alive of a 90-year-old Dalit man visiting a temple.

The year 2013 saw the highest number of communal incidents in UP, 247, including the religious riots in Muzaffarnagar that left 59 dead and more than 50,000 homeless.

Maharashtra followed U.P. with the second-highest religious conflicts between 2010 and 2014 at 484. The state also ranked second in deaths and injuries from communal violence at 70 and 1,462, respectively.

Bihar, ranked sixth in communal violence with 61 incidents last year, has climbed to the third position this year with 41 incidents and 169 injuries, according to provisional data from January to June.

With 14 deaths this year, Bihar has overtaken UP (which witnessed 10 deaths till June) with the highest number of deaths from communal violence in India.

India has witnessed over 3,400 communal incidents over the last five years; 529 people died and 10,344 were injured.

Update: This copy has been updated to reflect religious conflicts per million population. The headline has also been changed to reflect the updates in the story.