Juvenile Crimes Rise 47%. But Adult Law May Not Help 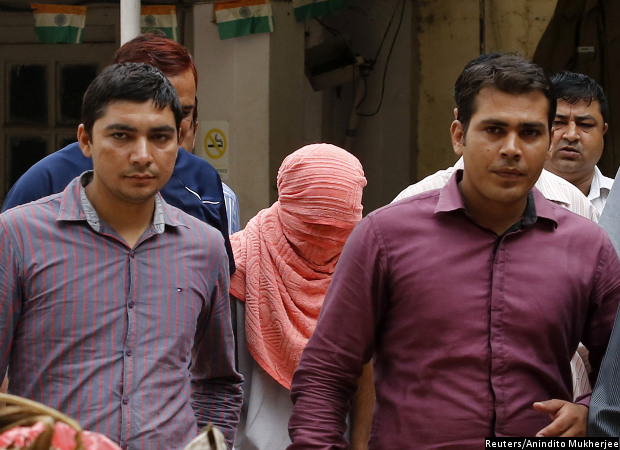 Plainclothes policemen escort the juvenile convict (head covered with towel) after he was sentenced to three years in juvenile detention on August 31, 2013 for the Nirbhaya gang rape.

As the Delhi High Court decides whether or not the juvenile convict in the Nirbhaya case — the 16 December, 2012, Delhi gang-rape of a 23-year-old physiotherapy student who died later — should be released this week, a nationwide debate over treating juveniles as adults intensifies as crimes by teenagers will intensify.

These data may appear to support the contention of Nirbhaya’s parents that the juvenile rapist of their daughter should not be released--Maneka Gandhi, minister of women and child development, indicated she agreed and that the government would incarcerate him again, if it could--but according to the law he must be released after three years of imprisonment. That could happen on Sunday, unless the Delhi High Court decides otherwise.

Yesterday, the central government sought an extension of the juvenile's stay at an observation-home to sort out post-release details.

But the data on juvenile crimes raise five questions, the answers to which indicate that things are not as evident as they seem.

“The point that needs to be kept in mind is that data on crime in India is based on first information reports (FIRs) filed by the police and not actual conviction,” said Swagata Raha, senior research assistant, Centre for Child and the Law (CCL), National Law School of India, Bangalore.

Although juvenile crime increased 47%, crimes committed by juveniles as a percentage of total crimes reported has ranged between 1% and 1.2% over the last five years.

2) Should 16-18 year juveniles be tried under adult laws? Or should the age of trial be lowered?

The idea of lowering the juvenile age has been fiercely debated since the Nirbhaya case.

In October 2015, a two-and-half year old girl in Delhi was raped by two boys, aged 16 and 17, which led Chief Minister Arvind Kejriwal to propose that the age of trial in rapes should be lowered to 15 from 18.

Legal and child rights experts contend that this is not a good idea.

“When the Indian government made 18 the age to enter the adult criminal justice system, it was the right one," said Karuna Nundy, Supreme Court lawyer. "The Child Rights Convention recommends that, too, and with good reason. The move to reduce the age to 16 for heinous crimes is wrong."

There are three points to consider, Nundy said:

Her views were corroborated by Raha.

“We are firmly of the view that all persons below the age of 18 years should be dealt with under the juvenile justice system," said Raha. "This is because of their diminished culpability and amenability to reform. To treat them as adults would violate the constitutional right to equality as well as our obligations under the UN Convention on the Rights of the Child.”

In 2013, Bharatiya Janata Party (BJP) leader Subramanian Swamy had petitioned the Supreme Court to reconsider the definition of “juvenile”. He requested the SC to consider the "mental and intellectual maturity" instead of the age limit of 18 years.

His petition was dismissed by the apex court, which held that the provisions of the Act are in compliance with constitutional directives and international conventions.

3) Should the Juvenile Justice Bill 2014 be implemented?

The Juvenile Justice (Care and Protection of Children) Bill 2014 was introduced in the Parliament in August 2014 by Maneka Gandhi. It was passed by the Lok Sabha in May 2015 but is pending in the Rajya Sabha.

The Bill proposes some radical changes, the most critical providing for juveniles between 16 and 18 being tried as adults for heinous offences.

The CCL believes that this provision violates the constitutional guarantee of equality, the right to life and the UN Convention on the Rights of the Child.

Moreover, the proposed change is based on a flawed interpretation of data on heinous crimes.

Among the 16-18 year age group, 844 murder cases were registered (1.2% of overall murder cases) and 1,488 (3.08% of overall rapes) rapes. Experts argue this cannot be the basis for drastic changes to juvenile laws.

“While reading the figures on rape, it must also be borne in mind that the Protection of Children from Sexual Offences Act, 2012 raised the age of consent from 16 years to 18 years," Raha said. "This has meant all forms of consensual sexual activity among adolescents are also an offence. We find that several cases of rape have been filed against boys by their girlfriends’ families.”

Changes in rape laws, besides increased reporting due to awareness, have led to a 151% increase in the number of cases reported in five years, IndiaSpend reported earlier.

Many clauses of the proposed Juvenile Justice Bill, 2014, are "problematic" and violate constitutional and international conventions, said Raha.

Clause 15 (1): In case of a heinous offence alleged to have been committed by a child who has completed or is above the age of 16 years, the board shall conduct a preliminary assessment with regard to his mental and physical capacity to commit such offence, ability to understand the consequences of the offence and the circumstances in which he committed the offence.

The "arbitrary and irrational", as experts describe it, procedure provided under the bill contravenes the fundamental guarantees under Article 14 and 21 of the Constitution, according to CCL.

Even medical experts contend the proposed assessment is flawed.

“Identifying the frame of mind of an adolescent who is only alleged to have committed a heinous crime will merely result in an arbitrary “opinion” lacking scientific validity,” Shekar P Seshadri and Raghu N Mani, Professors, Department of child and adolescent psychiatry, NIMHANS, Bengaluru wrote in a column in Hindustan Times.

They argued that the proposed assessment of a child’s mindset at the time of alleged crime cannot be done scientifically; it could lead to arbitrary opinions and fuel judicial decisions that could radically alter the course of a child’s life.

4) Will the new Bill affect juveniles from the most disadvantaged backgrounds?

Yes. As many as 56% of juveniles accused of crimes come from families with a maximum annual income of Rs 25,000, while 53% of juveniles are either illiterate or educated till primary school.

5) Should cases that evoke public emotions be treated separately?

The Nirbhaya case evoked a lot of emotions aided by the brave face put up by Nirbhaya’s parents, especially the presumption that the juvenile convict was the most brutal, which the Juvenile Justice Board later said was not based on evidence.

Being emotional is a part of the problem, said Nundy. “We have to bear in mind that the steps we take emotionally should benefit the society at large, not just to satisfy the conscience of angry citizens,” she said.

"We cannot begin to understand the anguish that the parents of Nirbhaya continue to feel, and earnestly hope that they are supported to attain closure on this horrific incident. However, what brings closure and peace to one family may not be the same as others," said Arlene Manoharan, Programme Head, Juvenile Justice Team, CCL. "Research from other jurisdictions demonstrate that closure and healing of deep-seated anger, disillusionment, and pain may be more effectively achieved through therapeutic interventions, including restorative-justice approaches that have worked effectively even for serious sex offenders.”