Jobs For Women: Why India Does Worse Than Somalia 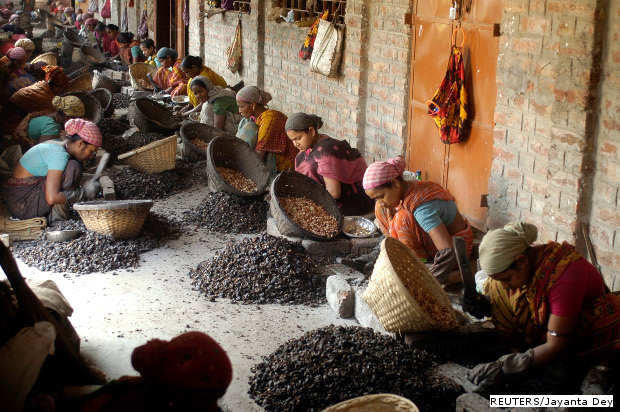 As Women's Day rolls in and various debates around the Indian woman unfold--such as her role, education, freedom, responsibilities and job prospects--one thing is clear: the percentage of women in India's workforce is declining.

Women’s workforce participation in India is the lowest among the BRICS nations. A range of countries, such as Bahrain, Malaysia and even Somalia (37%) do much better.

Economists and sociologists cite many reasons for the low and--as we shall see--falling rate of women in the workforce including: dropping out for further education, raising children and family pressure.

Most of those who remain, have no choice, as economist Vinoj Abraham has concluded in two studies.

"Those who do enter and remain in the labour market are women from the most vulnerable households, as marginalised informal paid labour, thus feminising the most precarious forms of labour in the country," writes Abraham in Economic and Political Weekly.

Data bear out his thesis.

Over these 11 years, the percentage of women in the urban workforce stayed the same: 20%, although actual numbers rose from 19 million to 29 million.

The majority of female workers in rural areas (80%) work in the agriculture sector. Manufacturing is a distant second at 7.5%, followed by construction (5.2%) and services (7%).

The biggest employer of urban women, at 39%, is the "other services" sector, which includes domestic work, followed by manufacturing with 27%.

Female workers in India largely comprise unorganised labour, and a vast majority in the unorganised informal sector include those engaged in agriculture, as low-paid subsistence workers, a market susceptible to economic shocks.

The decline in female employment in the second half of the decade is a reflection of their declining numbers in agriculture, the unorganised sector and those who are self-employed.

In urban India, women are a minority in most industries, even in the service sector, where they tend to be in more visible roles.

Core engineering and automobile sectors have the least representation of female workers, employing 16% and 18% respectively.

The highest number of women are in pharmaceuticals and healthcare: 42.4%. This situation spotlights the fact that most women working in urban areas are not skilled.

The poorest, the desperate and the stereotypical

A third of urban women workers are illiterate, as compared to 11 % of men.

Gender-based disparities exist in technical and vocational education and training, with girls accounting for just 7% of enrolment at the secondary level, concentrated in some stereotypical courses such as nursing and sewing.

In urban areas, 2.9% of women are technically educated, as compared to 7% of men. 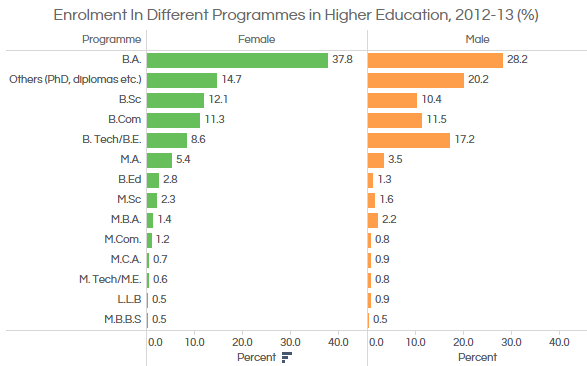 In post-graduate courses, 14.7% are enrolled in other courses (PhD, MPhil, diplomas and certificate courses).

In an earlier IndiaSpend analysis, we found that women were dropping out of higher education programmes in several states, even in richer states, such as Kerala and Gujarat.

Reproductive roles, household and care responsibilities, cultural sanctions and patriarchal hierarchies play a major role. Continuing education and migration after marriage are also reasons for the withdrawal of women from the labour force.

"The sharp decline in female employment has raised concerns among policy makers regarding gender equality, women empowerment, and women livelihood strategies," said the IAMR study. "Women’s employment is a critical factor in their economic empowerment and their overall status in society."

(Prachi Salve and Saumya Tewari are policy analysts with IndiaSpend)