(Jammu) Jammu and Kashmir: The governor of Jammu and Kashmir (J&K) declared the state open defecation free (ODF) on September 15, 2018. This ODF status has not been validated by the central government’s Swachh Bharat Abhiyan (Clean India Mission), but even if it is, Jammu has a bigger problem.

The state’s winter capital generates over 22,000 tanker loads (157 million litres daily or mld) of untreated sewage (94% of the 167 mld sewage produced by the city), which flows into open drains and contaminates the city’s water bodies and sources of drinking water, threatening its population of over 550,000 and its large floating population of over 110,000 with water-borne diseases, based on information from project documents and government officials.

Jammu’s sewage problem represents urban India’s sewage problems--63% of India’s sewage is not treated contaminating rivers, seas and lakes, and polluting 351 stretches of India’s rivers, according to the latest available Central Pollution Control Board (CPCB) data, as FactChecker reported in October 2018. India has the capacity to treat only 37% of the sewage generated in urban areas.

India’s class-I cities (with a population over 100,000) and class-II towns (with a population between 50,000 and 100,000) together generate an estimated 33,212 mld of sewage, equivalent to 5.4 million tanker-loads (a tanker carries 7,000 litres)--if lined up, they would circle the equator 1.3 times. But these cities have the capacity to process only 24% of the sewage, according to the CPCB website.

About 167 mld of sewage flows out of Jammu, and the city has an installed capacity to treat 67 mld sewage (40%) in three sewage treatment plants (STPs). But only 10 mld sewage, i.e. about 15% of the STP installed capacity, and 6% of the sewage produced, is treated, according to Rakesh Gupta, executive engineer (sewerage) with the Economic Reconstruction Agency (ERA), set up to implement the Jammu and Kashmir Urban Sector Development Investment Program.

“During the monsoon, we have to wade through a mix of untreated sewage and solid waste. Water-borne diseases are also common,” said S Handoo, a 42-year-old resident of Paloura area in Jammu.

By the end of 2018, several ongoing sewerage projects will be completed, which will increase the city’s capacity to treat sewage to 15-20 mld, more than the current 10 mld but still lower than the city’s total sewage production, according to Gupta.

The situation in Jammu reflects the problem in the entire state. Urban areas of J&K generate 547 mld sewage, but can theoretically treat 48%, as per March 2017 data. The actual amount of sewage getting treated daily may be much lower, as is the case in Jammu, which has been selected as a Smart City under the central government’s Smart City Mission which aims to transform “Jammu into a sustainable and economically vibrant city focusing on tourism, quality of life and trade by leveraging its heritage and location”. 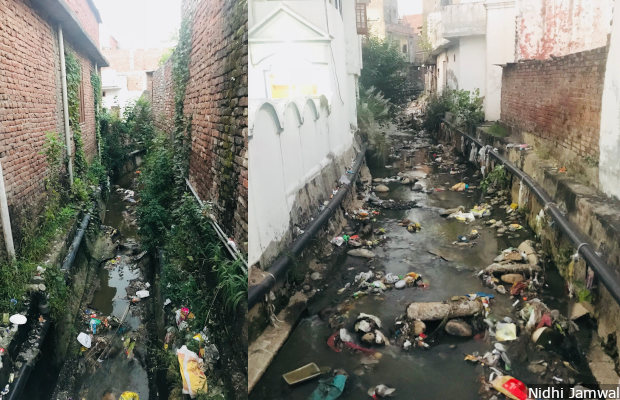 Through various sewerage projects, agencies are providing free household sewerage connections to households and trying to divert sewage away from open drains in Jammu

The city of Jammu, the capital of J&K from November to April, is located on the banks of Tawi River, a major tributary of the river Chenab. The city’s older parts are spread on the right bank of the Tawi, and newer parts on the left.

The first master plan of the city was approved four decades ago, in 1978, for a plan period of 20 years from 1974 to 1994, but, even though sewage was part of the document, the city expanded without any provision for sewage collection and treatment. After seven years of a planning vacuum, when the city “was essentially let loose to the vicious urban forces”, according to the Jammu Master Plan-2032, the second master plan from 2001-2021 was approved only in 2004.

Even after these plans, only 3% of the city’s population was connected to a sewerage system in 2011, according to the master plan.

In February 2017, the state cabinet, headed by the then chief minister Mehbooba Mufti, approved the Jammu Master Plan-2032.

“The city does not have a planned and a full-fledged sewerage system. Presently conservancy system of using bucket latrines which necessitates carriage of night soil from latrines by sweepers to cart trucks and then to the disposal site is practiced in few parts of the city. In most parts of the old city, night soil is flushed into roadside drains and natural water channels, causing fly nuisance and unhygienic conditions,” according to the master plan.

“The sullage waters in these areas are directly disposed into River Tawi or other water bodies without any treatment…Septic tanks are being used by the middle and higher income groups but safe disposal of the effluent is still lacking.”

Further, “12% of the city population is without any sanitation and therefore resorting to open defecation”, the plan document said. Jammu’s self-declared ODF status was factually incorrect, a state government official said, on the condition of anonymity.

“In spite of master plans, no comprehensive planning has been done for the balanced development of the city. Till 2003-04, there was no sewerage in the city at all,” said the official. Some sewage projects were floated after 2004, which are currently being built, but the condition is still pitiable as the projects cover only a small portion of the city and will impact 20-25% of the city’s area, he added. 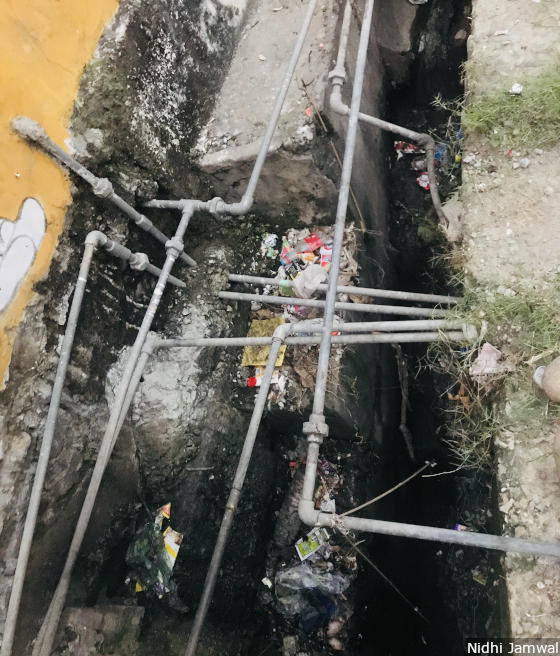 Drinking water pipelines run along open drains which carry untreated sewage in Jammu. Residents complain this is a major reason for water-borne diseases.

Currently two STPs in Jammu city, as we’ve described above, with capacities of 27 mld and 10 mld each, are nothing but white elephants. Several other sewage projects have also been unsuccessful.

In 2014-15, a sewerage project worth Rs 1,498 crore, proposed to be funded by the Japanese International Cooperation Agency (JICA), was forwarded to the Central government. A pre-feasibility report was prepared, which covered the entire city through sewer network and STPs. “But, the state administration was not serious and didn’t pursue the project properly. The status of this project remains unknown,” the official, who wished to remain anonymous said.

Meanwhile, there are several other ongoing sewage projects in the city.

For sewerage, Jammu is divided into three divisions--A, B and C, according to the Jammu Municipal Corporation. At present, sewage works are in progress in division A, on the right bank of Tawi, and cover parts of the old city. Under these sewerage projects, free household sewerage connections from kitchens, bathrooms and toilets are being provided.

Three agencies together are responsible for the projects in division A: The ERA, the Urban Environmental Engineering Department (UEED), and the National Buildings Construction Corporation Limited (NBCC), which works under the UEED.

When work began to lay the sewer lines, the agency realised that some sewage pipe networks were omitted in the main project. In order to cover the missing links, another detailed project report was made and sanctioned by the Indian government in 2012. This included laying of an additional 1.05 km trunk sewer line and 36.2 km of lateral sewer line at an additional cost of Rs 20.32 crore.

In several parts of the old city, such as Jewel Chowk, Raghunath Bazar, Karan Nagar, Amphala, etc, main trunk sewer lines were laid, but household connections were not provided. If provided, household sewage from these areas could have been transported to the 27 mld STP, which is currently lying idle. State officials claimed that funds were not provided at the right time to carry out the sewerage project in totality. 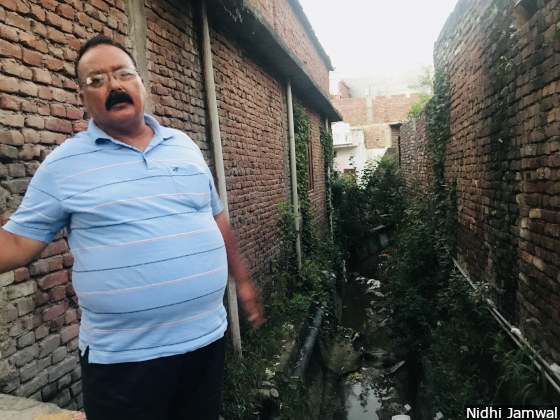 According to Rakesh Sharma, a city-based advocate, in several localities of Jammu where sewerage works have been carried out, either the main trunk sewer is missing, or household connections have not been provided.

“The (27mld) STP has already been constructed at Bhagwati Nagar and inaugurated about four years ago. But, since then it is lying idle and non-functional because pipelines to carry household sewage to the STP are not fully laid,” according to the government official. This was in spite of removing slum areas of Krishna Nagar from the project, where there was a lack of space to install sewer pipes, he said.

Similar complaints are pouring in from other areas as well. Sewerage works have been sublet to contractors but there is no accountability, according to Rajesh Sharma, a city-based advocate. In some areas, household connections have been provided, but main trunk sewer line is missing.

Under the UEED project, the UP Jal Nigam executed the sewerage scheme of Talab Tillo area. The project, with a total project cost of Rs 34.77 crore, consisted of 1.63 km of trunk sewer, 31.812 km of laterals and 5,704 house connections. It had a 10 mld STP, which was constructed in mid 2000, but the STP is now non-functional.

Now, the UEED is executing another project worth Rs 8.17 crore to provide sewerage to some new settlements in Talab Tillo, which were not part of the earlier project.

The ERA, the third agency, is executing sewage projects worth Rs 188 crore in Janipur, Bhawani Nagar, Bakshi Nagar, Shakti Nagar and Paloura. The first package of the project--officially known as WW05--is 98% complete, and 17 nullahs have been tapped and sewage flowing into them has been diverted to the main sewage trunk line, informed Gupta of the ERA.

“There are 35 nullahs in Jammu city, of which about 15-16 directly dump untreated sewage into the Tawi river. The rest throw sewage in other water bodies and low-lying areas. All these nullahs must be tapped and untreated sewage diverted away from the river to the STPs,” he added.

The second part of the ERA’s project--WW03A--aims to provide 10,300 households with a sewerage connection, of which 7,200 have been provided a connection. The third package--WW07--also to provide household connections is “almost nearing completion”. All these projects of the ERA will be transferred to UEED by December 2018, as the UEED is responsible for the operation and maintenance of sewerage.

“Apart from laying sewer lines and providing household sewage connections, we have also built a 30 mld STP, which is functional and treats 10 mld sewage. By this year end, it should be able to receive a total of 15-20 mld sewage and treat the same,” said Gupta.

But, even after ERA and NBCC projects are complete, barely 25% of Jammu city’s area would be connected to sewerage.

(Nidhi Jamwal is an independent journalist based in Mumbai. Support for this story was provided through a fellowship under the DFID-funded Informing Change in the Indus Basin Project, led by the International Water Management Institute (IWMI). The views expressed are solely those of the author and in no way reflect those of IWMI or DFID.)