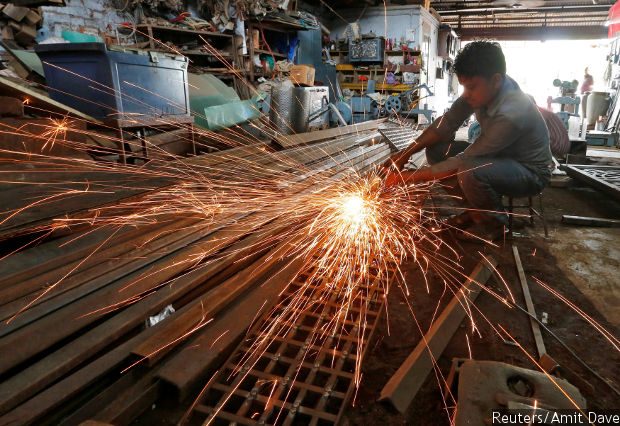 A worker grinds a metal gate inside a furniture factory in Ahmedabad. Finance Minister Arun Jaitley’s challenges, as he presents his fourth budget, centre on the agriculture sector struggling to emerge from a two-year drought; a seven-year decline in sales of manufacturing companies and a slowdown in the construction and textile sectors after demonetisation.

Finance Minister Arun Jaitley is likely to offer additional tax breaks to the salaried class, increase government spending to boost flagging demand and prepare the ground for the launch of basic universal income for some proportion of Indians who live below the poverty line--172 million at last count--while presenting his fourth budget on February 1, 2017.

Jaitley’s challenges centre on the agriculture sector, on which 58% rural households depend, still recovering from a two-year drought--vast swathes of the south, as we reported, are now enduring the worst northeast monsoon in 140 years; a seven-year decline in sales of manufacturing companies; and a slowdown in, among others, the construction and textile sectors--the biggest employers after agriculture, 69 million combined--after the government scrapped 86% of India’s bank notes, by value, on November 8, 2016. Put together, these economic indicators jeopardise attempts to provide employment to young Indians--the failure to meet aspirations has set in motion a series of protests and agitations by various caste groups nationwide.

The budget is also likely to set the stage to end a 150-year colonial-era tradition of following the April-March financial year and switch to January-December, in line with the country’s monsoons and harvest, IndiaSpend reported in December 2016. Jaitley is also likely to break tradition and move away from plan and non-plan budget allocations--a method of accounting that considered five-year plans, which began in 1952 and ended in 2014--to budgeting by annual capital and revenue expenditure.

The government rides on falling oil prices, but the economy is struggling

The National Democratic Alliance government, headed by Prime Minister Narendra Modi, has benefitted from declining global crude oil prices since 2013-14, saving the government over Rs 2.7 lakh crore ($39 billion) in 2015-16, IndiaSpend reported in February 2016. The savings have not been passed on to consumers, who have paid greater taxes on petroleum products; excise duties on petrol and diesel now account for over 50% of excise revenue, T N Ninan wrote in Business Standard on January 20, 2017.

While the Modi government has accepted the recommendations of the 14th Finance Commission to increase the share of states in central taxes to 42% from 32%, money given to states could actually be between 26% and 39% lower, IndiaSpend reported on March 4, 2015.

Jaitley increased allocations to agriculture by 84% in 2016, but after adjusting for costs, an Indian farmer’s income effectively rose 5% per year over a decade (2003-2013), IndiaSpend reported in March 2016, calling into question Jaitley’s declaration of doubling farmers’ income over the next five years.

Rabi crops have been sown on nearly 63 million hectares, 6% more than last year (2014 and 2015 were drought years) and around 34% more than the average of the last five years, Business Standard reported on January 20, 2017.

The worry, however, is that the retreating northeast monsoon--usually unnoticed in India owing to the singular importance of the larger southwest monsoon--in 2016 was the worst ever over the last 140 years, according to Indian Meteorological Department records, IndiaSpend reported on January 10, 2017.

While the Tamil Nadu government has already drought in the state, south India’s combined reservoir levels are now at 30% of capacity, according to data from the ministry of water resources.

The industry scene is also worrying for the government. While the index of industrial production increased 5.7% in November 2016 compared to the previous year, rising non-performing assets and sluggish economic growth sparked a 60% decline in corporate borrowing over the last six years, IndiaSpend reported on January 13, 2017.

Some industrial recovery was apparent over the last two years, but notebandi--as the demonetisation exercise is referred to colloquially--set that back.

Notebandi and its impact on budget

The Rs 17-lakh crore demonetisation of the economy (click here to read our full coverage) slowed the growth rate to 7.1% from the earlier estimate of 7.6%, according to the December 2016 monetary policy statement by the Reserve Bank of India.

Growth for the second quarter (July-September) of the current financial year (2016-17) was down to 7.1% from 7.3% in the first quarter (April-June), according to November 2016 data from the ministry of statistics.

With only two years to go for the general elections in 2019 and the mid-point of the Modi regime, the grand challenge will remain generating over a million jobs per month, amidst worrying education levels and health indicators, both important factors in preparing India to cater to a working-age population of about a billion people in 2020.