It’s Not About Which Community You Belong, It’s About How Educated It Is 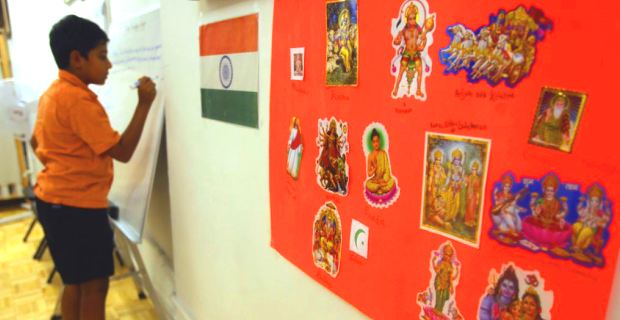 Highlights* Christians doing well across the country as they have better education, better jobs and better standard of living.

* For Muslims, lower education leads to higher unemployment and lower standards of living along with dwindling position of women

It does not matter which community you hail from in India but there are some things which are consistent across India. The crux, as data shows, is education. This might sound and seem axiomatic but the fact is that the more educated a community, the better its overall social indicators. And economic as well.

The National Sample Survey (NSSO), based on 2009-2010 demographics, education and employment, found, for instance, that Christians across the country seem to be doing well as they have better education, better jobs and better standard of living, which is reflected in their monthly expenditure. This is the last Survey that focussed on communities.

Christians represent only 2.4% of India’s population. But on the other hand, data on Muslims across the country shows that lower education leads to higher unemployment, lower standards of living and dwindling position of women, for instance sex ratio and participation in labour force.

Let us start with a look at the background demographics, according to religious communities. 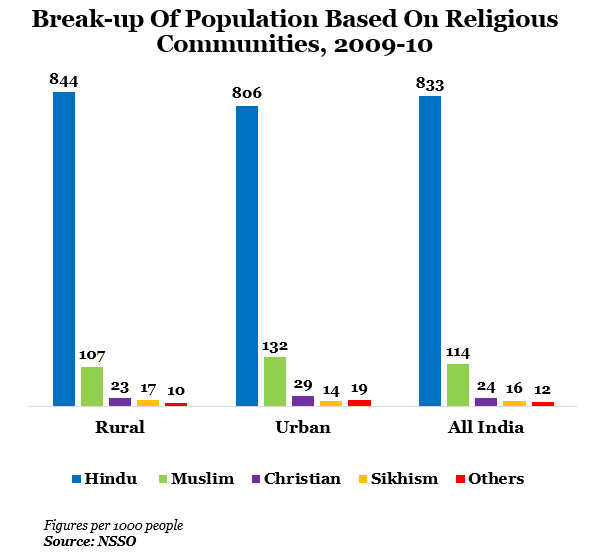 Nearly 84% households in rural India were Hindu followed by 12% Muslims, 2% Christians and others (including Parsis, Sikhs, Jains and Buddhist) 2%. In urban India, 79% were Hindu, 16% were Muslims, 3% were Christians while others were 2%.

Let’s break it down state-wise. More than 90% of households in Chhattisgarh, Himachal Pradesh, Madhya Pradesh and Orissa were Hindu. Jammu & Kashmir had the highest population of followers of Islam while Kerala has 21% of people who are Christians. It’s likely that Kerala’s overall good numbers help improve the average for the Christian community in the context of social and economic indicators. Or the other way around.

Let us now look at the sex ratios of different communities: 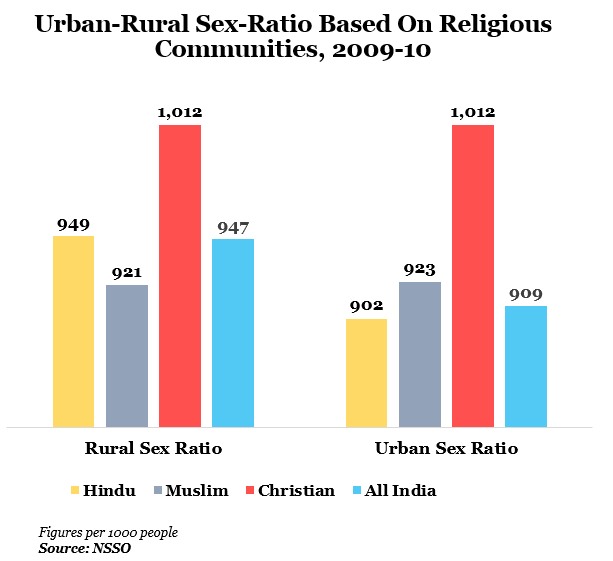 In rural areas, the number of girls came down from 952 to 949 in the same time period. While there was a decline in the sex ratio of 6.9% in rural areas among Muslims, it improved by 1.2% in urban areas in the same period.

Now a look at the family size: the all-India household size was 4.4 while the highest was among Muslims at 4.9 followed by Sikhs (4.7). The lowest was among Christians with 3.9 members per family. 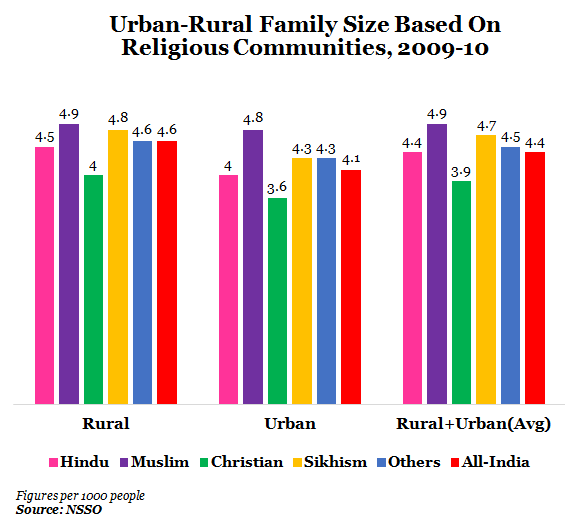 Educational attainment represents human capital accumulation, and determines, to a large extent, the employment prospects of an individual. The literacy rates for overall rural males, rural females, urban males and urban females were 74%, 50%, 90% and 76%, respectively. 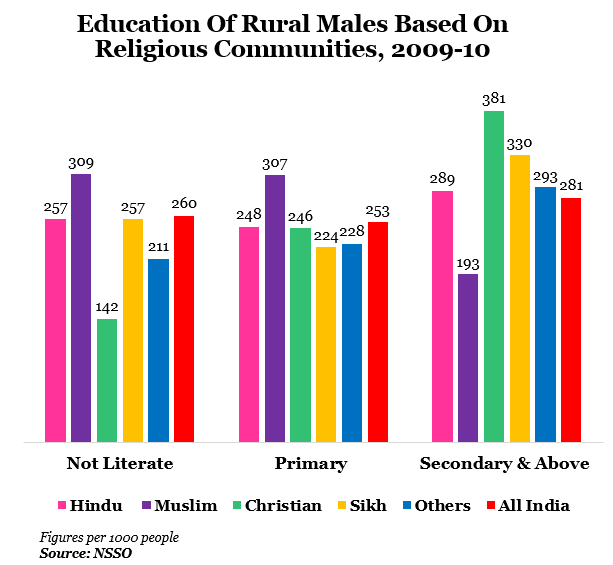 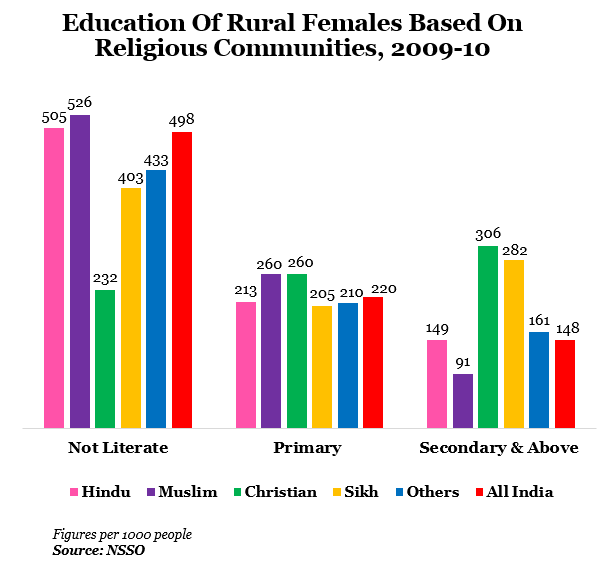 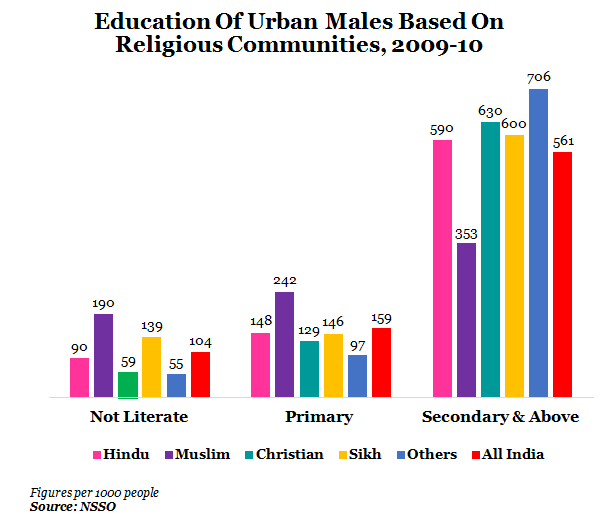 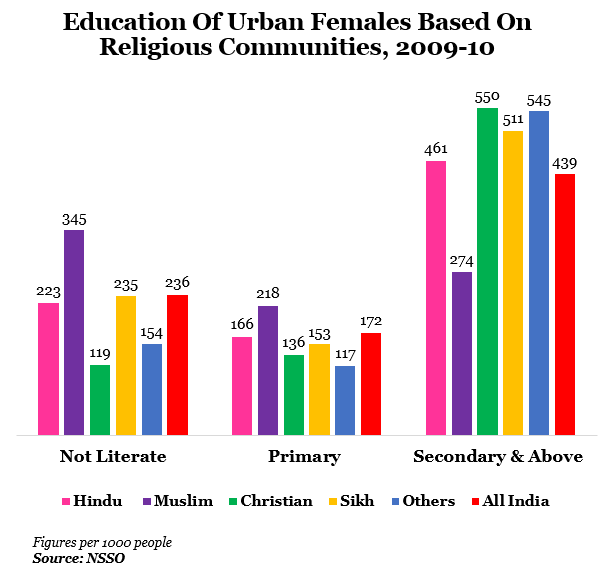 Not only did Christians have higher levels education among all communities, they were also the highest in the secondary and above educational level with 38 per cent, 31 per cent, 63 per cent and 55 per cent, for rural males, rural females, urban males and urban females, respectively. 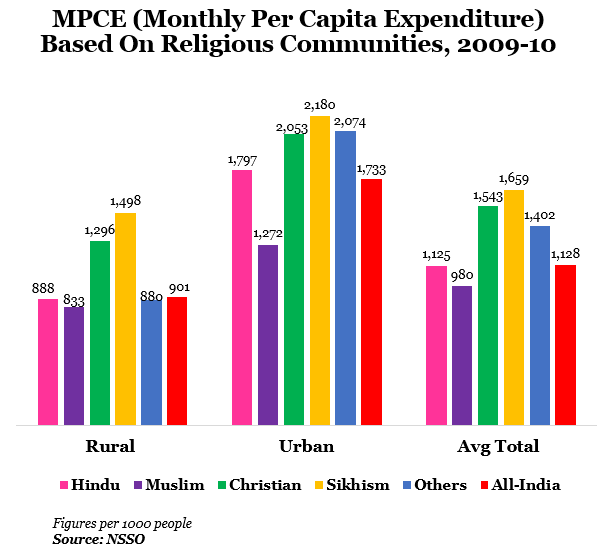 This division of labour can be explained since most Muslim households (91%) and Christian households (86%) own less than 1 hectare. On the other hand, Sikhs and Hindus were among the groups that owned more than 4 hectares. 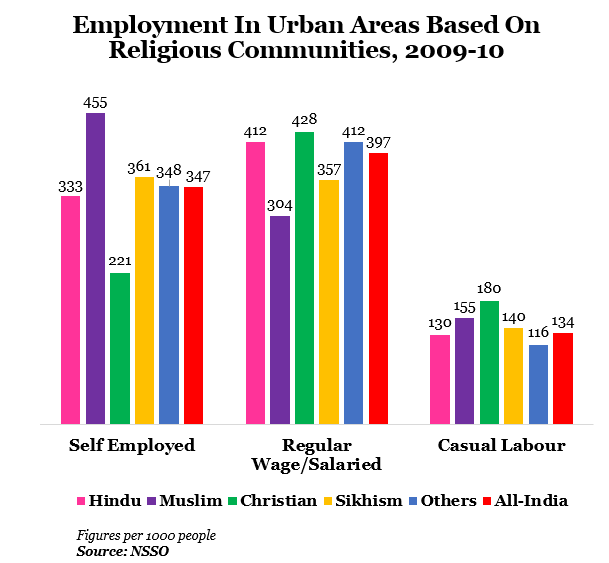 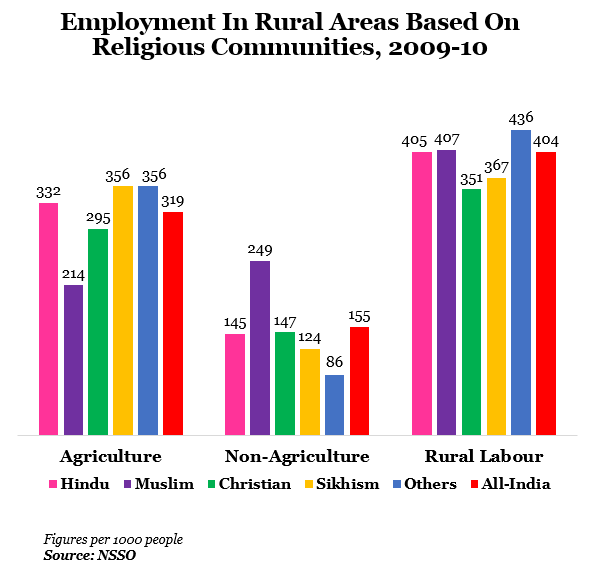 The NSSO study highlights the fact that there is a close relationship between education and employment. Christians, to continue with the illustration we started with, seem to be doing well as they have better education, better jobs and hence a better standard of living.

Another highlight is that Sikhs, who have ensured development through agriculture, seem to be taking education very seriously as seen by their increasing numbers in enrolments.

An improved sex ratio is another indicator that the more educated a community, the better it is for women and also smaller families. 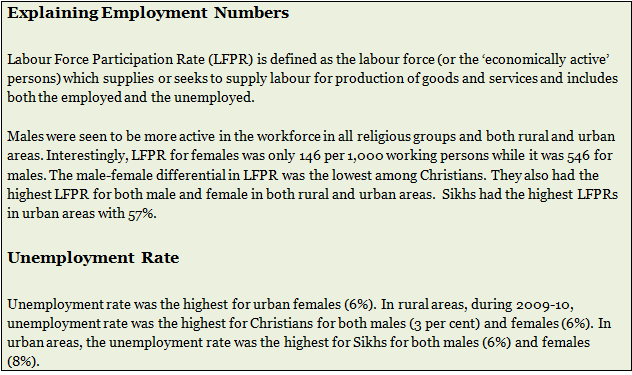