It Is A Matter Of Time Before India Faces Zika’s Deadly, Mutated Avatar 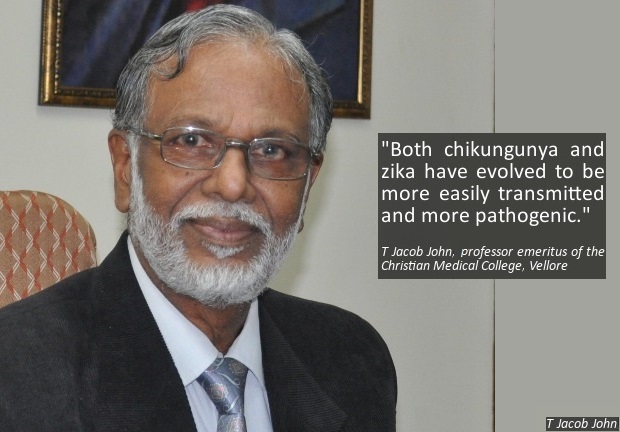 T Jacob John, 81, a professor emeritus of the Christian Medical College, Vellore, and one of India’s most experienced virologists believes the zika virus detected in three patients in Gujarat is an old strain first detected in the country in 1952, not the mutated strain that infected upwards of 16,000 people a week in Brazil alone at the peak of the 2015 epidemic. However, he expects that the mutated zika will come home to Asia/India at some point. “The question is not ‘if’ but ‘when’?" he told IndiaSpend, urging preparatory measures. "We have been warned with sufficient lead time to get prepared. But, have we been preparing? I have seen no sign.”

The viral progenitor of the 2015 zika epidemic that swept large parts of South and North America has been present in India (and other Asian countries) since 1952, as IndiaSpend reported in September 2016. India’s zika strain is an older, less virulent version that causes symptoms similar to dengue or chikungunya--like zika, these are diseases transmitted by the Aedes mosquito species--including fever, skin rash, conjunctivitis, muscle and joint pain, malaise or headache.

But the modern virulent strain that swept the Americas--causing microcephaly, a congenital deformity that creates babies with small heads and underdeveloped brains and the Guillain-Barré syndrome, which urges the body’s immune system to attack the peripheral nervous system--has not yet reached India. The government confirmed three cases in Gujarat to the World Health Organisation (WHO) in May 2017, six months after they were detected and kept under wraps because there was “no point in scaring people,” to quote Soumya Swaminathan, director general of the Indian Council of Medical Research. Thousands of patients across India with symptoms of the old zika symptoms were screened in secret so far.

Since the disclosure, India has been elevated in the WHO’s zika virus classification table from category four, “area with established competent vector but no known documented past or current transmission”, to category two, “area either with evidence of virus circulation before 2015 or area with ongoing transmission that is no longer in the new or re-introduction phase, but where there is no evidence of interruption”, meaning that zika was not known to be transmitting in India earlier but is transmitting here now.

At the peak of the 2015 epidemic, in Brazil alone, more than 16,000 people zika symptoms, and 50 people were hospitalized for Guillain-Barré syndrome every week; 2,336 Brazilian babies were born with microcephaly over the course of the epidemic.

T Jacob John, 81, a professor emeritus of the Christian Medical College, Vellore, and one of India’s most experienced virologists believes the zika virus detected in India to be the old strain, which is “nothing to worry about”.

But, he warned, it is a matter of time before India faces zika’s mutated avatar.

“We must expect that the mutated zika will come home to Asia,” T Jacob John told IndiaSpend in an email interview. “The question is not ‘if’ but ‘when’? We have been warned with sufficient lead time to get prepared. But, have we been preparing? I have seen no sign.”

Q: A 34-year-old new mother living in Bapunagar, Ahmedabad was India’s first case of zika in recent years. After she tested positive in November 2016, the Gujarat government embarked on a surveillance exercise covering people living in Bapunagar or Gopalnagar, a second area in Ahmedabad, who were suspected to have dengue or malaria. Dengue causes similar medical symptoms as zika. Close to 1,200 blood samples were collected by BJ Medical College, Ahmedabad, and sent to the National Institute of Virology for the zika test, where they yielded two more positives—a 22-year-old pregnant woman and a 64-year-old man. While the Gujarat government has been guarded about this exercise, based on the limited data available, we can conclude the prevalence of zika among patients with fever and other typical symptoms was three in 1,200 (or one in 400). Is this a high or low prevalence, and what does it indicate?

Three zika cases in 1,200 fever cases is indicative of a fairly wide prevalence, considering we are not in the middle of a zika outbreak. In an outbreak, three in 1200 is an extremely low prevalence. Since the 22-year old woman delivered a healthy child and there has been no noticeable outbreak of zika fever, my guess is that the zika virus strain in Ahmedabad is the benign avatar that has probably been with us for many decades. If that is so, there is nothing to worry about. It just tells us that zika is locally transmitting—inefficiently and innocuously. However, if the virus in Ahmedabad is the evolved Latin American avatar, that would portend impending epidemic and disaster. That crucial genetic differentiation must be going on in the National Institute of Virology; we will have to wait for the result. Whatever the outcome, now is the time for deliberate scientific investigations. The health department must investigate the strain in greater detail. When the information indicates a zika outbreak, the community must be informed and provided instructions on how to minimise risk of infection. All the precautions against dengue apply for zika also.

Q: Of late zika cases recorded globally have either been travel-related, meaning the patient had travelled to an area where zika is endemic, or locally-acquired cases, where the infection was picked up from the community. Countries have seen either one or both of these types, sometimes with a significant time gap between the presentations of the two types. For instance, mainland US declared its first locally-acquired case of zika in late July 2016, although its first travel-related case was almost a decade earlier, in 2007. India’s first zika case was local, based on a WHO update that says the woman had not travelled in the three months prior to acquiring the infection. What does the local acquisition of the disease imply?

If a traveller is found infected, the transmission occurred where he or she travelled from. Whereas, the local acquisition of zika signals four elements—one, the infected donor; two, the local presence of the virus; three, the transmission vector, the Aedes mosquito; and four, a susceptible set of people. If infected mosquitoes are imported, say through baggage or incoming aircraft, the infected donor need not be present. The local acquisition of zika implies that an outbreak has already been seeded. Its implication is the potential for further spread.

Q: India first saw an outbreak of chikungunya, zika’s cousin, in the mid-sixties. Chikungunya then went off the radar, only to return in 2002. Did it return in a more virulent form? If so, is this a good indication that zika is likely to evolve in India? How might it evolve?

Yes, the chikungunya that struck India in 2002 was a mutated version, just as the zika that struck the Americas in 2015 was a mutated version of the benign infection we have known. Actually, the virulent Latin American version began in the Pacific Islands in 2007. zika has mutated possibly in its NS1 gene to become a virulent virus exquisitely efficient in reproducing in host cells and in the host organism—and hence spreads faster from man to mosquito to man. It is also more pathogenic (disease-causing), infecting and damaging a fetus in utero, and can cause the Guillain-Barre syndrome. Public health authorities in the Pacific Islands failed to detect the higher frequency of Guillain-Barre syndrome during the zika epidemic in 2007.

Essentially, both chikungunya and zika have evolved to be more easily transmitted and more pathogenic. They present very similar behaviour. So, we must anticipate an outbreak of more virulent zika in India as well. As for exactly what evolved form of zika India will see, or how zika will evolve next, that is beyond prediction.

Q: What does India need to do to prepare for the eventuality of a zika outbreak? Given the limited laboratory testing facilities across the country, would we even get to know whether a patient has dengue, chikungunya or zika? And would that make a difference to how a patient is treated?

Lab facilities and disease surveillance and so on are entirely man-made to fit the need. You may be interested and I may be too—but is the State (generic for governments at all levels) interested?

A country that has no state programme to control dysentery, cholera, typhoid fever and a host of other infectious diseases that the enlightened world got rid of in the early 20th century, cannot have a programme to prevent and control viral diseases. You don’t go to middle school skipping primary school. If you do not have a programme to prevent and control, how important is it to know in the individual subject if it was dengue, chikungunya, zika or something else, such as leptospirosis, scrub typhus or enteric fever? Diagnosis helps identify treatable (diseases), like leptospirosis, scrub typhus, enteric fever, bacterial diseases, that must be treated very early to prevent death. There is no specific antiviral treatment for the zika virus infection. Dengue cases need follow up to identify if severe dengue develops, which necessitates urgent treatment.

Can a country that does not “practice” “public health” suddenly put together all the pieces and create a public health infrastructure to prepare for zika outbreak? This fundamental question is exercising my mind at this time.

Q: Does previous infection with dengue promote susceptibility to zika or worsen the infection? How, and why?

Yes, to both. That has been observed and documented, but I am not an expert on the virology of that combination.