Is Data Noise Drowning Out The Chinkara’s Sneeze? 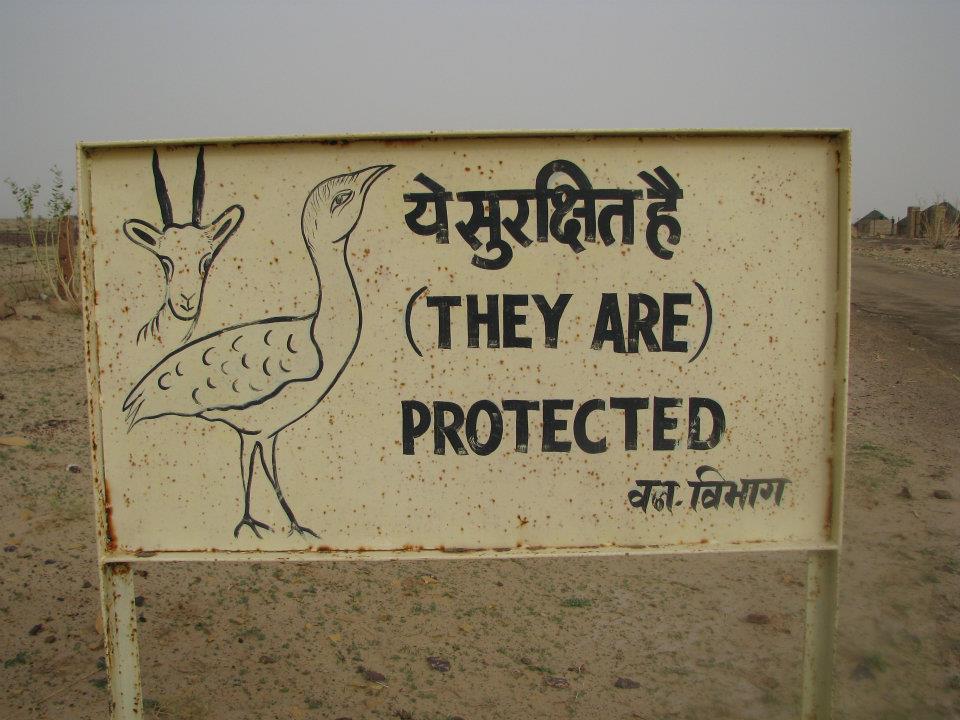 (A notice board at Desert National Park carries sketches of the chinkara and the great Indian bustard. Photo credit: Dr Sumit Dookia)

All of 16 years old, a court-weary case is nearing its denouement: On November 5, the Supreme Court reserved its judgement on the infamous Salman Khan poaching case.

In 1998, Salman, one of India’s most famous Bollywood stars, was accused of hunting and killing a blackbuck and two chinkaras, a type of gazelle. Suspect partners in crime include fellow celebrities Saif Ali Khan, Sonali Bendre, Tabu and Neelam, all of whom have made visits to the Jodhpur sessions court in the desert state of Rajasthan.

But for all the wide-eyed attention and national headlines that the stars attracted over the years, the chinkara faded from public view. Now, as IndiaSpend has learned, the wide-eyed, fragile-looking gazelle is at the heart of a data controversy that, if deciphered, could tell us if it is fated to survive or die out.

The question swirling around the data mess: Is the chinkara, helped by the government and traditional protectors, flourishing or—pushed by growing towns and hunted by feral dogs—hurtling towards extinction?

The answer depends on whose data you examine.

The Rajasthan forest department’s chinkara census shows an 11% rise in the animal’s numbers over three years to 2013, while counting done by biologist Dr Sumit Dookia, who has spent about 15 years studying the chinkara, shows a 43% decline in its numbers in six representative sample sites.

Why should the chinkara and its data controversy matter?

It’s not as if the chinkara is a keystone species, one that exerts a large effect on its ecosystem. Still, as research associate with the Wildlife Institute of India, Dr Sutirtha Dutta explains: “The chinkara is specialised to arid habitats and ecologically important, as it influences vegetation structure and acts as prey for some mammalian predators (jackal and wolf in some landscapes and, once, the extinct cheetah).” 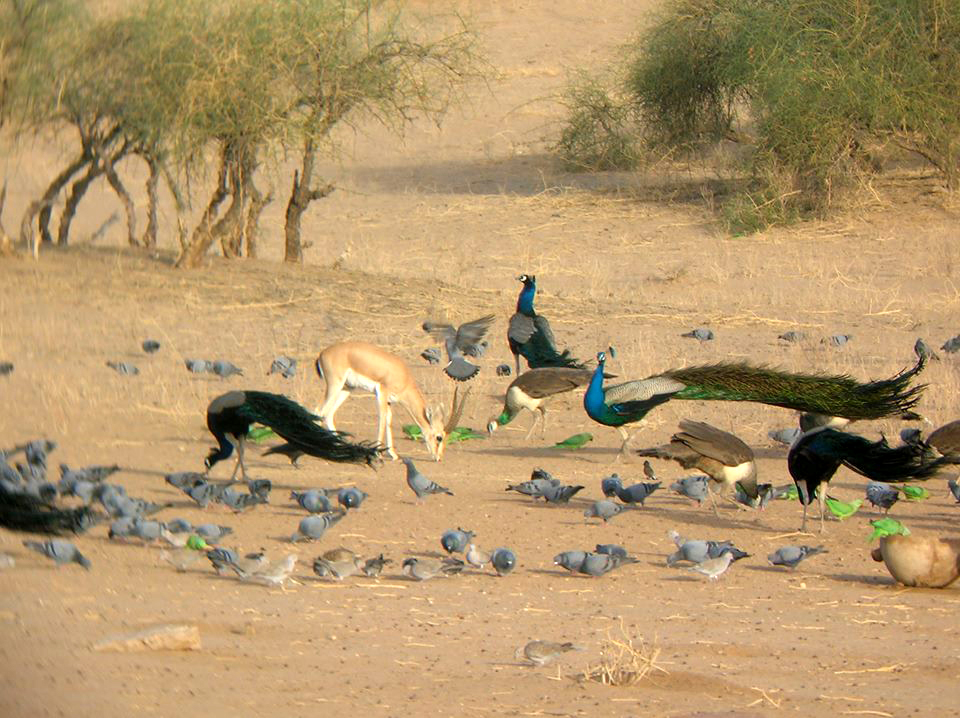 (A chinkara, peacocks, peahens, pigeons and other birds feed together at one of the study sites. Photo credit: Dr Sumit Dookia)

A better understanding of how specialised the chinkara is to arid habitats, and in particular, the great Thar desert, is available in a study sponsored by the Zoological Survey of India: Status Survey of Chinkara and Desert Cat in Rajasthan. Its principal researcher K. L. Kankane observed that 85% of the 100,000 chinkaras in global existence are found in Rajasthan, with the highest density in the southwest precincts of the state, the area where Khan and his friends allegedly poached their chinkara.

Dr Dookia, assistant professor at the School of Environment Management, Guru Gobind Singh Indraprastha University, New Delhi, said the districts of Jodhpur, Nagaur, Bikaner, Jaisalmer, Barmer and Pali are home to nearly 70% of Rajasthan’s chinkara population. So, the worry is that if Rajasthan gets its wrong, the chinkara is doomed.

Government statistics display an increase in the overall chinkara population (between 2010 and 2013), from 34,970 to 41,099. This includes chinkara living in protected habitats and outside, where they are reasonably protected, not by law but faith.

The Bishnoi: Why the sneezer lives on

At this point it is important to mention the Bishnoi community, which look upon the chinkara as a sacred animal that must be protected. It was they who filed a complaint against the star and took to the streets to drum up support for the case when the State was slow to respond. They went on to present evidence that led to Salman’s conviction. 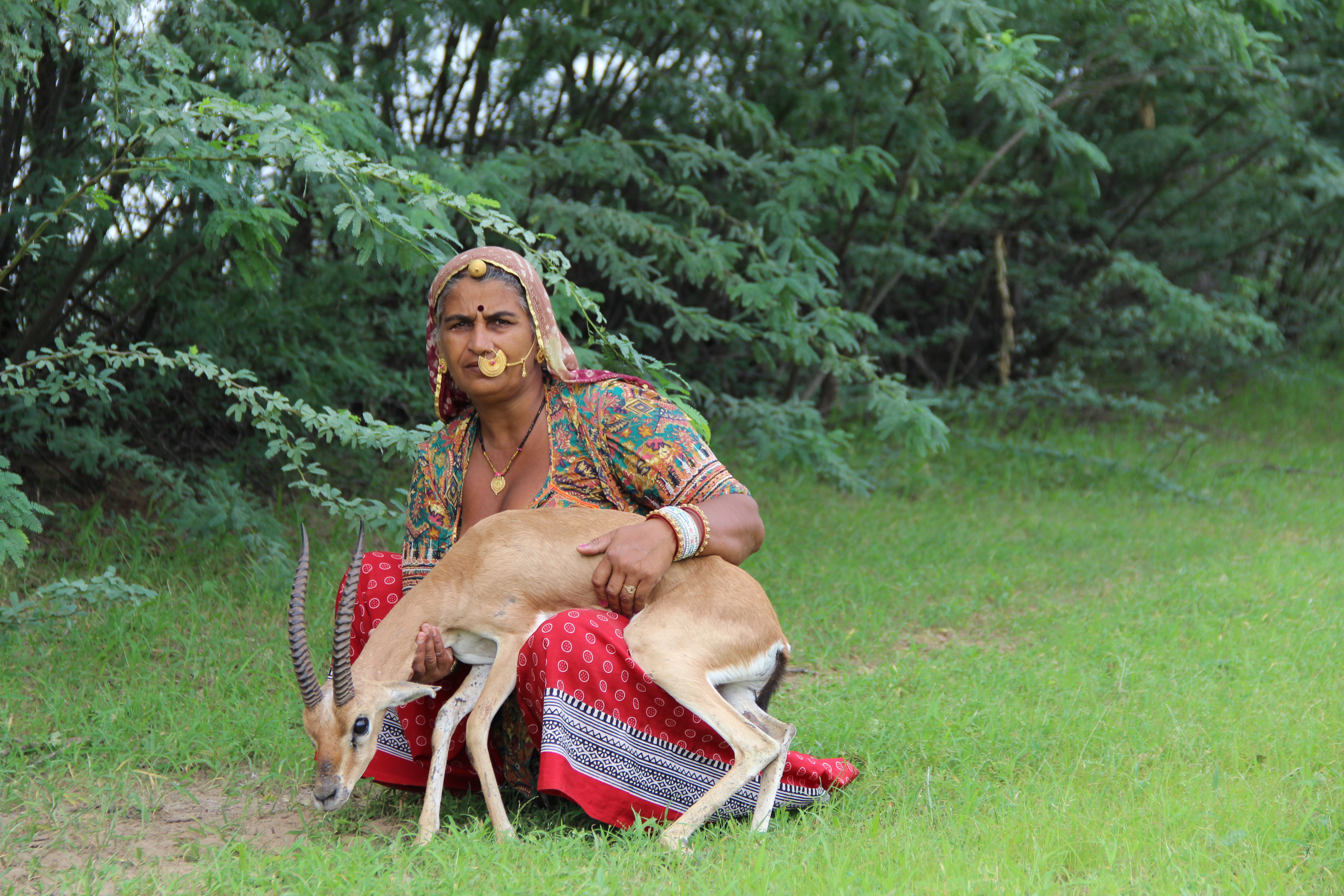 (An injured male chinkara is rescued by a Bishnoi woman. After a few hours, it was moved to the rescue centre at Jodhpur Zoo. Photo credit: Gajendra Singh)

The Bishnoi live outside the protected chinkara habitats. Chinkara literally means ‘the sneezer,’ a name that evolved because the animal stamps its forefoot and makes a sneeze-like sound when alarmed. Bishnois are quick to respond to such distress calls—any time of the day or night. They sensitise their young to the sneeze of a chinkara.

(A chinkara is given a respectful cremation as per Bishnoi rituals in a graveyard in the backyard of the Guru Jambeshwar Temple in Guda Bishnoian, Jodhpur district, Rajasthan. Photo credit: Gajendra Singh)

Chinkara sightings are most frequent near villages of the Bishnoi and of other communities practicing non-violence against animals, such as the Charans, Jains, Jats, Meghwals, Rajpurohits and Sidhs. Fewer chinkara are seen near Muslim and Rajput villages.

Successive forest department censuses put out wildly fluctuating figures of chinkara numbers. The census pegged the number of chinkara inside protected areas at 5,251 in 2012 and at 4,085 a year later. The chinkara population in the protected Desert National Park plummeted from 2,705 to 1,779 over the same period. The office of the Chief Conservator of Forests, Wildlife, Jodhpur, attributes this 20% fluctuation to the higher number of waterholes where chinkara were counted in 2012: 110 water holes versus 66. Water pipeline leakages had formed extra waterholes which the herds visited. The state’s forest department relies on these traditional waterhole-based counts.

At best, done well, the waterhole-census method can generate surrogates of chinkara – extrapolations from observed animals - and can provide population trends over years. At worst, the method can lead to inaccurate census data.

This is what Dr Dookia thinks is happening. He started to study the chinkara at three sites in the districts of Jodhpur and Nagaur in 1999, while pursuing his doctorate in zoology. Between 2006 and 2009, he received support from the Rufford Small Grants Foundation, UK, for three more studies on the chinkara, allowing him to expand sites to six and train volunteers in what is regarded as a more scientific method of counting large animals over a large area: The line-transect method, which involves counting animals along fixed lines and estimating their density from raw counts and probability.

A line transect is more laborious than a stationary waterhole census since it involves travelling along many imaginary lines.

In 2014, a collaborative survey on the chinkara, great Indian bustard and other desert species in Thar, conducted by the Wildlife Institute of India and Rajasthan Forest Department, did use a vehicle-based line transect method for counting these species’ numbers across a large landscape (25,000 sq km). This will serve as an important baseline study for future.

Dr Dutta described the method as “scientific, robust and widely used for wildlife surveys to generate accurate population numbers”. Its added advantage over the traditional waterhole-based census method is that it accounts for the fraction of animals that are not detected, he said.

In 2010, Dr Dookia joined Guru Gobind Singh Indraprastha University, New Delhi. In 2012, he received a Young Scientist Fellowship from the Department of Science & Technology, Government of India, as well as funding to continue studying the chinkara in his six chosen sites.

The chinkara is listed as “Lower Risk/Conservation Dependant” in the International Union for Conservation of Nature’s Red Data List (2014) of threatened species, and as an endangered species in Schedule I of India’s Wildlife (Protection) Act of 1972.

Why are chinkara numbers dwindling? Nobody believes Salman and his friends affected the chinkara.

“The impact of poaching is minimal,” said Dr Dookia. “The main reason for the decline in

chinkara is loss of habitat to urbanisation.”

Guda Bishnoian village is one of Dr Dookia’s six sites. Barely 12 km from Jodhpur city, it’s one of the sites where Salman Khan ran into trouble for shooting a blackbuck. Plots are being drawn on almost all the land here for housing schemes. Local land owners are eager to earn a windfall from selling their holdings—at unprecedented rates of Rs 20 to Rs 25 lakh per bigha, a variable measurement that can range from 0.4 to three hectare.

However, such encroachment on the habitat of chinkaras, of their natural predators the wolf, and of other animals such as the blackbuck, jackal and porcupine, is pushing the animals further east—into unknown, less hospitable terrain.

Chinkara living on the fringes of civilization are attacked by stray dogs. “There is considerable chinkara death due to feral dogs, which are supported by human settlements but opportunistically feed on wild prey (chinkara, spiny-tailed lizard, small mammals and birds etc.) and can cause major impacts on the latter’s populations,” said Dr Dutta. It doesn’t help there just isn’t money to tend to wounded animals. 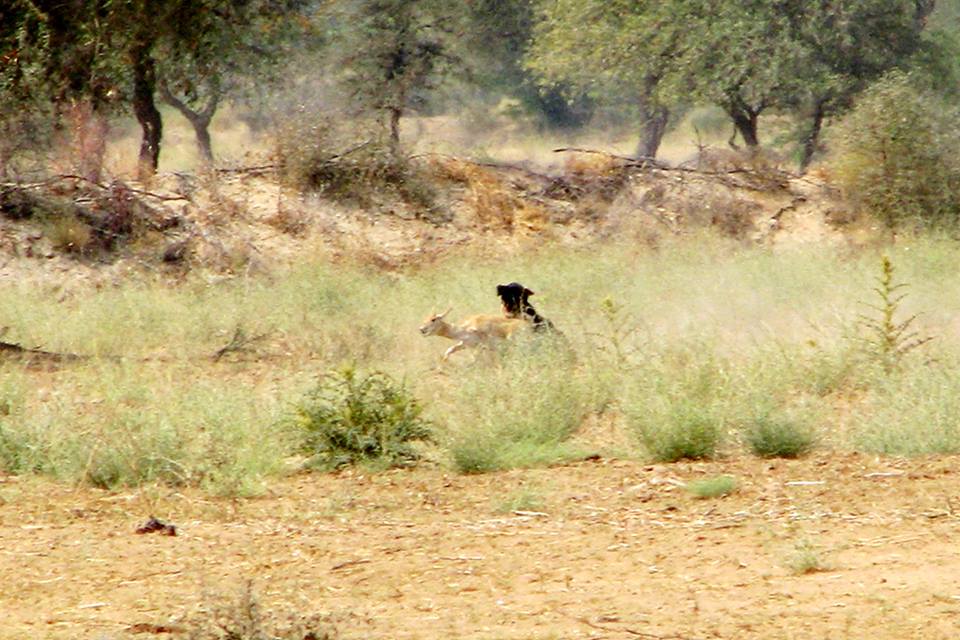 According to Dr Dookia, the most successful and natural conservation method involves grassroots stakeholders whose daily lives are inseparably entwined with the local ecosystem. “We need more Conservation or Community Reserves, areas inhabited by humans but where endangered animals and/or birds can live and move about freely,” he said.

It is also time for a rethink of wildlife-census methods. If species aren’t accurately counted, there may come a time when the chinkara might stop sneezing—and no one will miss it.