Infrastructure, Realty Trusts Can Now Set Up Business In SEZs, But Will This Increase Exports?

New Delhi: The new expanded definition of a “person” who can set up a unit in a special economic zone (SEZ) can help increase the number of exporting units in India and help utilise the full potential of the land in these zones, experts say, though it may not further the SEZs’ basic purpose of increasing the country’s net exports.

The Centre amended the Special Economic Zones Act (SEZs Act) in August 2019 to broaden the definition of “person” who can set up their units in these zones. After the amendment, "trust” or “any entity as may be notified by the Central Government" can set up their operation in SEZs.

The bill does not review taxes imposed on units inside SEZs, nor does it address fine-tuning of the policy according to state- and sector-specific requirements, rising dependency on imports, or lack of connectivity and infrastructure, experts pointed out.

SEZs are clusters developed to foster industries which can help boost exports. The government has, so far, notified 351 SEZs of which 232 across India were operationalised. However, about 150 SEZs across India remain non-operational, with half of the land notified for SEZs lying vacant. 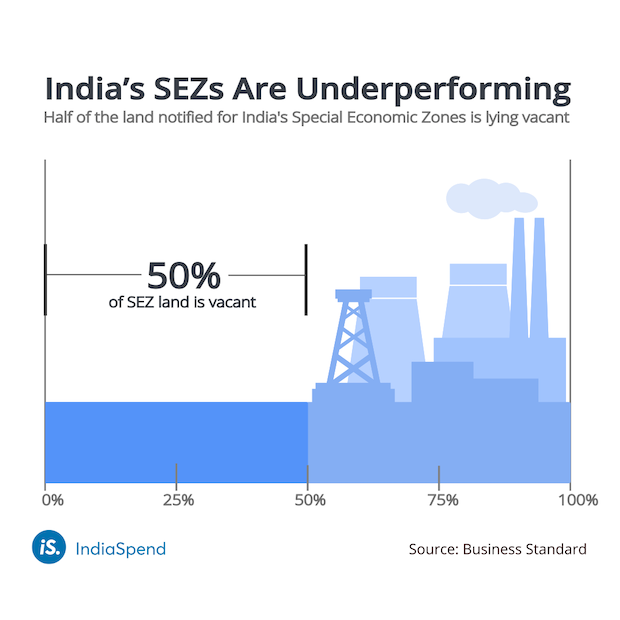 The establishment of these SEZs has also fueled land conflicts ever since their inception. About 11 such conflicts have been recorded so far by Land Conflict Watch (LCW), an independent network of researchers and journalists across India mapping land conflicts.

This is the fourth story in our series examining the 35 bills that the 17th Lok Sabha (lower house of parliament) passed during its last session, when it worked for 281 hours over 37 days to pass a bill every eight hours on average, referring none to a committee for detailed scrutiny. The SEZ bill was passed on August 5, 2019, when the lower house of parliament abrogated Jammu and Kashmir’s special constitutional provision. Critics say many approved bills had infirmities that further debate and committee appraisal could have ironed out.

After the amendment, infrastructure investment trusts and real estate investment trusts (REITs) will be permitted to operate in SEZs, Sharmila Kantha, principal consultant, Confederation of India Industry, an industry body, told IndiaSpend. The construction and development of SEZs can benefit greatly from the REITs which have attracted significant investor attention.

The government is planning to create large Coastal Economic Zones (CEZs) consisting of a series of SEZs, and this process will involve real estate and infrastructure development where these entities [REITs] can participate, Kantha said.

CEZs are economic regions, which can comprise of many SEZs, that are being developed by the Indian government along the country’s coastline, to utilise port connectivity. They are part of the Centre’s ambitious Sagarmala project that aims at port-led industrialisation. Ports would be developed across all the coastal states and union territories, which would reduce the time and cost of cargo movement, and hence, boost exports.

Businesses and ports that are fashioned as trusts will now be eligible to invest in SEZs. The amendment will therefore open up a plethora of new investments and help promote exports, Kantha said.

Before bringing the bill, the government had passed an ordinance to allow trusts inside SEZs. This step was criticised by other parties in the Lok Sabha. “Large chunk of trusts owned by minorities have been shut down under the previous Act. There are suspicions that the government has a hidden agenda to favour a selected few who are close to the government and have vested interests,” D N V Senthilkumar, DMK party leader, had said in the Lok Sabha, The Hindu reported on June 26, 2019.

An increased number of units in SEZs would improve their utilisation--many SEZs are spread across more than 400-500 acres (equal to 378 football fields combined) but have only a few exporting units, resulting in acute under-utilisation of the land allotted, said Malini Laxminarayan Tantri, assistant professor, Institute for Social and Economic Change (ISEC), a Bengaluru-based interdisciplinary research and training institute.

“Removal of the sunset clause is more urgent [than allowing trusts to set-up their businesses inside SEZs] as the clause is creating doubts in investors minds,” Anand Giri, deputy director, Exports Promotion Council for EOUs (Export Oriented Units) and SEZs, an arm of the commerce ministry, told IndiaSpend.

According to the clause, only SEZs operationalised before 2020 would be able to enjoy the fiscal benefits of the policy.

There are still many notified SEZs that are yet to start operation, which see no benefit in starting their operations if the sunset clause does not end. It should be withdrawn urgently for at least the 351 notified SEZs, Giri said adding that decline in investments in SEZs would mean decline in jobs and growth of exports.

The concept of SEZs was first introduced in India in 2000. Before that, India had a number of export processing zones (EPZs), which also aimed to boost exports but lacked infrastructure and attractive fiscal packages, and involved complicated regulations.

To overcome these shortcomings, India announced an SEZ policy in April 2000, and enacted the SEZ Act in 2005. The Act exempted export-related profits from income tax for the first five years, and applied income tax on 50% of such profits for the next five.

Currently, besides tax exemptions, industries set up in SEZs enjoy fiscal benefits including duty-free import and purchase of goods, exemption from goods and services tax and levies imposed by state governments. 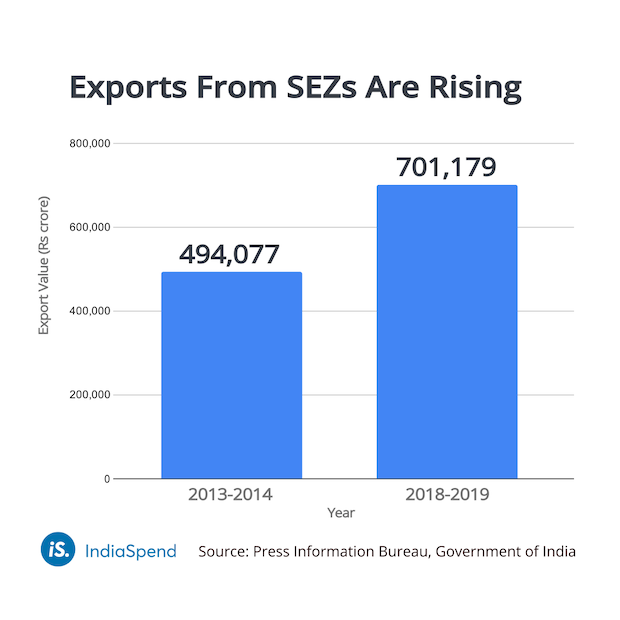 However, these numbers do not attest to the success of the current SEZ policy, experts told IndiaSpend.

“Does it not indicate realignment of investment and exports from non-SEZ domestic trade areas to SEZs?” Tantri said, adding that to ascertain the real success of SEZs, their “import intensity” would have to be assessed but the government of India has stopped publishing those details after 2010.

Import intensity of exports is the degree of value addition to an imported item that subsequently gets exported. It shows the dependence of exports on imported raw material. In the Indian context, gems and jewellery is a typical example of an export product with high import intensity.

In 2007-08, SEZs had an import intensity as high as 75%, with an increasing trend noticeable after 2000, compared to the earlier EPZs structure, according to a 2010 study that Tantri wrote about in the journal Economic and Political Weekly (EPW).

Compared to some other countries where such zones have catalysed exports, Indian SEZs have under-performed, said Kantha of CII. Exports from SEZs have grown much faster than overall exports in recent years, showing that they are becoming more popular with exporters, she added.

SEZs can become a more dynamic and potent instrument for expanding exports with some additional steps, including setting up the new SEZs in CEZs as envisaged under the Sagarmala port-led development strategy, as CEZs have strong hinterland connectivity to create domestic supply chains, Kantha said. Proper interlinkages with the domestic tariff area should also be ensured.

Minimum alternate tax (MAT) imposed on entities in SEZs could be reduced, Kantha said, referring to the Centre’s 2011 decision to impose an 18% MAT on book-profits, which applies despite their income tax exemptions. In September 2019, the government slashed MAT to 15%.

The SEZ policy should include low-cost worker housing and amenities to attract workers from different parts of the country for labour-intensive exports, Kantha added.

Tantri, on the other hand, was of the view that fiscal incentives to companies operating or setting up inside SEZs should be kept in check. “Undue emphasis on incentives may just lure investors to shift their production base rather than encouraging new investments in an economy,” she said. “Under such circumstances, SEZs may not really have any value addition to the economy.”

The SEZ policy should be fine-tuned as per sector- or state-specific priorities. Emphasis should be laid on making it easier to do business within SEZs, Tantri said.