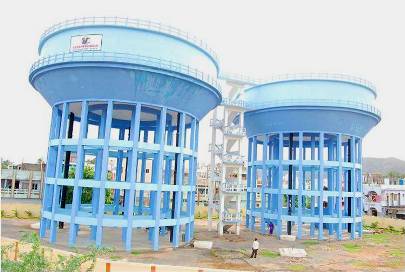 A quarter of the country's population is already living in cities and the urban economy contributes nearly 85% of tax revenue. While urbanization is considered as an engine of growth there is neglect of the urban areas by the Indian government. The government invested around Rs.75,000 crore for the rural sector in the year 2009-10 while the allocation for the urban sector was Rs 6,396 crore. This neglect has created huge infrastructure challenge not only to the new population but also the backlog of the past. Most cities are overcrowded and have a very poor standard of living due to inadequate infrastructure like clean water supply, sewerage and public transport to support the growing population.

The government launched the Jawaharlal Nehru National Urban Renewal Mission (JNNURM) in 2005-06 with a proposed funding of Rs 1,00,000 crore in order to fast-track development of cities across India. It is a comprehensive effort by India’s Central Government to improve urban infrastructure in creaking cities and towns. JNNURM has been a policy innovation in itself: one of the most interesting aspects of the scheme was not just providing funding to urban local bodies with grants to develop infrastructure facilities but also wanted these bodies to implement reforms to strengthen their financial sustainability by opening new revenue streams. 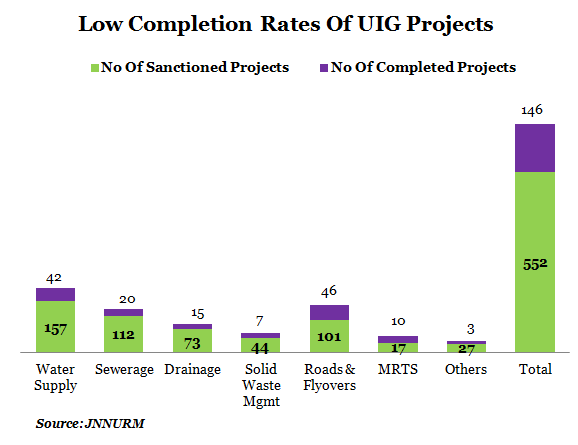 UIDSSMT is focused on 644 small and medium towns with 979 projects. Under UIDSSMT, 524 projects are dedicated to water supply followed by 122 projects pertaining to roads and flyovers. Only 121 projects have been completed out of the 979 sanctioned projects. 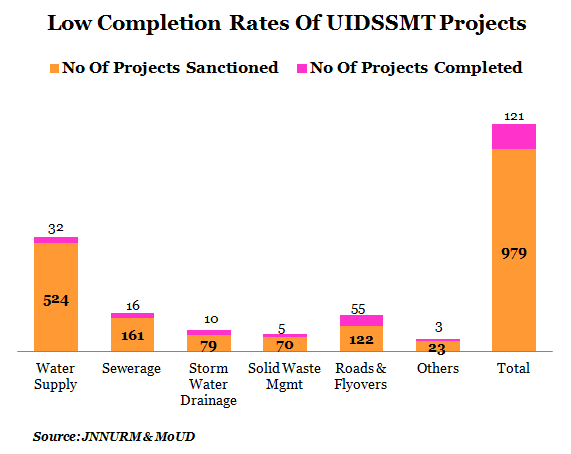 JNNURM, though a policy innovation, cannot be deemed as a complete success. The following can be regarded as some of the challenges for JNNURM.

One of the key challenges for JNNURM was capacity building. This was the reason for many of the states not even applying for the grants. The states that did apply for the grant and manage to get their projects sanctioned could not complete the projects also due to lack of capacity. Capacity here refers not just to the financial capacity to raise their share of funds for the projects but also the lack of skilled human resource to oversee the projects and/or map out the city development reports.

Another important challenge, which was brought into light, was the inability to raise finance for projects. Under JNNURM, the central government was going to provide a certain percentage of the approved cost of the projects while the rest was the responsibility of the state government and the urban local bodies. In this case, many urban local bodies simply could not raise their share of finances because they lacked the organizational structure required to raise finances. They were dependent on state government grants to carry out daily order of business.

Another reason to be highlighted is that the money offered under JNNURM was utilised unevenly. States with past experience of implementing large urban infrastructure projects with multilateral agencies responded immediately to the mission and availed of its benefits. This helped them move faster in preparation and implementation of the projects under JNNURM. It needs to be remembered here that apart from Gujarat and Karnataka, there has been slow completion rate in states like Maharashtra as well

Much of the delays were caused due to land use laws, especially for projects dealing with roads, sewerage and water supply. JNNURM did not provide money for private land acquisition as the burden of this was to be borne out by the state governments and ULBs with the exception of states of J&K, Himachal Pradesh, Uttarakhand, North-Eastern states. In Haryana, the government auditor, Comptroller & Auditor General (CAG) noticed that JNNURM money was used to acquire private land for building collector wells for a price of Rs 203.86 crore.

The total investment envisaged for the scheme was Rs 1, 00,000 crore of which the central government share was to be Rs 66,084 crore. 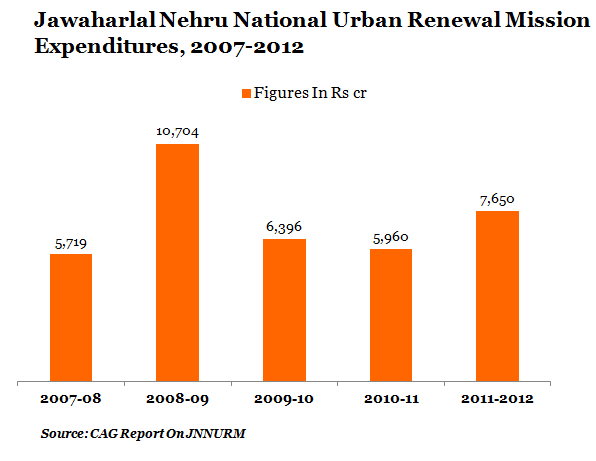 It can be seen as effort on the part of the government as an effort to recognize the changing realities of India but clearly more needs to be done.