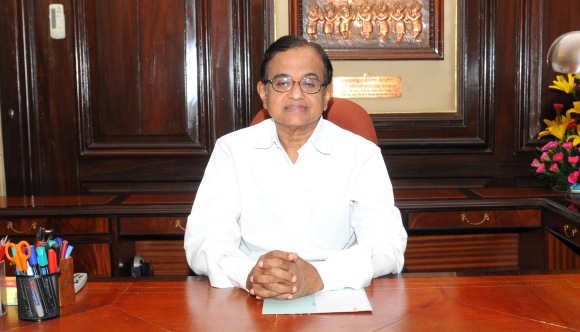 Budget 2013-14 is interesting for a number of reasons. First, there was a change of guard at the Finance Ministry and P. Chidambaram is back after a stint as Home Minister.

Second, it is the penultimate Budget before the General Elections scheduled for mid-2014. Since elections will be held only a few months (if on schedule) before the 2014-15 Budget, it’s quite likely this is the UPA-II Government’s final chance at getting the government finances and the economy back on track.

Third, the current economic scenario. The government faces three major issues - slowing economic growth, high fiscal deficit and continued high inflation. Tackling all three is a tightrope walk and most budgetary decisions would have far-reaching consequences for the economy.

Against this backdrop IndiaSpend contributor Manika Premsingh looks at the three key macro-economic numbers to watch out for in Budget 2013-14:

1. Fiscal Deficit–GDP ratio: Fiscal deficit, which is the gap between government expenditure and revenue, is the single most important metric to measure the government’s performance. It is most often seen as a ratio of GDP, to get a sense of how sustainable the deficit is in the overall economic context.

In contrast, the five-year period since (including Budget Estimates for 2012-13), the ratio has averaged 5.7% (Fig 1). A high fiscal deficit can be worrisome for an economy since it needs to be funded through government borrowing, which can lead to inflation and higher interest rates in the system. Given the potentially inflationary impact and adverse impact on investments of a high fiscal deficit, it is essential to keep it in check when the government has been facing persistently high inflation and slowing investments.

Perhaps in keeping with this concern, last year’s Budget had targeted a fiscal deficit-GDP ratio of 5.1%, which was expected to be lower by a good 0.8 percentage points from the 2011-12 number.

However, one would look at the data more critically. For two reasons. One, fiscal deficit up to December 2012 touched around 79% of the Budget estimate. And two, GDP has come in much lower than expected in the Budget speech where it was forecast to increase by around 7.6%.

Thus, the FM’s expectations on the fiscal deficit front for the remaining part of 2012-13 and the Budget estimates for next year will drive the health of the economy. 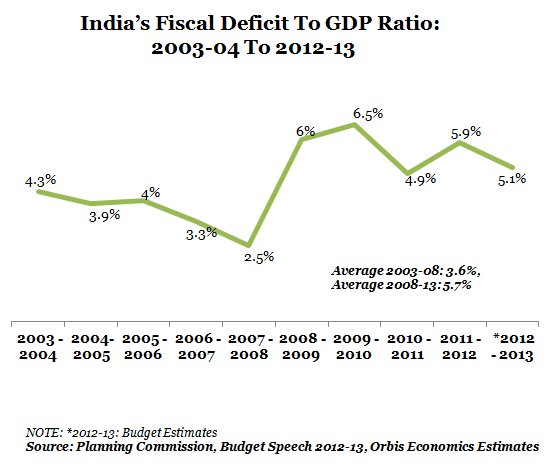 A special note here on subsidy reduction, which is one of the goals of the central government since there has been slippage in the recent past (2011-12) on account of higher-than-expected crude oil prices. In his Budget speech last year, then Finance Minister Pranab Mukherjee had noted that of the three major subsidy items – food, fuel and fertilisers – some are inevitable.

To that extent, while food subsidies were to be provided in full, fuel and fertilisers subsidy was to be limited as far as possible. While the goal of capping subsidies at 2% of GDP is unlikely to be met, Budget 2013-14 will be important in so far as it suggests the extent of subsidy reduction in fuel and fertilisers, which, in turn, will determine inflationary conditions in India in the year. 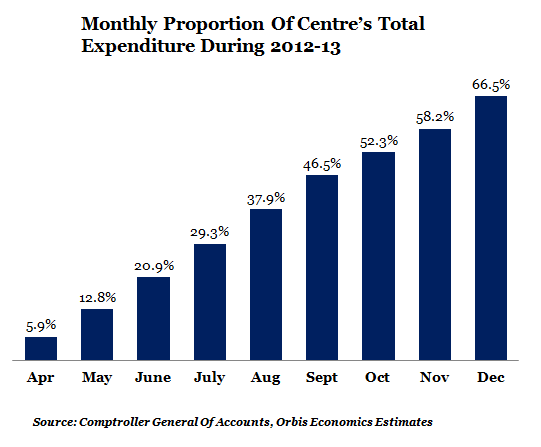 3. Revenue collections: Tax revenues, which accounts for a large part of the centre’s overall revenue collections, have a strong correlation with overall economic growth since it comes in large part from companies. With India’s GDP growth numbers dipping to less than 6%, it is hardly surprising that tax revenues have been muted for 2012-13 so far.

The numbers up to December 2012 show revenues at 61% of overall Budget estimates. So, Budget 2013-14 is also important since changes to tax rates are the focal point of any Budget. The government this time has the unenviable task of striking a balance between increasing tax rates to mop up more revenue and running the risk of derailing the economy further.

This is because higher taxes could increase costs as well as prices, forcing a cut in consumption expenditure that further impacts growth negatively. The other option of course is to keep tax rates as they are and have lower revenue targets in an year when growth is expected to remain moderate.

It could, however, look at having a more ambitious disinvestment target this year. Disinvestment refers to the part-sale of government holdings in public sector units as India moves towards a more market-driven economy. This is more possible now since the equity markets have become relatively buoyant over the past few months. But then, the Government has failed to meet its Rs30,000croredisinvestment target in 2012-13. Actual figures are closer to Rs. 20,000 crore up to the Budget day (Rs. 8,000 crore up to December + Rs. 11,470 crore from power utility NTPC’s public offer in January).

Thus the three numbers – fiscal deficit-GDP ratio, total expenditure and revenue collections - will give a good sense of where the government sees the economy heading next year.

While the Finance Minister might not like to squeeze individuals and corporations by raising taxes, fiscal deficit remains a concern and appeals to roll back indirect tax rates from last year might not find favour with him. A better than expected fiscal deficit-GDP guidance could still be likely as government finances are streamlined through cuts in subsidies and higher disinvestment targets rather than ambitious tax collection targets. 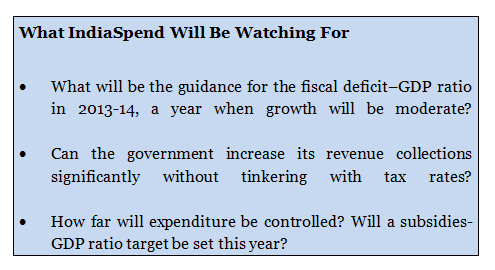