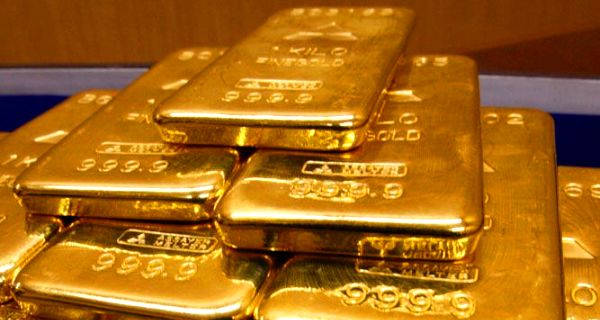 India’s demand for gold nearly doubled since the financial crisis of 2008-09, notwithstanding the sharp rise in the price of the metal. From about 580 tonne in the form of jewellery, bars and coins in calendar 2009, consumer demand jumped to about 1,000 tonne the following year. Elevated prices ensured temporary moderation in 2011 but with gold easing globally in the last quarter of 2012, demand has begun to climb further.

So, to make the yellow metal expensive and temper consumer demand, the government increased the import duty on gold from 4% to 6% earlier this year. It was the second time during the current financial year that the government had hiked duties, the last being Budget 2012-13 when the tariff was doubled from 2% to 4%.

The government’s primary concern, says IndiaSpend contributor Tina Edwin, is to stop the continuing deterioration of its balance of trade, which is leading to worsening of current account deficit (CAD).

A brief explanation: balance of trade is the difference between merchandise exports and imports. Since India spends more foreign exchange on imports than it earns from exports, this balance is negative. Current account deficit arises when the combined outflow on (a) trade in goods and services, (b) income on foreign investments and salaries earned from overseas; and (c) remittances by non-residents exceeds inflow.

The worry is that if the current account deteriorates rapidly when the long-term foreign inflow is muted, India may face a foreign exchange crisis like the one in 1991 when it had just enough reserves to finance three weeks of imports. Deteriorating CAD would also mean the Reserve Bank of India (RBI) will continue to go slow on monetary easing, hurting both consumption and investment growth.

Back to the gold story: The combined impact of the duty increase in the last Budget and elevated prices was short-lived. As soon as prices eased a bit, demand for both jewellery and investment rebounded. So much so that demand in October-December 2012, the traditional festival-marriage season, soared 41%. It may be argued that the growth was on a low base. Consumer demand had shrunk when gold prices climbed in the second half of 2011 to Rs 32,000 per 10 gram. The sharp spurt in demand during late 2012 is being attributed partly to the much anticipated rise in import duties. “Festival and wedding-related purchases were supplemented by stock-building within the trade ahead of a widely-anticipated increase in import tax,” World Gold Council says in its latest report on Gold Demand Trends. 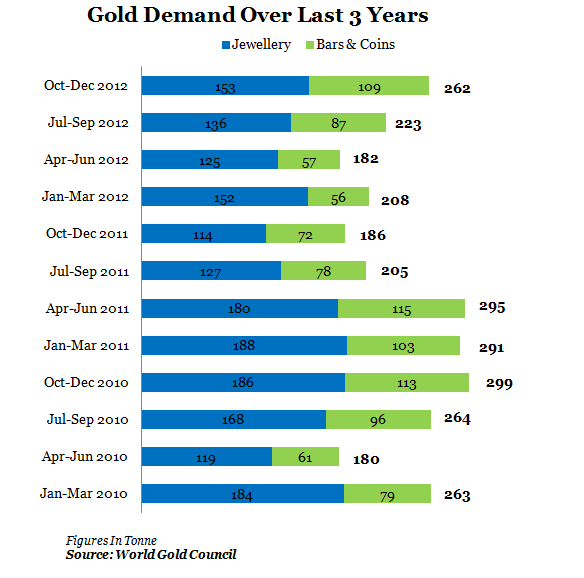 Most of the gold consumed in India is imported as the country has almost no ore deposits and recycling of gold is limited. The gold import bill is climbing once again, and that means heaps of precious foreign exchange is being spent on a commodity that contributes little to productive activity necessary for economic growth.

Gold is seen as an idle investment, kept in safes and bank lockers by individuals. In contrast, imports of capital goods lead to value addition in the economy – converting raw and basic materials into intermediate or final products. Crude oil, which accounts for more than 30% of the import bill and is the single largest import in value, largely serves as the engine of growth as it is used for generating power, running pump-sets to irrigate farms and for transportation. 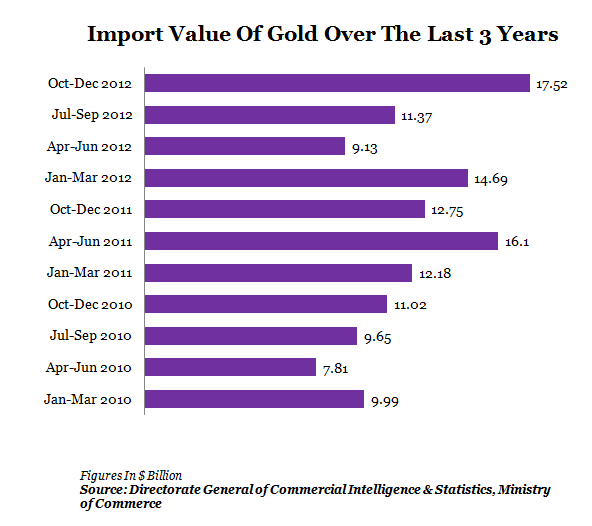 In the nine months to December 2012, India has already spent over $38 billion on importing gold. That is over 10% of merchandise imports of $365 billion. Although the import bill for gold was about 9% lower in April-December 2012 than a year ago, thanks to softening of international prices, it is a cause for worry as forex inflows are under pressure.

The impact of the large gold import bill is visible in the widening trade deficit and the current account deficit. Had India not imported any gold or re-exported it, which is in the realm of the impossible, trade deficit would have been narrower by $33 billion. India exported gold worth about $5 billion during the same period.

Any softening of demand for gold is good for reducing the value of imports. Since trade balance is one of the components of current account balance, India’s deficit on current account, too, would have been that much lower. Trade deficit for the current year to December 2012 widened from $147.2 billion to $167.2 billion at the end of January 2013.

So, how serious is the impact of Indians’ insatiable demand for gold on the country’s foreign exchange position? The current account balance for the quarter ended December 2012 is yet to be compiled by the Reserve Bank of India. At the end of September, CAD had reached $38.7 billion, a historic high of 5.4% of GDP. The RBI, in its quarterly report (Macroeconomic and Monetary Developments Third Quarter Review 2012-13), this January warned: “India’s current account deficit increased further in Q2 of 2012-13, mainly due to the worsening trade deficit, decelerated growth in net export of services and higher outflows under primary income. The CAD-GDP ratio at 5.4% is not only unsustainable but is also the highest-ever peak level. Early indications are that in Q3 of 2012-13, CAD as a percentage of GDP may increase further from this peak.” 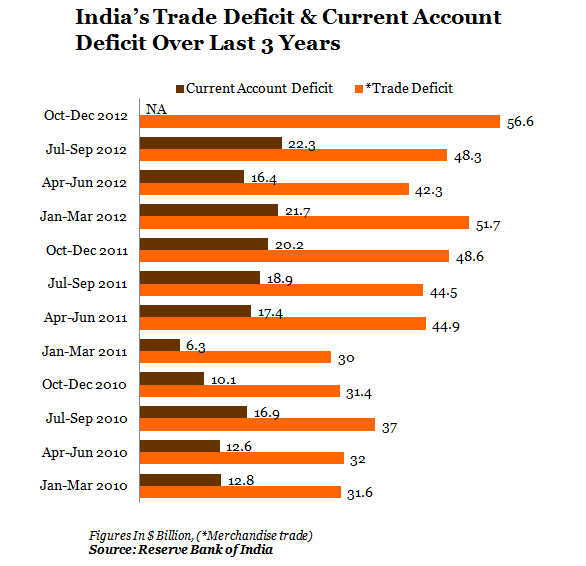 Gold imports may not have caused too much concern had exports of goods and services, net earnings from investments and remittances been buoyant. But merchandise exports declined over 6% in April 2012-January 2013 from a year ago. Net income from service exports declined more than 2% in April-September 2012, according to RBI data. Net income from investments continued to deteriorate in the first half as more money went out of the country in the form of dividend, interest and royalty than it came in. The only bright spot was a small increase in remittances sent by Indians working overseas.

What Will Chidambaram Do?

World Gold Council estimates that the consumer demand in India may climb about 12% to 965 tonne in 2013. That, together with slow recovery of global economy and trade, would mean that the current account would remain under pressure, a warning RBI sounded in its quarterly review in January. A high CAD will prevent the rupee from appreciating, and a weak rupee would mean expensive imports…. and that would exert upward pressure on inflation.

Clearly, the challenge to wean Indians off gold looks tough. A report of the RBI working group to study issues related to gold imports and gold loan NBFCs in February says: “As of now, there appears to be no close substitute to wean away investors’ attention from gold in terms of returns, liquidity and ease of undertaking operations. The policy challenge is to invent and introduce at least a few efficient alternatives sooner than later while ensuring continued price stability and macroeconomic stability.”

Other than the modulated increase in import duties and curbs on quantities that may be imported, the group suggests introducing new gold-backed financial products to reduce the demand for physical gold. The products proposed include:

1) Modified Gold Deposit Scheme - Gold taken as a deposit is recycled for meeting domestic demand and given back at the time of maturity;

2) Gold Accumulation Plan - A saving plan catering to even small buyers of gold in which imports are deferred till the time of actual delivery;

3) Gold Linked Account - Entire transaction takes place outside India and import of gold is not involved; and

4) Gold Pension Product - Customer surrenders gold to the bank on an agreement to receive streams of monthly pension till his death. 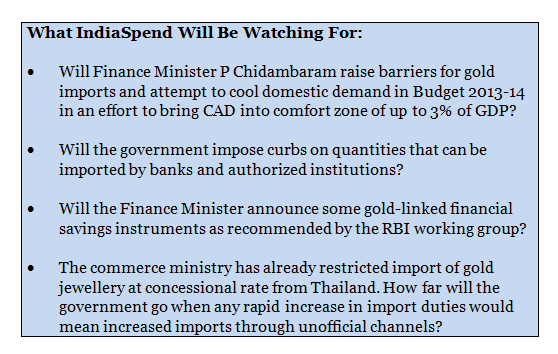