India's Wealth Is Rising. So Is Inequality 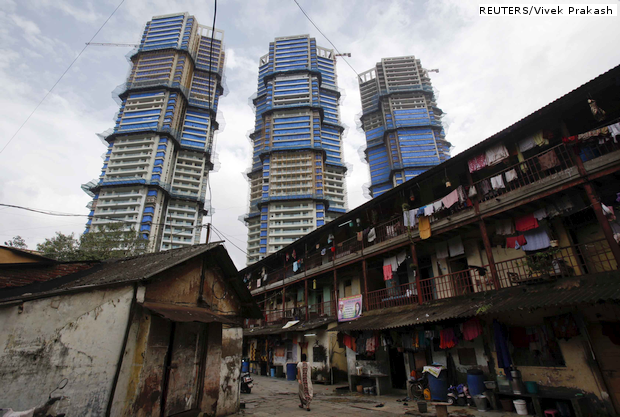 “Worldwide, inequality of individual wealth is extreme. At the start of 2014, Oxfam calculated that the richest 85 people on the planet owned as much as the poorest half of humanity. Between March 2013 and March 2014, these 85 people grew $668 million richer each day.”

That is the observation by Oxfam India, an NGO that works on issues relating to poverty and development, in its latest report on inequality across the world.

The situation is no different in India.

According to a study by the Asian Development Bank, the Gini coefficient (a widely-used measure of inequality; the higher the value, higher the income gap) has worsened in India between 1993 and 2009-10 going up from 33 to 37.

Data on household consumption expenditure, collected by National Sample survey Office (NSSO) under the Ministry of Programme Implementation, could be used as a proxy to analyse income inequality. The table below shows the difference between rural and urban income from 2004-05 to 2011-12.

The story is similar in urban areas.

Social protection is a cushion for those at the bottom against the effects of inequality. Social protection policies play an important role in reducing poverty and inequality and supporting inclusive growth by boosting human capital and productivity, supporting domestic demand and helping transform national economies.

According to a report by the International Labour Organisation (ILO), only 27% of the global population enjoys access to comprehensive social security systems whereas 73% are covered only partially or not at all.

India does badly on this count.

Now let us look at the central and state-level spending on social protection in India.

Education takes the major share, followed by health and family welfare. Spending as a percentage of GDP on social security and welfare has increased from 0.25% in 1995-96 to 0.59% in 2010-11. This is due to the introduction of labour-related schemes, such as the Mahatma Gandhi National Rural Employment Guarantee Act (MGNREGA) and health insurance schemes like Rashtriya Swastha Bima Yojana (RSBY).

Let us now look at the beneficiaries of social protection schemes in India.

The old-age pension scheme benefits nearly one in four people above 60 years of age. The unemployed have a lot to worry, since only 3% receive benefits. Other schemes, such as social insurance and health coverage, totter along.

The 12th Plan document has mentioned that social-protection spending needs to increase to 4.37% of the centre’s GDP annually to increase the coverage of these schemes. UNESCO, meanwhile, has suggested that the government widen and deepen the tax base, review tax rates and exemptions, and ensure better tax administration and tax compliance to fund social protection programmes.

With inequality rising, the government might need to spend more on social-protection programmes, but with limited resources and a rising fiscal deficit, this will not be easy.