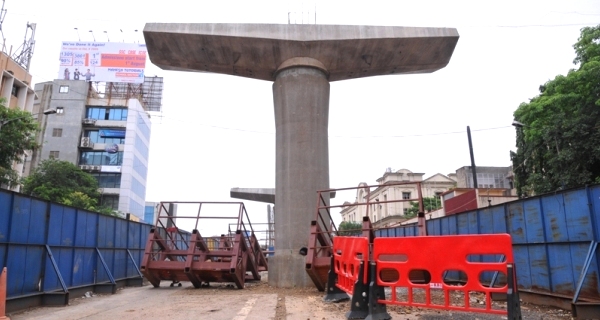 A Planning Commission member - Arun Maira - recently referred to the Rs 66,000 crore Jawaharlal Nehru National Urban Renewal Mission (JNNURM) as a success. He was speaking in his specific capacity as Head, Steering Committee set up to appraise the JNNURM by the Planning Commission.

IndiaSpend’s Prachi Salve finds that the Government’s own reports suggest that while the Mission has been a relative (and even considerable) success in states like Gujarat and Maharashtra, in most parts of the country the initiative has lagged. A significant reason for this that most states are weak in planning and executing projects for which funding is on offer.

Some 60 percent of JNNURM’s funds have been spent so far. In terms of execution, only 18 % of projects under the key Urban Infrastructure and Governance (UIG) vertical (for which the appraisal reports are available) have been completed. The following table shows in detail, the number of states and the approved projects as well as the sanctioned costs.

Table 1: No of Approved JNNURM Projects

Name of the State

Interestingly, some 21 states have not completed a single JNNURM project. There are 92 such projects costing Rs 872 crore. It can be seen from the table that most of the states are small with their cities falling under category B and C. Moreover, despite making special provisions in the budget of the mission for the North Eastern states and the state of Jammu &Kashmir, these states are still lagging behind.

Table 2 shows the states who have managed to complete some projects. Again, the pace is slow. Of the 140 approved projects, only 20 have been completed. These states at least have one city in the category A. For example out of the 13 projects completed in West Bengal, 11 are in Kolkata.

The state of Delhi would come as a surprise since most visitors to the city would argue that visible infrastructure addition is one of the highest for any Indian city. And yet, of 23 projects approved, only 4 have been completed.

The reported reasons for the delays are governance issues (especially between the State Government and Municipal Corporation of Delhi or MCD), inability to meet the reforms criteria and finally late submissions of the detailed project reports. Delhi also had many ongoing infrastructure projects in the run up to the Common Wealth Games (CWG). Bringing about a convergence between the JNNURM and these projects could not happen.

Table 2: No of Completed JNNURM Projects

The majority of the projects in Gujarat were related to flyovers with nearly 21 of 72 projects. In case of Maharashtra, water supply related projects were the main recipients with nearly 24 out of the 80 projects. The Category A city of Ahmedabad and a Category B city of Nagpur were among the top performing cities in these states with 19 out of 26 and 5 out 17 projects respectively.

So what are the broad reasons for the JNNURM not being as successful as believed:

a) The funds allocated for states with cities falling under Category B and Category C is very less.

b) Most projects were sanctioned or even sent for approval only after 2007 while the Mission was started in 2005. One reason is the primers and toolkits were not provided by the Ministry of Urban Development (MoUD) to states and Urban Local Bodies (ULBs) which in turn led to delays in the preparation of the Detailed Project Reports (DPRs).

This further led to difficulties in execution of the projects at a ground level. Moreover, citizen consultations and stakeholder involvement was not sufficient in many cases.

c) This is an important one and perhaps one of the big challenges going ahead. States with past experience of implementing large urban infrastructure projects with multilateral agencies responded immediately to the mission and availed of its benefits. This helped them move faster in preparation and implementation of the projects under JNNURM.

While states like Gujarat and Maharashtra would lead the urban infrastructure build, it’s not clear how the 21 laggard states and their towns would accelerate their efforts, if they do.

The Government has acknowledged that there would be many learnings from the JNNURM Phase I effort. Most of which will be applied to the Rs 175,000 crore (likely) JNNURM – Phase II which is set to launch in a few months.

It stands to reason that the JNNURM is a reasonable proxy for a state or town’s capability to build out infrastructure within reasonable time and cost. This means that these states, cities and towns may not do much better with their own, self-initiated projects. There are exceptions of course, like Delhi.

The consequences of this go beyond just an infrastructure gap and onto the larger problems of managing the big city – small city divide. In addition to of course managing the urban-rural divide. Possibly JNNURM Phase II will manage the challenges better.