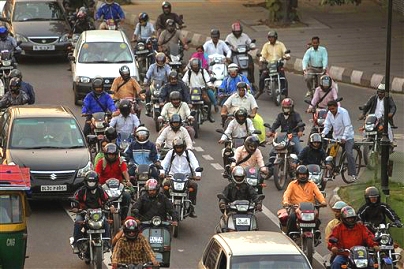 India’s road network has grown at an annual rate of 4% since 1951 but the number of vehicles has increased nearly 11%, choking roads and increasing pollution. IndiaSpend’s Prachi Salve looks at data for the last six decades and comes up with some interesting findings:

India has the second largest road network in the world with 4.2 million km. The road network accounted for 85% of the total passenger movement and nearly 63% of the freight movement during 2009-10.

Interestingly, even though the increase in road length has kept pace with the rising population, it has not managed to keep pace with the increasing number of motor vehicles. The two tables below show the compound annual growth rates for vehicles and roads.

The number of registered motor vehicles witnessed a compounded annual growth rate of 9.9% during 2001-2011 when compared with the road network, which increased at a CAGR of 3.4%.

Table 1: Vehicles Increasing On The Streets

*Others include tractors, trailers, three wheelers (passenger vehicles)/LMV and other miscellaneous vehicles which are not separately classified.

The sharp rise in the number of two-wheelers shows the impact of rising income, which, in turn, leads to increasing need for mobility. It also shows the impact of easing supply side constraints (delicensing of the automobile sector leading to the entry of vehicle manufacturers, lifting of quantitative restrictions etc.) and easy access to finance.

In contrast, the slower growth of goods vehicles shows the shifting of economy from commodity-producing sectors (agriculture and industry) towards services. However, this will create, or is creating, problems of congestion and pollution.

Four states constitute almost 46% of the total vehicle registrations in the country. Maharashtra has the highest number of vehicles registered until March 2009 with 14% (14.5 million) followed by Tamil Nadu with 12% (12.9 million), and Gujarat and UP with 10% each.

Name of the State

Now let us look at the cities. Delhi has highest number vehicles at 6.3 million. Ahmedabad and Chennai also feature prominently with 1.7 million and 2.9 million, respectively. Another interesting fact is that metros account for only 27% of the total number of vehicle registrations.

Name of the City

In general, the state of India’s road infrastructure is obviously linked to many other problems like high rate of highway accidents. Better road infrastructure also means easier movement of goods. Keeping pace with increasing number of vehicles on the roads and the aspirations that go with their acquisitions will be a big challenge in years to come.