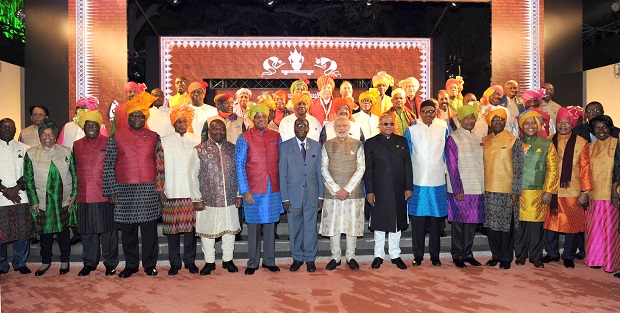 “Africa and India are the two bright spots of hope and opportunities in the global economy,” Prime Minister Modi said during the inaugural ceremony of the recently concluded India-Africa Forum Summit (IAFS).

Why Engagement With Africa Matters to India

Africa is of strategic importance to India in terms of economic and commercial engagement in addition to security and defence cooperation.

The continent is rich and abundant in natural and mineral resources with many regions yet to be explored.

It is the second-most populous (1.2 billion people) continent in the world and the second-fastest growing economic region after Asia.

The annual average income of Africans is growing at almost twice the global average rate. The net wealth per adult in Africa increased 56% from $2,916 in 2000 to $4,536 in 2015, according to Credit Suisse Global Wealth Report 2015.

It is important to note that crude oil is Africa’s single-largest exported product in terms of value. India’s major imports from the region include crude petroleum products, edible fruits and precious stones.

West Africa is the most important region in terms of trade, contributing almost 38% of total African trade ($27 billion) in 2014-15.

It is India’s largest trading region in Africa with 22 nations, including major trading partners such as Nigeria ($14 billion) and Ghana ($1 billion).

The Southern African Customs Union ($13 billion) is the second-largest trading region, with an 18% share of African trade. The important trading nations from this region include South Africa and Botswana.

Nigeria is India’s largest trading partner in Africa with a total trade worth $16 billion in 2014-15. The country is important to India in terms of crude oil and energy security.

India imports nearly 8-12% of its crude requirements from Nigeria. India imported mineral fuels and oils worth $14 billion during 2014-15.

The top five countries account for 58% of bilateral trade with the African continent.

Eastern Africa was the largest recipient of Indian FDI in 2014, valued at $5 billion. It is assumed that most of these investments flow through Mauritius as FDI to Africa.

India announced a new line of credit to Mauritius worth $500 million in March 2015 for civilian infrastructure projects.

India assured additional concessional credit of $10 billion over the next five years to strengthen partnership with African nations during the recently concluded IAFS summit. India will also offer grants of $600 million, which will include an India-Africa Development Fund of $100 million and an India-Africa Health Fund of $10 million.

India’s initiative to build ties with African nations is seen by many as a counter to China’s dominance in the region.