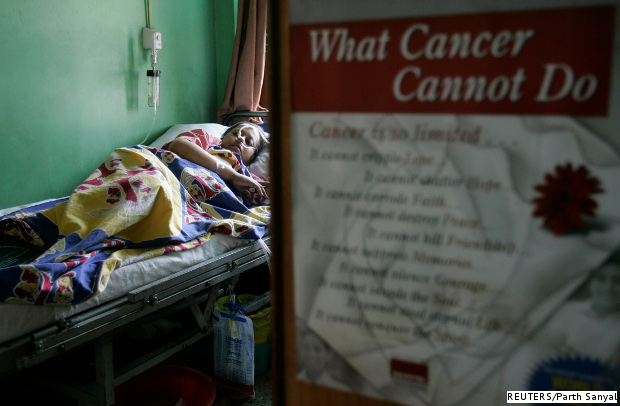 A cancer patient getting treatment in a hospital in Kolkata.

The shift from infectious diseases as a leading cause of death to non-infectious illnesses is the story of every country treading the path of development. Far from being an exception—as an IndiaSpend exploration of four such diseases linked to changing lifestyles will detail, starting tomorrow—India is on a greatly accelerated journey of “epidemiological transition,” the process of changes in patterns of disease as societies develop.

With growth and prosperity, a turning tide of disease

The incidence of non-communicable diseases in India soared over the last two decades, a period of unprecedented economic growth, urbanisation and prosperity, studies show.

These data indicate the pace of growth of non-communicable disease between 1995 and 2004:

By 2012, cardiovascular diseases made up a fourth of all deaths in India. Chronic respiratory diseases accounted for 13%, cancers for 7%, diabetes for 2% and all the other non-communicable diseases for another 12%.

Sources: WHO; Ministry of Home Affairs

Cases of cancer are rising across the country but Bengaluru, in particular, is seeing a cancer explosion driven by fast-changing lifestyles, among other reasons, Dr B Ajaikumar, chairman of HCG Cancer Hospital, a leading cancer-care institution, has said.

Preponderance of various cancers and lifestyle diseases – diabetes, hypertension among young and old

Parkinson’s, Alzheimer’s cases, not many cases of cancer among patients in Delhi

Non-communicable diseases now account for three-fourths of all deaths in the USA and other high-income nations. In the West, epidemiological transition shadowed the development of medicine and the creation of welfare states through the 20th century.

“It has taken the developed world a century to complete the transition,” said Nata Menabde, WHO Representative to India.

India embarked on epidemiological transition only in 1970, moving into top gear after 1995—sooner than expected because of rapid urbanisation, industrialisation and fast-paced socio-economic development.

Abdel Omran, an American medical professor who in 1971 first coined the term “epidemiological transition”, listed three ages to the changeover: The “Age of Pestilence and Famine”; the “Age of Receding Pandemics,” as large-scale killer epidemics become fewer; and, as development picks up pace, the “Age of Degenerative and Manmade Diseases.”

Why India is worse off than the West

Until 1900, the top 10 causes of death in the USA, a bellwether for the developed world, were infectious diseases. The average American lived for 48 years (life expectancy is 79 years today). No matter where you lived—USA, India or Timbuktoo—life hung by a hair.

Then, medicine started to evolve, and Western nations provided better health facilities, sanitation and higher living standards. By 1950, the average American could expect to live till 68—and die of a new breed of killer diseases the WHO branded non-communicable, illnesses that aren’t caused by an identifiable agent and as such, aren’t contagious.

India’s problem is not just that the transition to these diseases is occurring almost overnight in medical terms. It is that a country with a crumbling health system must deal with the old diseases and the new.

While the troika of smallpox, plague, and malaria ruled until the 1960s, by the mid-1990s, other communicable diseases such as tuberculosis of lungs, gastroenteritis/dysentery, and pneumonia had taken centrestage.

Elderly Indians are particularly at risk. “Mumbai’s elderly suffer because their diseases aren’t managed as they should be, for want of support,” Meena Ganesh, CEO and managing director of Portea Medical. “Close to three-fourths of our customer base is above 60 years of age.”

Old people in India can expect to suffer from chronic non-communicable diseases and contract an infectious illness, said Perianayagam Arokiasamy, professor at the International Institute for Population Studies, Mumbai.

The costs of staying alive longer

Breast cancer is increasingly striking Indians at an earlier age. In Bengaluru, the “normal” age of being detected with the disease has fallen from between 45 and 55 years a decade ago, to between 35 and 45.

That is the case with many non-communicable diseases, adversely impacting the productivity of the working population and increasing the probability of premature death.

“A 30-year-old Indian has a one-fourth probability of dying prematurely, before turning 70, from these diseases,” said the WHO’s Menabde.

Researchers Prabhat Jha and Son Nguyen show that 18% of all Indians can expect to die before the age of 40 years versus only 2% of UK residents. More pointedly, they label such premature deaths avoidable.

Mortality transition has widespread and expensive implications for India. When communicable diseases used to consume humanity, death would come suddenly and swiftly.

Life and health would putter along. Then illness would hit and “the bottom would drop out like a trap door”, as physician and author Atul Gawande describes it in his bestselling book Being Mortal.

Post the epidemiological shift, life fades out gradually as the weight of chronic non-communicable diseases increasingly overwhelms the body. But, travelling down that long road can be expensive.

Indians particularly feel the pinch because the country’s primary health care system is not equipped to deal with the non-communicable diseases epidemic, leaving people at the mercy of expensive private-health facilities.

Most non-communicable diseases are chronic--of long duration and slow progression. They are likely to call for “catastrophic expenditure”, categorised as out-of-pocket expenses exceeding 40% of a family’s non-food consumption expenditure.

Cardiovascular diseases, endocrine and metabolic disorders, neoplasms (cancers), respiratory diseases and mental health and neurological disorders account for 39% of India’s health expenditure. Add other non-communicable diseases and, together, they account for 48% of health spending.

Research shows a fourth of families with a member with cardiovascular disease incur catastrophic expenditure.

Cancer is 160% more likely to necessitate catastrophic expenditure for an acute condition than a communicable disease. About a fourth of the families with a member suffering from cancer are driven to poverty.

So debilitating is the impact of major diseases that doctors tend to treat patients depending on what they can afford. Poor people are less likely to be prescribed expensive treatments—interventions as well as drugs.

A nationwide study spanning 50 cities and 20,937 patients found that more poor people died of cardiovascular disease than rich patients—no surprises there. But, only 0.7% of poor patients were prescribed coronary artery bypass graft surgery, versus 7.5% of the rich ones.

So, economic development has set epidemiological transition in motion in India, but has, so far, failed to give Indians the kind of healthcare that the West—and many parts of the emerging world—have experienced.

India’s lack of attention to lowering the burden of non-communicable diseases is particularly damaging because most chronic diseases are preventable.

“About 80% of diabetes and stroke is preventable. About 30 to 40% of all cancers are preventable,” said J S Thakur, professor of community medicine, Post Graduate Institute of Medical Education and Research, Chandigarh.

But preventive measures are not a major focus of health policy.

We focus only on curative healthcare interventions. Instead, we should also be focusing on prevention and control, cautioned Arokiasmy.

“We are relying on treating our way out of non communicable diseases, which isn’t efficient,” agreed Thakur.

Health promotion and behavioural changes—at the level of the individual and the community—are better approaches.

“Tobacco use, harmful use of alcohol, physical inactivity and food high in saturated fats, trans-fats, salt and sugar, especially sweetened drinks, contribute to more than two-thirds of all major non-communicable diseases,” said the WHO’s Menabde.

Jha attributed the rapid transition to so-called lifestyle disorders in developing countries in general, and in India in particular, to changed eating habits and increasingly sedentary lifestyles.

Epidemiological transition is inevitable, but you don’t have to put yourself into the jaws of slow and expensive death. As we shall see over the next four days, there is a lot that is up to one person—you. ¦