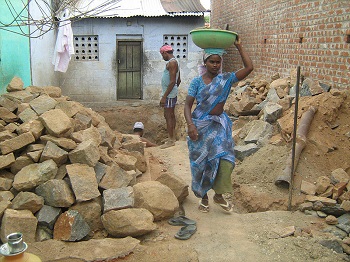 India hosts one of the largest social security providers in the world that had an investment corpus of Rs 546,082 crore ($88 billion) at the end of the last financial year.

The questions might be: what’s the flow of funds been like in recent years ? How efficiently is the money being managed ? Most importantly, does it reach the people who need it the most ? Remember, only 7% of or so of India’s workforce is in the organised sector.

There are only some answers to these questions though ask we must, we felt.

A little bit of background first. The Employees Provident Fund Organisation (EPFO) has 19,828 employees and 85 million member-accounts at the end of March 31, 2012 and is run by a Central Board of Trustees (CBT) chaired by the Union Minister for Labour & Employment.

Let us now look at the inflows: EPFO received Rs 70,889 crore as contribution in 2011-12 under the following categories. Read on for earlier years: 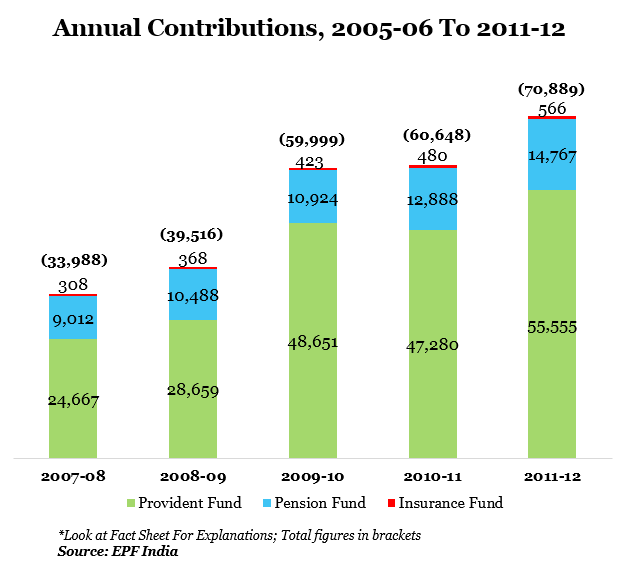 Rising incomes have seen contributions to EPFO increase every year including the periods when GDP growth slowed down from the 9% level hit in 2006-07. 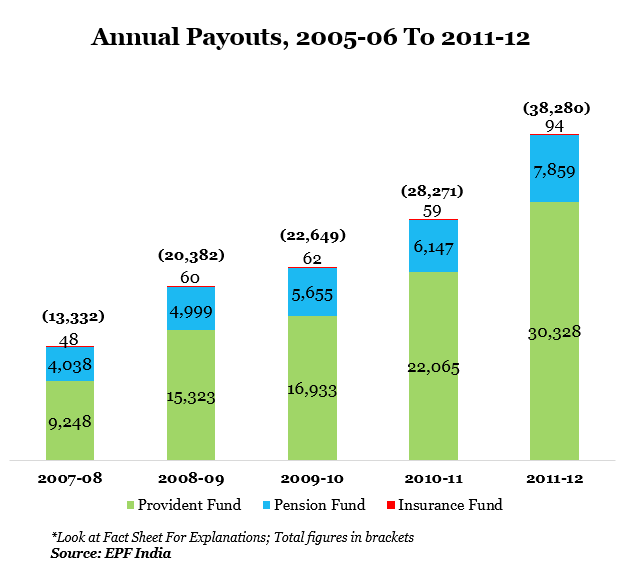 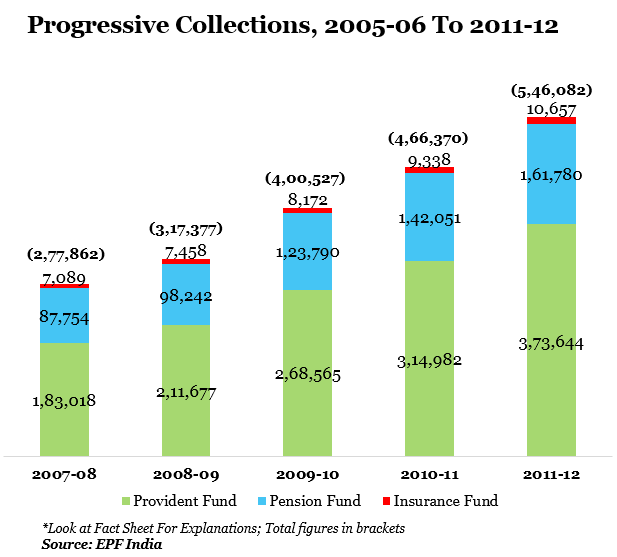 Importantly, where are the funds going ? The EPFO parked over 32% of its invested funds in 2012 in public sector financial institutions followed by central Government bonds (24%). It is also invested heavily in state Government securities (14%) and public accounts (15%). 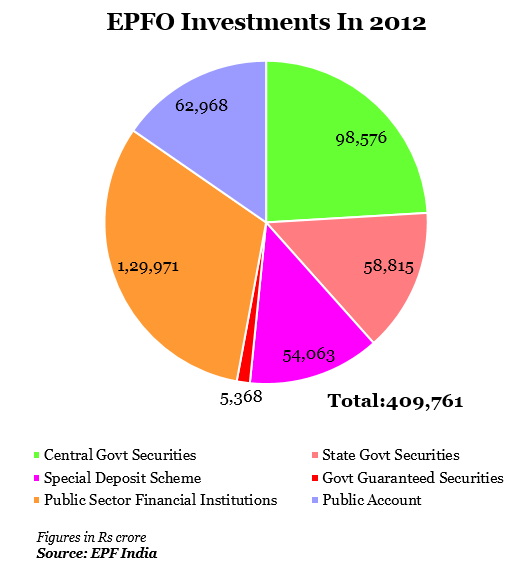 The EPFO is technically under-staffed. Against an approved staff strength of 25,091, the EPFO had an employee strength of 19,828 – a vacancy of over 5,000 positions.

To manage and pay for its existing staff, among other running costs, EPFO collected Rs 2,484 crore as administration charges in 2011-12, an increase of 22% from Rs 2,035 crore collected in 2010-11. And the organisation reported profit (excess of income over expenditure) of Rs 1,783 crore last year.

Now what’s wrong (or right) with the EPFO or the way its managed or what’s right ? We spoke to two persons, both associated with the EPFO but with somewhat differing views.

Sharad Patil, Secretary General, Employers’ Federation of India and a member of the Board of Trustees feels the main issue is the size of the fund and the fact that it is run by the Government.

“Settlements have improved but implementation of information technology is a challenge,” he says.

The question to frame however, he says, is not who is in the EPFO net but who is out of it ?

“A large number of employees are out of the EPFO, e.g. construction workers. These large numbers of migrant workers cannot be tracked without the help of technology. And even if money is being deducted by the employers – such as contractors - workers may not be getting it because of their constant movements,” he says.

Baijnath Rai, General Secretary of the labour union Bharatiya Mazdoor Sangh and a former CBT member feels the Government is pushing for privatisation of the fund. “So many of our suggestions go unimplemented,” he complains.

According to Rai, the Government is not implementing the pension system properly, claiming losses. “Look at the numbers. The EPS had reported a loss of Rs 50,000 crore but the Government itself now claims that the loss has come down to Rs 10,000 crore. So, the losses can be wiped out and it can be run efficiently.”

Patil sticks to his stance that implementation can be better. “But the will to implement ideas is important too. Second, a fund of such a size needs steady leadership. There are frequent changes among ministers, secretary level bureaucrats and even the PF commissioner level,” he points out.

And then there are views, not new, on where or how the funds should be invested. Rai bemoans the fact that the Government is keen on investing EPFO funds in the private sector. “We are not against the move but what is the guarantee that the money will be safe and we will get returns on it?” But adds that all he is asking for is safety of money and good enough returns.

Patil adds that the fund can pay workers good pension if the payouts at retirement are not split into different categories. “My suggestion would be to pay 30-40% of the corpus as one-time benefit to the worker and park the remaining 60-70% in pension funds so that they can get a decent amount as pension. Personal financial planning is always a tough challenge... this could probably address the issue of steady income.”

An earlier IndiaSpend report looked at the issue of youth and employment... as most of us know, India’s median population is 25 years of age today. Currently, 8 working people support one senior citizen. But this number could change sharply by 2050, when 3 working people will have to support 1 senior citizen. So, one larger question could be: how well is the youth of today geared to support an ageing population of tomorrow?

* EPFO is one of the world’s biggest social security providers in terms of volumes.

* Employers and employees both contribute @ 12% of wages in contribution accounts of EPFO. Employers also contribute towards administration of the benefits under the Act.

* Three core areas of EPFO are provisioning of provident funds, pension and insurance.

* Provident fund is a defined contribution scheme where both the employees and the employers contribute their mandated share.

* A mix of “defined contribution” and “defined benefit” forms the pension scheme. The employees do not have to contribute to this scheme.

* Insurance Scheme is a deposit-linked scheme that provides for benefits up to Rs 1,30,000/- without any contribution from employees.