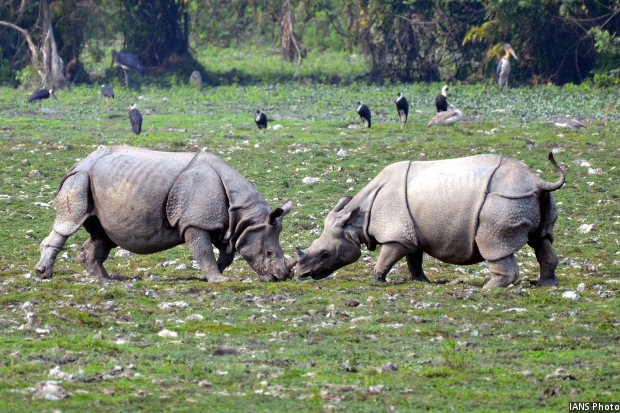 While everybody knows of India's efforts and struggles to conserve the tiger, here's one of India's most successful conservation stories: From a population of barely 75 in 1905, there were over 2,700 Indian rhinos (Rhinoceros unicornis) by 2012, according to the World Wide Fund for Nature–India (WWF-India), a global wildlife advocacy.

Rhinos are mega-herbivores, part of a small and disappearing group of large herbivores that weigh over 1,000 kilograms and include the elephant and the hippopotamus. These large herbivores are shapers of their landscape and environment, and the rhino may well be a keystone species, according to 2014 research conducted in South Africa's Kruger National Park.

By eating only certain kinds of grass--and trampling dense vegetation--rhinos indirectly affect smaller herbivores in their area, according to another study, creating a cascade of effects that, in turn, affects other species, from tigers to birds.

The Indian rhinoceros is also known to help in seed dispersion, moving large tree seeds from forested areas to grasslands through excreta.

The Indian rhino was moved from its status of endangered (since 1986) to vulnerable in 2008 by the International Union for Conservation of Nature (IUCN). This was after a survey in 2007 by the IUCN Asian Rhino Specialist Group, which estimated that there were close to 2,575 one-horned rhinos in the wild, spread across parts of India and Nepal, with India being home to 2,200 rhinos, or over 85% of the population.

The habitat of the Indian rhino once extended from Pakistan into northern India and modern-day Myanmar, reaching into Nepal, Bangladesh and Bhutan. However, loss of large tracts of habitat and extensive poaching for its horn--believed to have medicinal and aphrodisiacal properties--led to its extinction in all these countries, except India and Nepal.

By the 1900s, only between 100 and 200 rhinos survived in the wild. From there to its current population of approximately 3,500 is a remarkable turnaround, according to the International Rhino Foundation.

In India, rhinos can now be found in parts of Uttar Pradesh, West Bengal and Assam. In 2012, more than 91% of Indian rhinos lived in Assam, according to WWF-India data.

Within Assam, rhinos are concentrated within Kaziranga national park, with a few in Pobitara wildlife sanctuary. Kaziranga is home to more than 91% of Assam's rhinos--and more than 80% of India's count--with a 2015 population census by Kaziranga park authorities revealing 2,401 rhinos within the park.

Data shared by World Wide Fund for Nature–India, via email

Poaching down, but conflict in the region hampers tracking of horns

A rhino horn could fetch as much as $60,000 per pound in the contraband market in 2015, largely in countries such as China and Vietnam, according to this May 2015 report in The Washington Times.

Although rhino poaching peaked in India in 2013, when 41 of the herbivores were killed, it has declined since, largely because of better policing and protection by the Assam government and non-governmental organisations (NGOs), according to Tito Joseph, programme manager of the anti-poaching programme at the Wildlife Protection Society of India, an NGO.

But outside the park, transport of poached horns is not adequately tracked, said Joseph, a key factor being regional insurgency. During the 1980s and 1990s, poachers exploited the destruction of park infrastructure during conflicts and killed almost the entire population of rhinos in many of Assam's protected areas, such as Manas, Laokhowa and Burachapori.

The need for translocation: Solitary Rhinos are out of room

Rhinos are solitary creatures. Each consumes almost 40 kg of vegetation a day. However, within parks of Assam with large rhino population, animals have been seen in groups which is an indication of lack of space. These observations are coupled with increasing fights for dominance among rhinos, a competition for available space.

According to some estimates, based on observation, the threshold population of Kaziranga is estimated at 2,500, while Pabitora's threshold is 100.

Exceeding carrying capacity also means that the rhinos are more likely to venture out of protected areas, which increases chances of human-animal conflict. 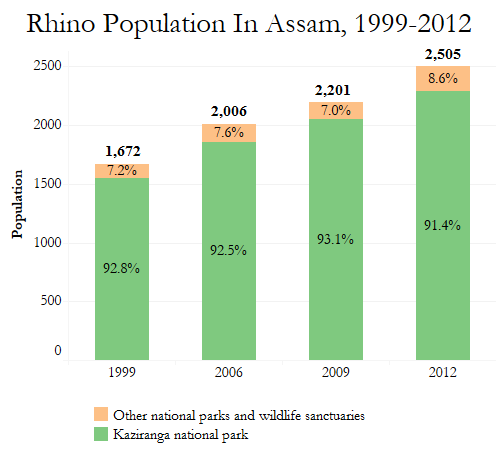 So, rhinos need to move to ecologically similar but distant areas to ensure species survival, according to the Indian Rhino Vision 2020 programme (IRV2020), a collaborative effort between various organisations, including the International Rhino Foundation, Assam's forest department, Bodoland Territorial Council, WWF-India, and the US Fish and Wildlife Service.

The first successful attempt to move rhinos out of Assam and re-introduce them into a similar habitat was made in 1984 in Uttar Pradesh's Dudhwa national park, which has 33 rhinos today.

"We have already added one area as a rhino-protected area, and it is likely that we will add two more by 2020," said Amit Sharma, senior coordinator of the rhino conservation programme at WWF–India. "The present population trend shows that population growth is healthy, and achieving the target of 3,000 rhinos in the wild is very much possible."

While poaching is well-documented within these areas, health issues and diseases in rhinos need further study, said Sharma. Habitat loss is not a concern at present, since rhinos live in isolated pockets. But climate change and invasive species may create new stresses, he added.

As many as 22 rhinos died this year due to monsoon flooding in Assam. After poaching in Manas and the death of a mother and calf in Burahapori, translocations to both places were halted.