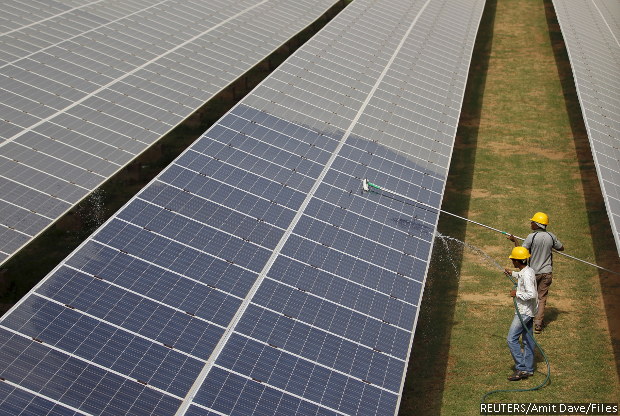 A week after US President Donald Trump accused India--falsely, as Factchecker reported on June 2, 2017--of being free to add as many coal-fired power plants that it wanted, a new global report has recognised India’s effort to increase the role of renewables in its energy mix.

India now accounts for 5% of the world’s renewable-energy capacity, and the country invested a record $9.7 billion (Rs 64,990 crore)--the cost of building 11 new coal-fired plants of 1,000 MW capacity--in renewable energy installations during 2016, according to the Renewables Global Status Report 2017, released on June 7, 2017.

It costs roughly Rs 6 crore per megawatt (MW) to build a 1,000 MW coal-fired power plant, according to this 2012 report by the Central Electricity Regulatory Commission.*

So, here is our calculation:

**Calculations are approximate and are not adjusted to account for cost escalations since 2011.

India also ranked fifth globally in direct use of geothermal capacity and sixth in generation of electricity from biomass, and the renewables sector now employs 620,000 Indians, said the report, released by REN 21, an international non-profit working on renewable energy.

However, India is currently falling behind on its ambitious plan to increase renewable capacity.

In April 2016, Piyush Goyal, the power and renewable energy minister, reiterated that India’s solar power targets–100 GW by 2022–were achievable, according to this government press release, but an IndiaSpend analysis on January 7, 2017, shows that this expansion is challenged by weak infrastructure and a lack of cheap financing.

To achieve its targets, India must add 130.76 GW of renewable energy over the next six years, an average of 21.7 GW per year or, three times the capacity it added in 2016.

China leads the world in renewables, India no. 5

China leads the world with 28% of global renewable-power capacity, followed by the US, Germany, Japan and India. The data do not include hydropower because it remains the largest component of renewables capacity and can mast developments in other renewables technologies.

In 2016-17, India’s estimated peak electricity demand of 165.2 GW was lower than its installed capacity of over 300 GW. Coal-fired capacity of over 180 GW alone was higher than the peak demand, but the country continues to face acute power shortages due to coal supply problems, transmission and distribution losses and poor health of power utilities, IndiaSpend reported on April 29, 2017.

India has set a target of 175 GW of renewable energy by 2022. Renewables, nuclear and large hydroelectric power plants–will account for more than half (56.5%) of India’s installed power capacity over the next decade (to 2027), according to a draft of the third National Electricity Plan (NEP3) released in December 2016, IndiaSpend reported on April 19, 2017.

Tamil Nadu accounted for nearly 1.6 GW, more than any other state, followed by Rajasthan (1.3 GW) and Gujarat (1.1 GW). The report observed that demand for large-scale solar projects in India has been driven by rapidly falling prices combined with policy support nationally and in several since 2014.

At an auction in Rajasthan recently, power companies Phelan Energy and Avaada Power each offered to charge Rs 2.62 per kilowatt-hour (kWh) of electricity generated from solar panels, which is 40% lower than 2015’s lowest pricing of Rs 4.34 rupees per kWh, as the Guardian reported on May 10, 2017. The cost of coal fired electricity per KWh ranges from Rs 0.87 to Rs 5.29, IndiaSpend reported on May 29, 2015.

Another milestone towards PM @narendramodi's vision of clean affordable power for all: Bhadla Solar Park achieves tariff of Rs. 2.62/unit

“India’s rooftop solar market has expanded significantly in recent years but accounted for only about 10% of the country's solar PV capacity at the end of 2016 and financial, regulatory and logistical challenges have hindered growth, and India remains a long way from its rooftop target of 40 GW by 2022,” said the report.

In wind power, with a capacity of 28.7 GW in 2016, India ranked fourth in terms of new installations and total capacity. However, this increase was attributed to a rush to take advantage of incentives that were set to decline or expire in early 2017, the REN 21 report noted.

Solar and wind energy projects in India are expected to attract investments of $20 billion each year until 2018-19, according to the Indian Renewable Energy Development Agency, IndiaSpend reported on March 4, 2016.

Globally, the renewable energy sector employed 9.8 million people in 2016, of which India accounted for 0.62 million (6.3%), equivalent to the population of Sikkim and fourth-highest among all countries.

India needs $100 billion in asset financing for renewable energy over the next six years, according to this report from Bloomberg New Energy Finance (BNEF), a London-based energy consultancy.

Apart from China, India was the only Asian country with concentrated solar thermal power installations under construction by the end of 2016, the report said.

Correction: An earlier version of this story erroneously referred to Rajya Sabha as the parliament's lower house. We regret the error.