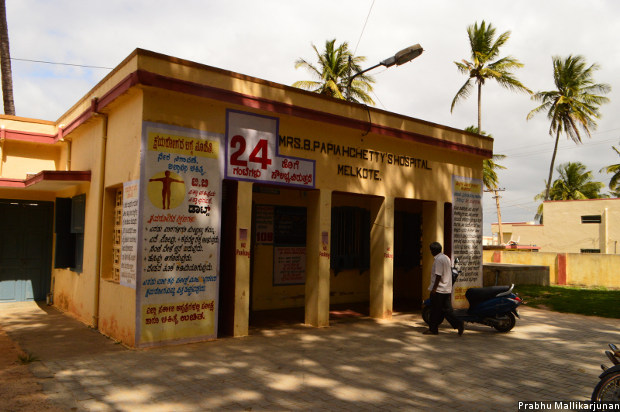 The primary health centre at Melkote, in Mandya district, Karnataka, has only one doctor--to serve 20,000 people across 33 villages. The number of medical colleges and seats have almost doubled in India over the past decade. But the doctor-patient ratio in even the most prosperous states, home to the majority of India's private medical colleges, is still way off the WHO requirement of 1:1,000.

Mandya: There is only one doctor at the primary health centre (PHC) in Melkote, in southern Karnataka, to serve 20,000 people across 33 villages. On Sunday, the doctor's weekly off, the usually crowded PHC is completely deserted.

Anyone who falls critically ill in Melkote on a Sunday has only one option--to take the ambulance parked at the PHC to the closest hospital 23 km away, in Pandavapura taluka subdivision.

For a decade now, Dr Harsha D has been treating every sick person in this rural pocket, commuting 120 km between the centre and his home in Mysuru. "I wish there was another hospital in the vicinity and more doctors too," he said.

Melkote is not some remote, poor village in an ailing state. It sits in Mandya district, just 100 km south-west of the state capital, Bengaluru. This is an agriculturally prosperous district with a literacy rate of 70.4%. Its per capita income of Rs 114,270 is well above national average of Rs 93,293. And 70% of its villages boast of a human development index above the state average of 0.4392.

Melkote itself boasts of lush fields and agro units, and the incomes of its residents are rising. But it still doesn't have 24x7 access to basic healthcare. Its troubles are representative of one of India's biggest failures--that a country with an 8% growth in gross domestic product (GDP) still cannot provide the essential healthcare to its citizens.

Here is a bigger irony: Karnataka ranks number three among states that produce the most number of doctors every year in India. But Mandya's doctor-patient ratio of 1:20,000 is closer to that of backward states such as Chhattisgarh and Jharkhand. The World Health Organization (WHO) standard is 1:1,000.

An analysis by IndiaSpend revealed that, between 2007 and 2014, the southern states added more doctors to the national talent pool than other regions. Tamil Nadu added 23,754 doctors, Karnataka 25,432, Kerala 9,406 and Andhra Pradesh 15,233. This is a third of the total number of doctors added by all states across the country during the period. 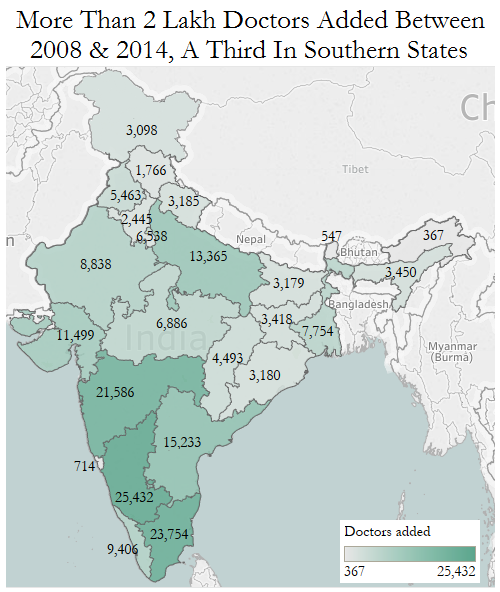 But none of these states have doctor-patient ratios that are anywhere close to the ideal. Karnataka, for instance, ranks number 10 among the worst performers on this parameter and Andhra Pradesh, number 5.

Shortage of doctors; disparity between states

Despite government investment, India could add only 2.07 lakh doctors between 2007 and 2015. The requirement is for another 3 lakh. IndiaSpend had earlier reported how India is faced with shortage of 5 lakh doctors.

Data analysis showed that it would take India another decade to come up to the WHO standard.

Of the 9.3 lakh doctors in the country, only 1.06 lakh work for the government. This means there is one government doctor for every 11,528 people, according to the National Health Profile 2015 report.

Even if we add private doctors to the tally, the doctor-patient ratio only moves up to 1: 1,319, still lower than the WHO limit, 75% lower than Argentina, and 70% lower than the US, according to data from World Bank.

There are states that fare worse than the average--in Bihar, Chhattisgarh and Maharashtra, one doctor serves more than 25,000 people. 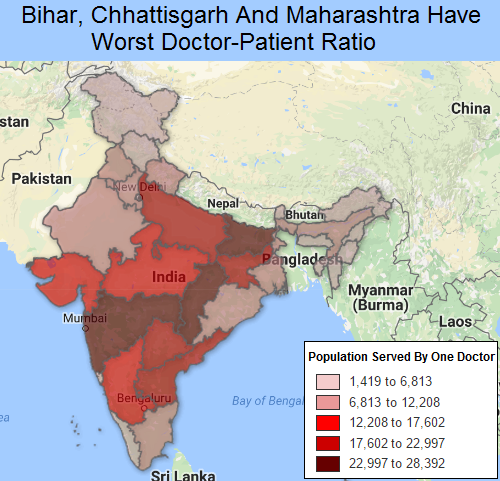 Bihar, which has the worst doctor-patient ratio, could add only 3,179 doctors in seven years. It would take it another 140 years to make it to the WHO standard.

Medical college seats double, but all concentrated in south, west

The number of doctors available can be directly linked to the number of its medical colleges in the country. Data collected over the past 10 years show an impressive growth in number of colleges and seats, with almost 18 more colleges added each year and the number of seats doubling.

As of October 2016, there were 422 medical colleges with 57,000 medical seats across the country. However, 60% of them are concentrated in six states and one union territory--Maharashtra, Karnataka, Andhra Pradesh, Tamil Nadu, Kerala, Gujarat and Pondicherry--covering 50% of the medical seats in India, according to ministry of health & family welfare data.

In contrast, in states such as Bihar, Uttar Pradesh and Assam where there is greater need for medical help, the number of colleges is less.

Most of the colleges added over the last decade, however, were private. Today, private colleges (224) outnumber government medical colleges (198).

But medical education entrepreneurs seem to be steering clear of the northeast--there are none in Assam, Manipur, Meghalaya, Tripura and Nagaland. Sikkim has one.

"Medical education is a thriving business. But private investment in medical education is concentrated in the southern states, and in Maharashtra. It's not lucrative in backward states," said Deoras Kiranshankar of the Indian Medical Association. "Second, private medical colleges are bringing in rich students who show little willingness to work in rural areas. Many of them go abroad."

The government needs to intervene, he said, opening more affordable medical institutions. Kiranshankar cited Chhattisgarh, with five government medical colleges and only one private college, as the ideal that other states needed to emulate.

India's poorer states have health indicators that are worse than those of many nations poorer than them. This is not surprising because health expenditure as a share of India's GDP has not improved in the last two decades--it was 1.1% of the GDP in 1995 and it only rose to 1.4% in 2014.

The Twelfth Five Year Plan and the draft health policy in 2015 have committed to an increase in public expenditure on health--to 2.5% of the GDP.

The result is that that 89.2% of the health expenditure in India is private (out-of-pocket), according to this 2014 World Bank report. It was 91.4% in 1995. Out-of-pocket expenditure is the share of expenses that patients pay to the healthcare provider, without a third party insurance or government-subsidised treatment.

In 2011-12, the share of out-of-pocket expenditure on health care as a proportion of total household monthly per capita expenditure was 6.9% in rural areas and 5.5% in urban areas, according to the National Health Policy-2015 report of the ministry of health and family welfare.

The Indian healthcare industry, which remained strong even during the recession of 2008--when it was valued at Rs 3 lakh crore--is projected to grow to Rs 18 lakh crore by 2020, according to industry body India Brand Equity Foundation.

Why rural India still travels to town for medical help

Melkote's inadequate medical infrastructure is visible across Indian villages. Two-thirds of the country lives in villages, but most doctors are concentrated in urban areas which already have good medical infrastructure. In PHCs across India, only 27,355 allopathic doctors were posted in rural areas; 79,060 were working in towns and cities, data from two years ago show.

Union health minister J P Nadda has acknowledged this divide. Answering a question in the Rajya Sabha on doctors' reluctance to serve in rural areas, he said that the feeling of professional isolation and a disparity in the living conditions between towns and villages were the primary reasons.

PHCs in rural areas are short of more than 3,000 doctors, the scarcity rising 200% (or tripling) over 10 years, IndiaSpend reported in February 2016.

But, government efforts lack in scale, resources, training and financial outlay: Around 25% of the sanctioned posts for doctors in PHCs and 66% of specialist posts in Community Health Centres are lying vacant, according to a rural health statistics report. 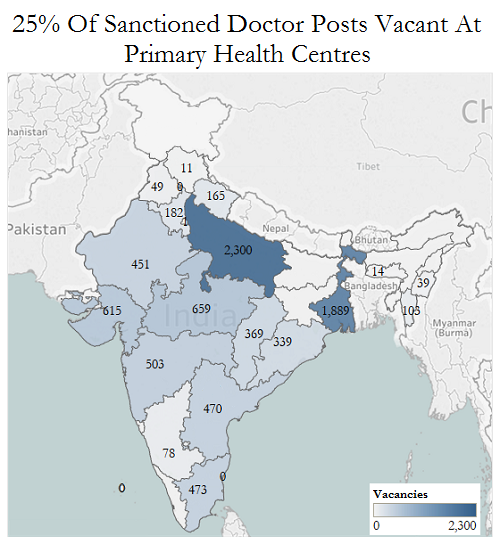 "The government is to blame. Without creating necessary infrastructure, without medicines, without medical equipment and lab facilities, how can a doctor function if posted in a distant village? Housing and schools for doctors' families should be there," said Kiranshankar.