New Delhi: Nine of India’s 21 large states saw a decline in their health sector performance, and five of these are also among India’s poorest, according to a new report. Bihar saw the largest decline while Haryana saw the highest improvement.

These findings were part of the second edition of Healthy States Progressive India Report released on June 25, 2019 by government think tank NITI Aayog, which tracked and compared states’ performance in the health sector between 2015-16 and 2017-18. The report is “an annual systematic tool to propel states towards undertaking multi-pronged interventions that will bring better health outcomes”, the NITI Aayog wrote.

The report derived a health index for each state based on 23 health indicators falling under three categories: health outcomes, governance and information, and key inputs and processes. ‘Health outcomes’ included indicators such as neonatal and under-five mortality rate, institutional deliveries, sex ratio at birth among others; ‘governance and information’ included data integrity measure i.e. percentage deviation of reported data with survey data, occupancy of officers at key positions at state and district level, while ‘key inputs and processes’ looked at proportion of vacant healthcare provider positions and proportion of IT-enabled human resource management systems in place.

Seven states saw an improvement in scores while nine states saw a decline. Five of these--Bihar, Uttar Pradesh, Uttarakhand, Odisha and Madhya Pradesh--as we said, are also among India’s poorest. Together with Rajasthan, Jharkhand and Chhattisgarh, which improved their health index scores, these states form the Empowered Action Group (EAG).

Haryana saw the most improvement in its index score in 2017-18, while Bihar saw the largest decline.

Andhra Pradesh and Maharashtra saw the most improvement in rankings--by six and four positions, respectively--while Tamil Nadu saw the highest decline, falling from third to ninth position in 2017-18. 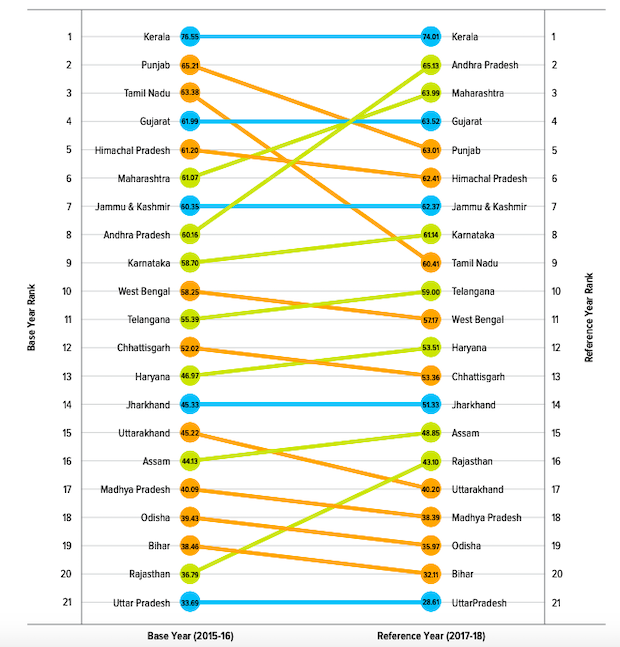 Among eight smaller states, Mizoram ranked first (73.70) while Nagaland ranked last (37.38). Tripura and Manipur showed the most improvement in health score. Four out of eight smaller states showed a decline in the overall health sector performance.

Among union territories, Chandigarh ranked first in overall performance (63.62) while Daman and Diu performed the worst (41.66). Dadra and Nagar Haveli saw the most improvement.

Why EAG states continue to flounder

Bihar also took the 191 days in 2017-18 to transfer National Health Mission (NHM) funds from state treasuries to departments or societies from 40 in 2015-16.

In Bihar, there is not a single district or sub district hospital with a quality accreditation certificate in 2017-18, a decline of 27.16 percentage points since 2015-16.

In Uttar Pradesh, the decline was due to high prevalence of low birth weight, low TB treatment success rate, poor average tenure of key positions at state and district level (18.98 months), and low birth registration (60.7%). The TB treatment success rate fell from 87.5% to 64%, while the percentage of low birth weight babies increased from 9.6% to 11.8%. The birth registration fell from 68.3% to 60.7%. 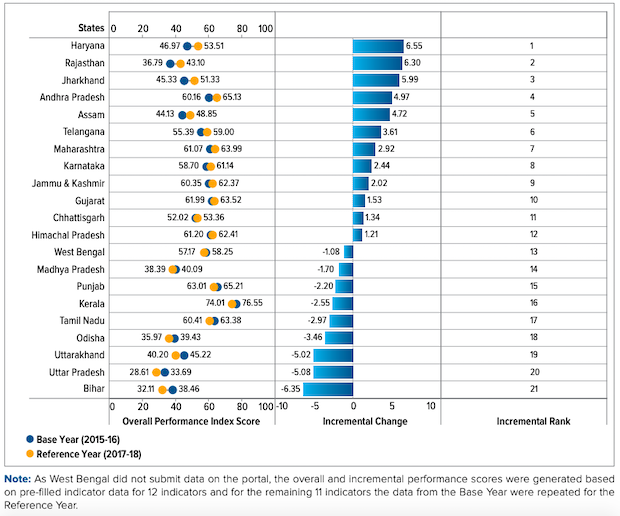 In Uttarakhand, the decline was due to high rates of neonatal and under-five mortality, low stability of key administrative positions at district levels, a 30-percentage-point reduction in functionality of primary health centres performing specified number of C-sections per year, and NHM fund transfer delays. The state’s neonatal mortality rate increased from 28 deaths per 1,000 live births to 30, and its under-five mortality rate increased from 38 to 41.

While the “immediate outcomes” of under-five mortality and neonatal mortality rates have improved in most EAG states (except Uttarakhand), most “intermediate outcomes” such as full immunisation coverage, institutional delivery and TB treatment success rate have not and need “significant improvement”, the report said.

What worked for Rajasthan, Jharkhand and Chhattisgarh?

Chhattisgarh’s improvement was due to better performance on “key processes”: it improved 24-hour functional primary health centres from 40.3% to 111.3% (that is, more than the targeted number), first trimester antenatal registration from 74.6% to 89.4% and community health centre grading from 47.7% to 67%.

High ranking states, called “front-runners”--scoring in the top one-third--also showed a decline in their performance. Of these, Tamil Nadu (-2.99) saw the largest decline, followed by Kerala (-2.55) and Punjab (-2.20).

“The states which were already performing well do not show as much incremental change as states that were poor performers before and have more scope to improve,” said V K Paul, member, NITI Aayog, during the press conference to launch the report in New Delhi.

Andhra Pradesh and Maharashtra were the only two states that were among the top one-third states on both overall performance as well as improvement in performance. Andhra Pradesh had the highest proportion of indicators (63%) among the larger states which fall in the category of “most improved” or “improved”.

“Despite relatively good performance, however, even the front-runners could further benefit from improvements in certain indicators as the highest observed Index score of 74.01 is well below 100,” the report said.

The report also found that there was a general positive correlation between the health index scores and the economic development levels of states and union territories as measured by per capita net state domestic product.

However, the report found, a few states--such as Jammu and Kashmir, Manipur, Mizoram, Andhra Pradesh and Punjab--with relatively low level of economic development performed well in the health index.

“The lessons from these states may provide some insights on how to improve health index scores in states with similarly low level of economic development,” said the report. “On the other hand, some states and union territories with relative high level of economic development did not perform as well in health index score, such as Goa, Delhi and Sikkim.”

This story was first published here on HealthCheck.