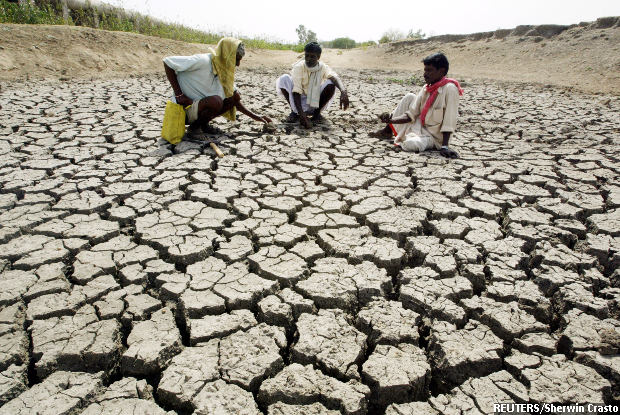 People living in underdeveloped parts of central India are most vulnerable to the health impacts of heat waves, a Heat Vulnerability Index (HVI) for India has found.

The index considered various factors including a person’s age, caste, income and health, as well as the green cover in an area, as having a bearing on people’s heat vulnerability, and its analysis of 640 (of the 707) districts in the country finds ten districts to be “very high risk.” Six of these are in relatively underdeveloped areas in Madhya Pradesh and Chhattisgarh. In contrast, the 20 districts in the “very low risk” category are mostly in the relatively developed states of Kerala and Goa and the union territory of Lakshadweep.

The Index was published in The International Journal of Environmental Research and Public Health, a peer-reviewed scientific journal, in March 2017. Researchers used data from the 2011 Census of India, the District Level Household Survey-3 and the Indian Space Research Organisation, combining it statistically to create the index, according to this Rand Corporation blog post by two of the authors, Gulrez Shah Azhar and Jaime Madrigo. 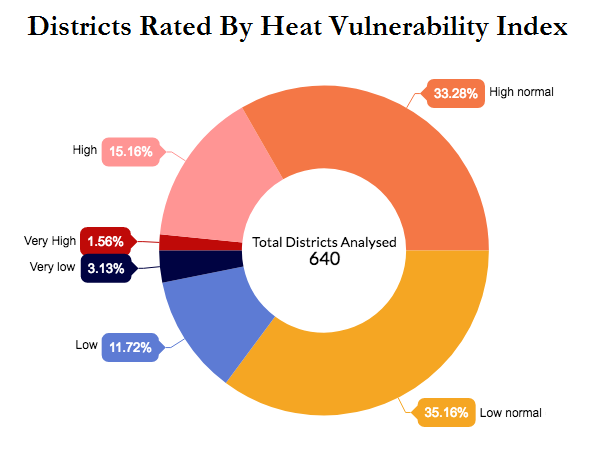 The very high-risk areas, concentrated in Madhya Pradesh and Chhattisgarh, are less urbanised and people there have fewer household amenities as well as lower rates of literacy and access to water and sanitation.

These high-risk areas are not the same as areas with high or rising temperatures -- the correlation between the HVI and average land surface temperatures is moderate. “When we think of temperature, there are several issues to consider--in addition to temperature there is effect of humidity and radiant heat on mortality. At the same time, local populations are adapted to (used to) the prevailing temperatures. Deaths happen when heat exceeds these adaptation thresholds,” Gulrez Shah Azhar, one of the authors, told IndiaSpend.

The number of deaths due to heat waves recorded in 2015--more than 2,400--was higher than the number of deaths caused by any other natural disaster, according to the ministry of home affairs. In 1998 the death toll was 3,000 and in 2002, over 2,000, according to data from the National Disaster Management Authority (NDMA) 2016 action plan for the prevention and management of heat waves. The NDMA is an agency under the ministry of home affairs.

A heat wave is a period of abnormally high temperatures (more than the normal maximum temperature) that occurs during the summer season, with the resultant atmospheric conditions causing physiological stress, and sometimes death, among affected populations, according to the NDMA.

a. Hot weather conditions are not considered a heat wave unless the maximum temperature reaches 40°C in plain areas and 30°C in the hills.

Despite casualties, and the fact that heat wave deaths occur due to atmospheric conditions, heat waves are not included in the notified list of natural disasters, according to this response by the ministry of home affairs to a question asked in the Rajya Sabha, the upper house of parliament. 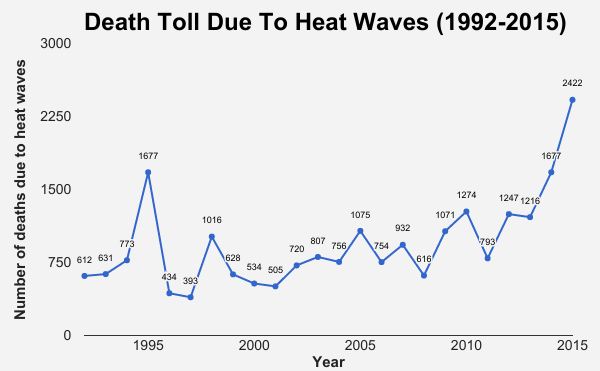 In 2016, the NDMA prepared guidelines for state governments to formulate action plans for the prevention and management of heat waves, outlining four key strategies: forecasting heat waves and enabling an early warning system; building capacity of healthcare professionals to deal with heat wave-related emergencies; community outreach through various media; and inter-agency cooperation as well as engagement with other civil society organizations in the region.

The NDMA says adopting these measures has brought heat wave-related mortality down in many places such as Ahmedabad. The city experienced a major heat wave in 2010, and registered over a 1,000 additional deaths in May that year that could be attributed to heat wave conditions. In 2013, the city adopted a ‘Heat Action Plan’ (HAP) that has reduced mortality in succeeding years. The primary objective of the HAP is to alert populations most at risk of heat-related illness to existing or impending extreme heat conditions, and to take precautions.

At the same time, the India Meteorological Department publishes daily bulletins containing information about the prevailing temperature and a warning for coming days. For example, on May 17, severe heat wave conditions were observed at isolated places over coastal Andhra Pradesh, and heat wave conditions at isolated places over Odisha, Vidarbha and Tamil Nadu, according to this IMD bulletin. 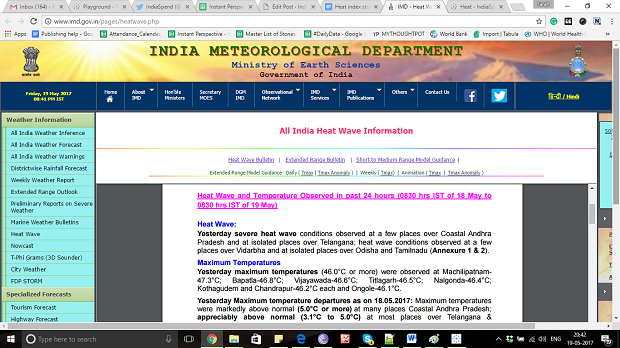 “The combination of exceptional heat stress and a predominantly rural population makes India vulnerable to heat waves. Vegetable vendors, auto repair mechanics, cab drivers, construction workers, police personnel, road side kiosk operators and mostly weaker sections of the society have to work in the extreme heat to make their ends meet and are extremely vulnerable to the adverse impacts of heat waves such as dehydration, heat and sun strokes,” the NDMA guidelines say, “Therefore, it is not surprising that these workers, homeless people and the elderly constitute the majority of heat wave casualties in India.”

The HVI confirmed as much. Pointing out that the high and very high HVI districts are in the central part of the country,the paper said that with a higher tribal population, these states have been at the lower end of various health, education, economic and population growth indicators.

f.Provision of drinking water within housing premises and indoor toilets.