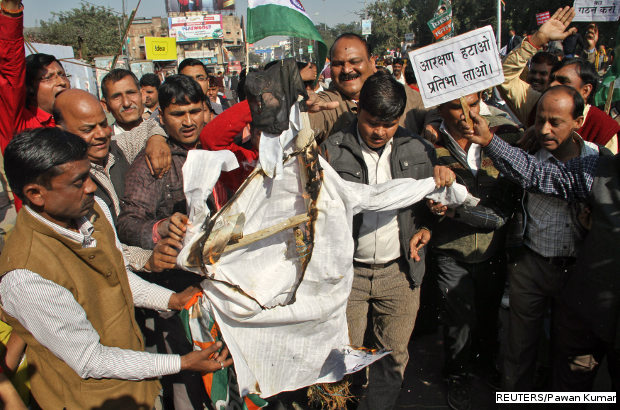 As the Supreme Court of India struck down on March 17 the central government’s decision to include Jats in a central list of Other Backward Classes (OBCs) from nine states, an IndiaSpend analysis reveals that these castes have disproportionately cornered affirmative-action quotas.

OBCs, a catch-all term used by the central government for a vast variety of castes that are considered socially and economically disadvantaged, are politically, educationally and economically better off than scheduled castes (SCs) and scheduled tribes (STs), which occupy the lowest rung of India's developmental ladder.

OBCs comprised 52% of the country’s population, according to the Mandal Commission Report of 1980. This was reduced to 41%, according to a subsequent National Sample Survey Organisation report, but they are politically powerful, as the demand to have Jats --a north Indian martial and farming community not traditionally considered backward--indicates.

In three of six large Indian states, OBCs have more government jobs reserved than SCs or STs, as this table indicates. The data also reveal the high combined percentage of such reservations, with 69% of all government jobs in Tamil Nadu set aside for a variety of disadvantaged groups:

Let us take a look at the social, economic and educational status of SCs, OBCs and other castes across India:

Economically, OBCs appear to do better than SCs, which are below them on the ladder of disadvantage. Their consumption capacity is better than SCs, fewer live below the poverty line, and they are better educated, in rural and urban India.

Reservation has always been a politically sensitive issue in India, used often as a tool for what is called vote-bank politics, the process of deriving electoral advantage from quota-based affirmative action.

The Supreme Court's ruling prevented New Delhi from including Jats from nine states in the list of OBCs. The states are Bihar, Gujarat, Haryana, Himachal Pradesh, Madhya Pradesh, Delhi, Rajasthan (from two districts of Bharatpur and Dholpur), Uttar Pradesh and Uttarakhand.

The Supreme Court said that social backwardness is a key factor in determining backwardness and caste cannot be the sole reason to grant reservation, a factor the central government overlooked in using a decade-old finding that declared Jats as backward.

Last August, the National Democratic Alliance government supported the decision by its predecessor the United Progressive Alliance, that Jats should be included in the central OBC list.

Reservation for OBCs started in 1993, when the government of India reserved 27% of its civilian jobs for these castes. Another 15% are reserved for SCs and 7.5% for STs.

More castes are being considered for inclusion in the central list of OBCs, as the table below explains.

Name of the Caste

“Mutatis Mutandis” applicability of Central List of OBC for the State of undivided Andhra Pradesh to the newly created State of Telangana.

India's debate over reservations will continue.

Recently, there was controversy over Maratha and Muslim reservation in the state of Maharashtra. The Maharashtra State Legislature approved the Maratha Reservation Bill, which would provide 16% reservation to the Maratha community in education and government jobs. But it dropped a similar 5% reservation for Muslims. The matter is pending with the Bombay High Court. The state government will keep vacant 16% jobs as the Maratha quota.

Both reservations were channelled through an ordinance by the previous Congress-Nationalist Congress Party government in Maharashtra, now governed by a Bharatiya Janata Party government.

(Prachi Salve and Chaitanya Mallapur are analysts with IndiaSpend)