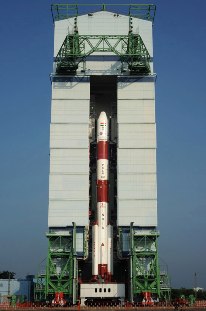 14.38, November 5, 2013 would go down in India’s history as a ‘red’ letter time and day when the Indian Space Research Organisation (ISRO) joined the league of countries and organisations that have successfully launched a mission to planet Mars.

The three international agencies that have been successful thus far are National Aeronautics and Space Administration (NASA) of the USA, Roscosmos of Russia and the European Space Agency (ESA).

Mars Orbiter Mission Mangalyaan is designed to orbit Mars in an elliptical orbit of 372 km by 80,000 km. Reports suggest the mission will take nine months to reach Mars. The orbit around Mars would also take nine months.

The Polar Satellite Launching Vehicle (PSLV), which had its 25th successful launch today, will send the spacecraft into 250*23000 km orbit with an angle of 17.86 degree. Incidentally, the minimum energy transfer requirement from Earth to Mars occurs once in 26 months.

The satellite is carrying scientific equipment (15kg) for the desired objectives, which are listed below:

There are two broad objectives of the mission - technological and scientific. The technological objectives are to design a mission which will survive and complete 300 days operation; deep space communications and navigation and ability to handle contingency situations.

The scientific aims of the mission encompass exploration of Mars surface features, mineralogy and atmosphere by using indigenous equipment.

The budget for the mission over the last 2 years stands at Rs 292 crore. IndiaSpend earlier wrote that ISRO’s total budget from 2003-04 to 2012-13 was Rs 43,867 crore, which is an average of Rs 4,386 crore every year. It can be assumed safely that ISRO’s budget since its inception would only be twice or thrice as NASA’s yearly budget (around $17 billion). However, even with such low allocations, ISRO has successfully launched 100 missions till now.