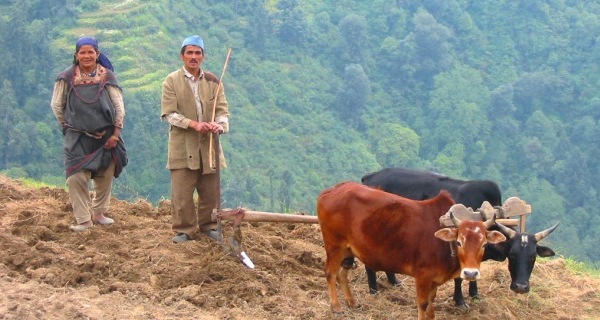 * Boosting agriculture crucial for economic growth of the state

* Per capita income has been rising steadily in Himachal Pradesh

India’s hill state of Himachal Pradesh went to the polls in the first week of November. IndiaSpend’s Dhritiman Gupta looks at the state’s balance sheet to see the factors that could determine the political course of the state’s future.

According to the 2011 Census, Himachal Pradesh is the only state in India with nearly 90% of the population living in rural areas. So, agriculture plays an important role in its economy.The Figure 1 below shows the All India and Himachal Pradesh growth rates from 2007-08 to 2011-12 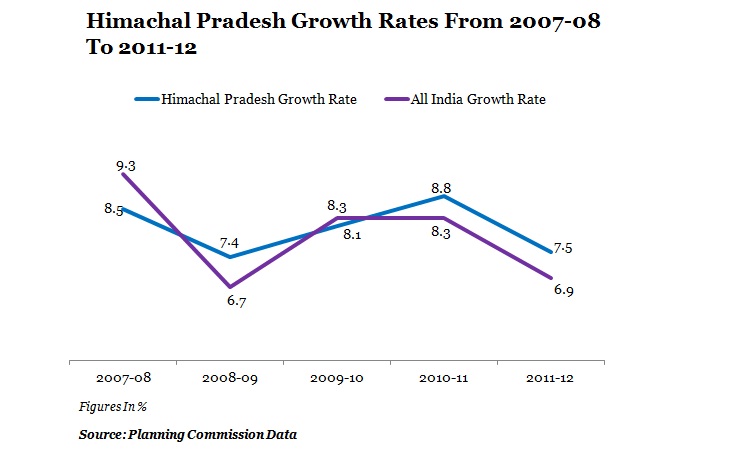 The table below gives a few more detailed numbers

Table 1: Growth Rate of GSDP and Per Capita Income 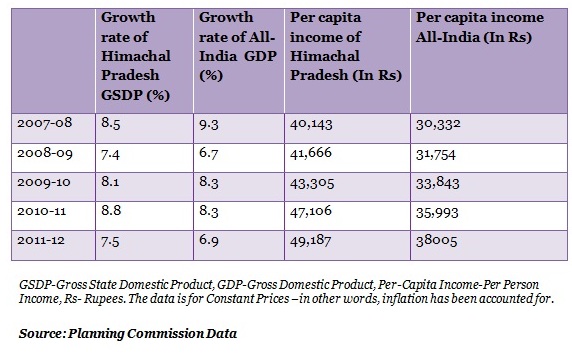 Over 2007-12, Himachal Pradesh has grown consistently at rates higher than 7% (Table 1). Growth slipped in 2008-09 and 2011-12 due to global worries but the hit for the Himachal economy was much lower than the whole of India.

Let us now look at the sectoral break-up of the Himachal economy. In 2010-11, the primary sector, which includes agriculture and animal husbandry, forestry and logging, fishing and mining and quarrying, contributed 21.7% to the GSDP of Himachal Pradesh.

Let’s take a closer look at the sectoral growth rates:

The secondary sector has recorded growth rates of above 8% over the whole period. The best growth rate, recorded in the year 2006-07, touched 13.6%.

The tertiary sector also recorded good growth rates. The sector recorded growth rates of above 10% in all the years except 2008-09 when growth slipped to 3.1% on account of the global recession.

Public administration, defence and services also recorded healthy growth rates in all years except 2007-08 when the growth rate was 3.1%. To sum up, all sectors, except primary, have been progressing well.

However, the primary sector, especially agriculture, plays a very important role in the economy of Himachal Pradesh given that it employs more than 70% of the working population of the state.

Curbing fluctuations in the sector is thus essential for the well-being of the majority people in the state.

Let’s now take a closer look at the growth rates in the agricultural sector: 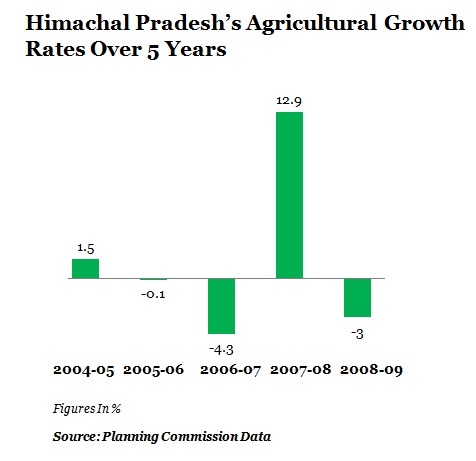 So, it is apparent from (Figure 2) that there are wide fluctuations in growth rates in the agricultural sector. Over the period 2004-09, agricultural sector recorded negative growth in 3 years. Another bad news is that average growth slowed down from 4.7% over 1996-04 to 1.3% over 2004-09.

According to Planning Commission data, about 81.5% of the cultivated area of Himachal Pradesh is rain-fed. So, fluctuations in monsoons cause serious problems in the state.

It’s clear that economic growth as demonstrated through data can lead to improvements in social conditions. The dependence on agriculture is however worrying and reflects a larger trend across several states in the country.