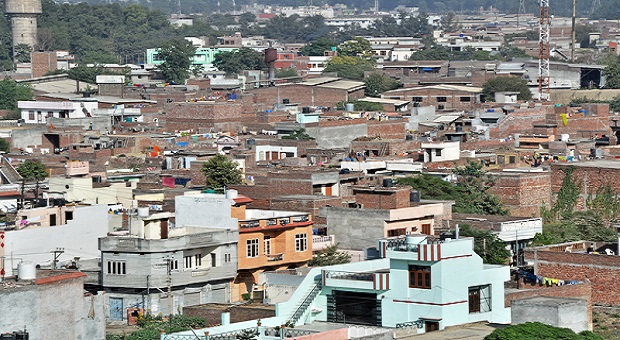 The Government of India has launched a host of schemes to make India slum-free, like the Basic Services to Urban Poor (BSUP) and Rajiv Awas Yojana(RAY).

It wants to do this by constructing affordable housing for the poor, as reported earlier by IndiaSpend.The larger problem, however, is financial exclusion of the poor by the financial system. Particularly since the poor, more often than not, have to lean on the unorganized sector for capital to build houses.

According to a survey by the Planning Commission, some 66% of households in India constructed their homes using their own resources, only 9% used institutional finance and the rest depended on non-institutional sources such as family, friends, money lenders etc.

The Government has tried to address the supply side impediment by increasing supply of housing for the economically weaker section (EWS) and low income group (LIG) categories through various schemes like BSUP under the Jawaharlal Nehru National Urban Renewal Mission (JNNURM), RAY and other state-level programmes.

And to improve access to finance, schemes like Interest Subsidy Scheme for Housing the Urban Poor (ISHUP) and Credit Risk Guarantee Trust Fund have also been in put place.

The ISHUP scheme was launched by the Ministry of Housing on December 26, 2008. An interest subsidy of 5% per annum for the whole duration of the loan (15-20 years) is provided for loans up to Rs1 lakh of EWS/LIG beneficiaries. The scheme is being implemented through banks and housing finance companies. ISHUP was re-launched as Rajiv Rinn Yojana (RRY) in September 2013 after a lukewarm response to ISHUP. Rajiv Awas Yojana has also been brought under RRY.

The following chart shows the allocation and utilisation by banks and housing finance companies of funds under ISHUP:

Housing for urban poor has failed to keep up with the rapid urbanization, which has led to low-income families living in cramped, sub-standard and often rented accommodation with limited access to civic amenities. As per a Planning Commission study for the Ministry of Housing and Urban Poverty Alleviation MHUPA, there is a shortage of more than 18 million homes in urban areas of which 95% are in the EWS and LIG segment, an income class with families earning up to Rs16,000 per month.

A National Housing Bank report says that one key reason why credit schemes have not worked well is the fundamental flaw in the assumption that the poor have access to land and needed only financial support to build their homes. The reality is that housing in urban areasis neither cheap and land is always in short supply. The report goes on to say that state-level housing boards must improve their capacity to fully utilise the available funds and deliver more houses.

An editorial comment by Hindu cited the example of the UK Government where the local authorities formed productive alliances with the construction industry and increased the production of homes four-fold. Specific annual benchmarks, such as a 10% reduction in cost and construction time, were set and procurement processes were streamlined. The financial gains from these improvements were then invested in the housing projects. The comment goes on to say that it is only by adopting such innovative practices and radically changing the approach to the provision of social housing can the vision of making cities slum-free be realised.