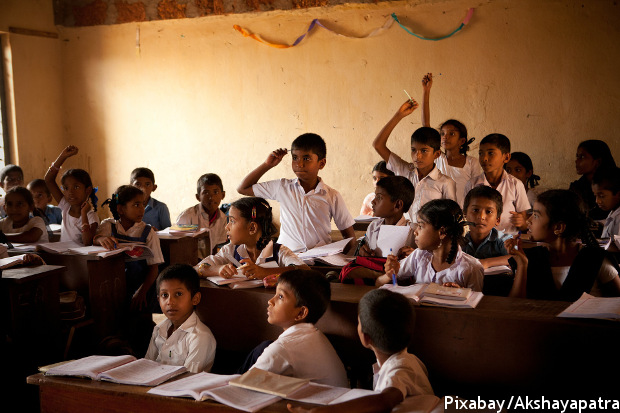 By 2030, India will have the world's largest working population--1033 million--but an IndiaSpend analysis of indicators on literacy, school enrolment, learning outcomes, and education spending across four states--with 43.6% of India's school-age population between the ages of five and 14--revealed that India is unprepared to educate and train its young population.

Overall, India's literacy rate has increased 8.66 percentage points to 74.04%, between 2001 and 2011, according to Census data, but wide variations exists across states.

The crisis in education is especially apparent in the four BIMARU states of Bihar, Madhya Pradesh (MP), Rajasthan and Uttar Pradesh (UP)--with 445.1 million of India's 1.2 billion population and some of the lowest literacy rates in the country, according to Census 2011. Bihar had a literacy rate of 61.8%, Rajasthan of 67.1%, UP of 67.7% and MP a rate of 70.6% in 2011, lower than the all India average of 74%. Kerala has a literacy rate of 94%, the highest in the country.

School outcomes are also lower in the four BIMARU states.

Currently, only 2.5% of school age children between the ages of five and 14 live in the four states--Kerala, Mizoram, Tripura and Goa--with the highest literacy in India, compared to 43.6% in the four BIMARU states, according to Census 2011. Any reform in education in the BIMARU states would have the greatest impact for India.

Over the next century, 60% of the population increase in India would come from the four states of MP, Bihar, UP and Rajasthan, while only 22% would come from the more developed states of Kerala, Tamil Nadu, Andhra Pradesh, Karnataka and Maharashtra, according to a 2003 study published by The Economic and Political Weekly.

UP and Bihar will have India's youngest populations over the next 10 years, as IndiaSpend reported in September 2016, together accounting for 31% of Indians between five and 14 years.

The productivity of India's young population would depend on how these states improve health, education and employment opportunities, according to this 2013 study published in Asia and Pacific Policy Studies.

Variations across states in India exist not only in literacy and enrolment, but also in factors that might impact future enrolment and learning.

For instance, life expectancy at birth, one of the factors found to affect literacy in India, according to this 2005 World Bank study, varies across states.

School enrolment is affected by a number of factors including parent's education, wealth of a household, midday meals, infrastructure and more.

Still, the BIMARU states spend less on education than their more literate counterparts. For instance, MP spends Rs 11,927 per student, while Tamil Nadu spends Rs 16,914 per student, the Economic and Political Weekly reported in September 2016. The per student spending, at Rs 5,298 , in Bihar is even lower.

Another important factor, parent's education, impacts school education, according to this 2001 paper published in the Review of Development Economics.

As many as 99.1% mothers in Kerala--the state with the highest literacy--received schooling, compared to 30.3% mothers in Rajasthan in 2014, according to the ASER - Trends Over Time report.

Further, factors such as wealth have a greater effect on enrolment in poorer states.

Overall, in India, children from rich families are more likely to be enrolled in school than children from poor families, but this gap is greater in UP and Bihar than it is in Kerala, according to a 2001 study by Deon Filmer and Lant Pritchett, published in the journal Demography.

This is the first of a five-part IndiaSpend series that looks at progress in education in the states of Bihar, Madhya Pradesh, Rajasthan, and Uttar Pradesh. You can read the second part here, the third part here, the fourth part here and the fifth part here.