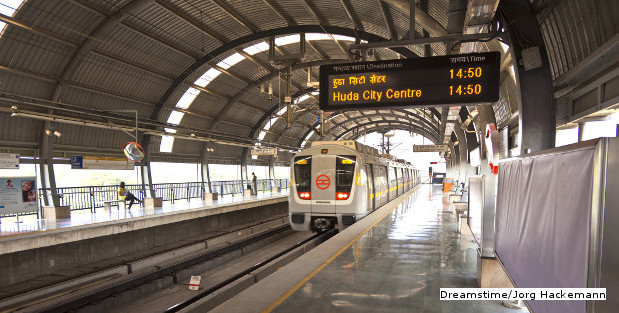 What does not come to mind is a bustling metropolis.

But if you believe the adage that "a penny saved is a penny earned", the Delhi Metro doubles up as an oil well, saving India Rs 1,200 crore every year, according to the Central Road Research Institute.

The Delhi Metro saves 2 million barrels every year by taking petrol and diesel vehicles off the roads. Given that the oil price averaged around $100 per barrel until a few months ago, this means an annual saving of $200 million or Rs 1,200 crore.

India imports more than 70% of its petroleum requirements and oil is the single biggest reason for India’s trade deficit.

Indiaspend has reported how public transport reduces congestion, saves time, cuts down on fuel consumption and pollution and saves lives.

For more than half a century, Mumbai was the only city with a functional--and hugely overloaded--mass transit system.

Now, it is the Delhi Metro that is India's urban-transport trendsetter, sparking modern metro rail construction in at least 10 other Indian cities.

In a recent response to parliament, these were listed as the metro's effects on Delhi:

The impact of the Delhi Metro has not been lost on policy makers and now metro-rail projects dot various cities. The first metro lines are already running in Mumbai and Bangalore. Here is a quick look at India's metro-rail projects: 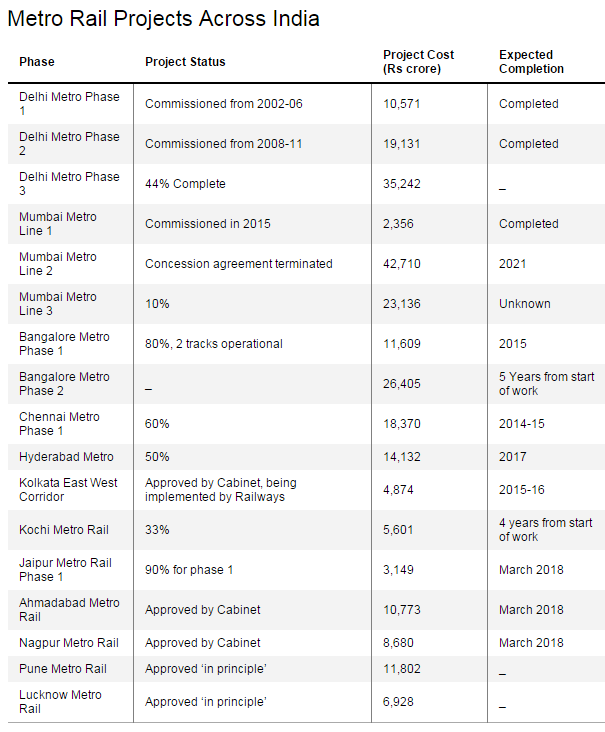 Once commissioned and operational, these projects will bring down traffic, accidental deaths and fuel consumption.

Of these, 17,000 deaths took place in 50 cities with a population of 1 million or more. Delhi leads the list with 1,820 deaths in 2013. If out-of-state suburbs (satellite towns in local parlance), such as Faridabad and Ghaziabad, are added, the numbers rise.

Chennai and Bangalore occupy the second and third spots.

While Mumbai’s population is almost the same as Delhi, fewer people die on its roads, because it has fewer vehicles than Delhi, courtesy the commuter rail system.

This correlation is also evident in other East Asian nations, such as Vietnam, Indonesia and Malaysia.

Investments in public transport, metro-rail and other solutions, can save money, cut pollution and substantially transform Indian cities, most of which are known for chaotic traffic and toxic air.

This public-transport investment can become a Make-in-India affair. Bharat Earth Movers Limited (BEML), a public-sector company, has become a major supplier of metro rail coaches, sending more than 700 to the metro projects in Delhi, Bangalore and Jaipur, with more on order. In the case of Chennai Metro, French company Alstom is the supplier – it will set up a plant in India to manufacture some of the coaches. Bombardier, a company from Canada which has supplied over 600 coaches to Delhi Metro so far, has also set up a manufacturing plant in Gujarat.

Not all projects have used the Indian option. Mumbai Metro uses Chinese-built coaches supplied, while the Hyderabad Metro's supplier is South Korea's Hyundai. In some cases, this may have happened because of sweet deals extended by foreign suppliers or banks in those countries.

These are large contracts. Delhi Metro had spent Rs 7,533 crore on rolling stock by the end of FY13. The initial orders of trains for Bangalore, Chennai and Hyderabad Metro projects are in the range of Rs 1,600-1,800 crore each. Given the large volume of business (refer the first table) expected in the future, it could be useful for the government to standardise coach/train designs and help develop economies of scale and cheaper urban-transport solutions.

Much of metro-rail costs result from civil construction, which could boost India’s infrastructure and construction companies, now struggling with a slowing economy. Construction is a major employer in India, so this investment will generate more jobs that offer training.

The Delhi Metro project has a great catalysing effect. The challenge is to ensure it is replicated quickly.