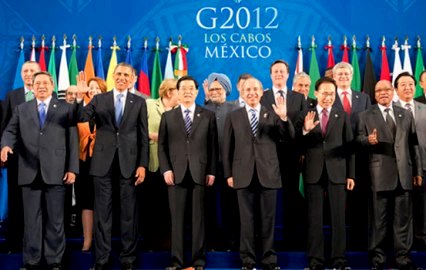 There was some consternation over India’s recent $10 billion pledge to the International Monetary Fund (IMF) reserve. This amount would contribute towards an additional $450 billion firewall to resolve the Euro zone crisis. The pledge was made in June 2012 at the G20 Summit in Los Cabos, Mexico.

IndiaSpend’s Sourjya Bhowmick takes a cue from the G20 Summit to see how India stands across both economic and social parameters against other member nations of the G20. The somewhat straight conclusion is; India scores well against G20 countries when it comes to economic growth, but fares badly on social development.

Incidentally, Russia, Indian, Brazil donated $10 billion each while China provided $43 billion. This $450 billion fund will be used to provide relief to the PIGS (Portugal, Ireland, Greece, and Spain) economies.

Before we go any further, here is the total list of all the member nations and some statistics;

*G20 members represent about 80% of the international global trade.

*Approximately 84% of all fossil fuel emissions are produced by G20 countries.

Let’s look at GDP, growth rate and Human Development ranks of these countries;

(All figures in trillion $)

(The table is organised based on higher to lower GDP, PPP)

The European Union (which is a part of the G20) has been left out of this table as they are a conglomerate of many nations. The table has been organised on the basis of a ranking of the countries with highest GDP as on 2011.

On the other hand, India and China, both with impressive GDPs and growth rates look weak when it comes to human development rankings.

India’s GDP growth rate currently stands at 5.3%, the lowest since 2003 when it dipped to 3.6% in January-March quarter of 2003. The ongoing Euro crisis has resulted in poor growth rates among the G20 nations.

While India seems to be better off when it comes to growth figures, the Human Development Ranking is the worst among the G20 countries. Here’s a look at the international HDI rankings.

Let’s take a look at a few social indicators and see how India does as compared to the other G 20 nations. First up, a few health indicators:

Health Expenditure as % of GDP

As you can see from the above table, India is one of the worst performers among the G20 countries in terms of health indicators. When it comes to life expectancy, India stands second last, with only South Africa doing worse than us.

India has the 3rd worst Maternal Mortality Ratio and the highest Infant Mortality Ratio. And India is also the worst when it comes to healthcare expenditure, spending only about 1.2% of the GDP on Healthcare.

Now let’s take a look at education across G20 nations.

Population with at least secondary education

Education expenditure as% of GDP

All this of course is not an answer to the question as to whether India should have contributed $10 billion to the IMF or not. It does give you a sense on the distance covered and the massive challenges ahead, particularly as you look beyond the numbers, at the people.