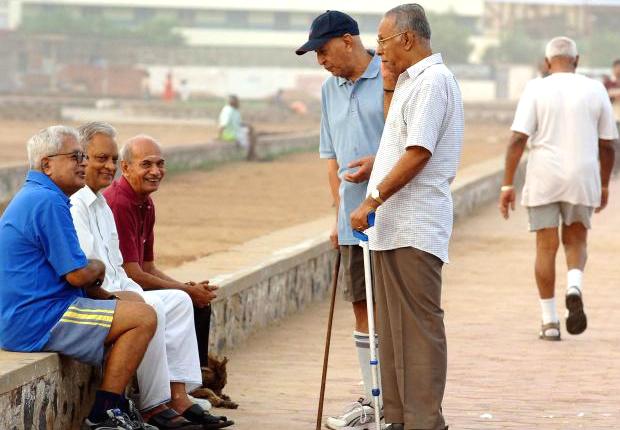 Is India a young country? The common response is the often quoted statistic; half the population is below the age of 25 years. But look closer and you find that the statistic can be misleading. Actually, it is frightening. Because some parts of young are, as is commonly believed, young, but there are other parts which are not.

As a matter of fact, in many states of India, the composition of ageing population is actually higher (or worse) than even Scandinavian and European countries like Sweden, Norway, Ireland and Netherlands – the oft-used examples to reflect slowing demographics.

A general background first. The 2011 Census in India recorded a decadal (or ten-year) growth rate of 17.64% in overall population, which was a 0.47% decline from the 2001 Census. This means the rate of increase of population of India is falling. Or, lesser number of people is being added.

So, after a spell of population explosion, India is now moving towards population stabilisation. This means that India will soon have more old people than young people. As per Census 2001, there were nearly 77 million elderly citizens in the country – senior citizens are above 60 years of age. The median age of the population of India is approximately 25 right now, and is expected to become 37 by 2050. Comparably, the median age of the world will be 36 in 2050.

But it gets tricky as you start looking at a state-wise picture. Right now, nine states in India have a Total Fertility Rate (TFR) below the replacement level. TFR equals the average number of children that would be born to each woman in a given population if she lived to the end her child-bearing age and had children. A TFR of 2.1 is considered to be the replacement level – a TFR above 2.1 means that the median age of the population will go down. If the TFR is below 2.1, then the median age of the population will increase. 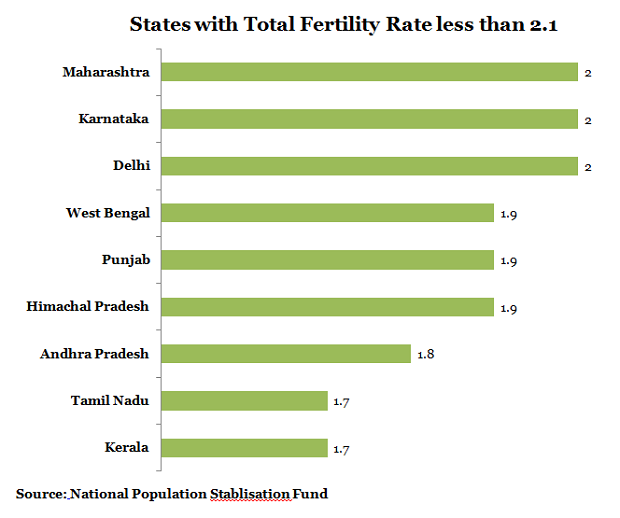 Surprisingly, all four southern states – Kerala, Tamil Nadu, Andhra Pradesh and Karnataka – have a TFR below the global average of 2.1!

In contrast, the following states in India have a TFR higher than the replacement level and thus improve the averages. 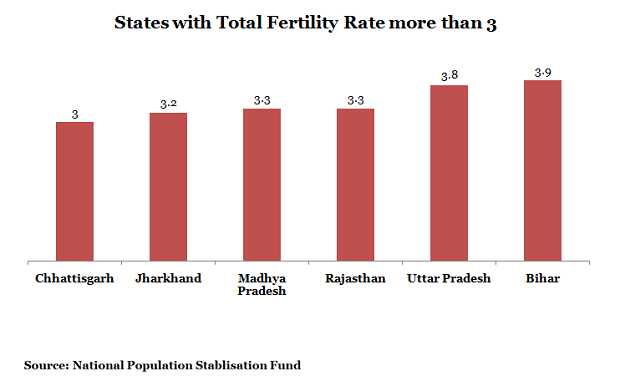 Poorer states like Bihar, Uttar Pradesh and Rajasthan have a TFR of above 3, which is also reflected in their young population.

In general, as is perhaps commonly known and studied, countries with high development usually have low fertility rates. If we compare the national figures with the top 10 countries on the Human Development Index 2011, only three countries have higher TFR than the replacement level. 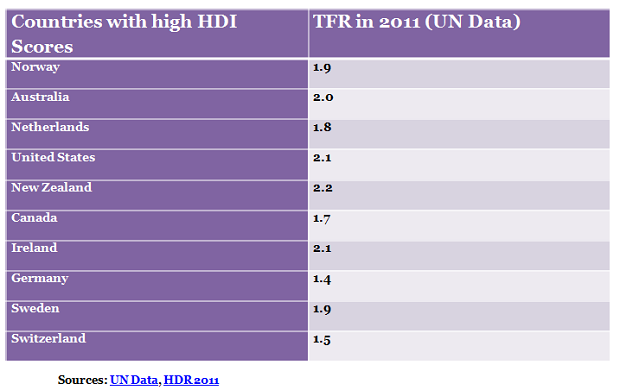 According to the Population Projection Report 2006, India’s TFR is expected to decline from 2.9 during 2001-2005 to 2.0 during 2021-25. So, India is likely to reach the replacement level by the decade of 2021, and a decline can be expected after that period. This implies that the Government must start planning for the ageing population of the county.

But this is at a national level. Fact is that this situation is already upon the nine states mentioned earlier. To that extent, these states would need special policy interventions for the ageing.

Let us now look at the Government’s current policy, The National Policy on Senior Citizens, which is focussed on three main welfare schemes.

* National Programme for the Healthcare for the Elderly

The total Budgetary Allocation for senior citizens in 2013-14 is limited to two schemes - Assistance to Voluntary Organisations for Old Age Homes etc and Construction of Old Age Homes for Indigent Senior Citizens with a total of Rs 40 crore.

The low allocation towards welfare schemes for the elderly is a cause of concern though state-wise data is not clear to IndiaSpend at this point. Anecdotally, many health experts worry about lack of care for elderly in states like Tamil Nadu. According to them, the policy framework is largely geared towards the young and newly born. As it should. But we should think about the old too.

Decadal Growth Rate - The percentage of total population growth in a particular decade.

Median age of population - The age of the population which divides a population into two numerically equal groups - half the people are younger than this age and half are older. It is a single index that summarizes the age distribution of a population.

Old Age Dependency Ratio - The number of persons of age 65 and over per 100 persons aged 15 to 64 years (for developing countries).

(Editor’s Note: Economist Ajit Ranade gets the credit for pointing the demographical insight on which this report is based.)