India’s Fight Against Anaemia Is Picking Up Pace, States Have To Do More

Faridabad, Haryana and New Delhi: It was past 2 p.m. Khusbu Chaudhari, 24, seven months pregnant, was lying on a bed in the general ward at the Ballabhgarh Government Hospital in Haryana’s Faridabad. A thin plastic bag with her medical file lay next to her.

Seven days before, when Chaudhari had first visited the hospital after moving here from her mother’s home in Mumbai, her haemoglobin was 8.2 gm/dL--much below the normal range (12-16 gm/dL) for women. This meant she had moderate anaemia--which, during pregnancy, can be very risky for her and her child.

A health assistant herself, Chaudhari did not want to take chances--she had an emergency caesarean section in 2017 when her first child was born.

Her doctor prescribed three doses of intravenous iron sucrose--a new strategy to treat iron-deficiency anaemia during pregnancy, under the Centre’s Anaemia Mukt Bharat initiative. The day we visited the hospital, Chaudhari was given her second dose at noon, and was under observation.

Like Chaudhari, more than half of all pregnant women (50.3%) in India were anaemic in 2015-16. Yet, only 30.3% of pregnant women took iron and folic acid tablets for more than 100 days of pregnancy, according to the National Family Health Survey, 2015-16 (NFHS-4). Hence, new strategies under the Anaemia Mukt Bharat initiatives are vital to maternal health--anaemia was the direct cause in 20% of maternal deaths and the associated cause in 50% of deaths in India, as IndiaSpend reported in October 2016.

India had programmes to fight anaemia since 1970, when the National Anaemia Prophylaxis Programme was launched--it focused on distributing iron and folic acid (IFA) tablets to pregnant women, and children under five. In 2013, the government launched the weekly IFA supplementation programme for adolescents.

However, as we said, only three in 10 pregnant Indian women took IFA tablets for more than 100 days of pregnancy and only a quarter of children under five took iron supplements, according to NFHS-4. Inadequate supply of IFA tablets and disparity in distribution were some of the reasons for poor uptake, studies (here and here) found.

Not just in pregnancy, anaemia is widespread in India: More than half of women in reproductive age are anaemic (53%) as are 22.7% of men and 58.4% of children under two.

Anaemia occurs when the concentration of haemoglobin--cells that transport oxygen--in blood decreases. With oxygen not reaching all organs and tissues of the body, the person feels tired, weak and is more prone to infections.

Nearly 50% of anaemia is due to iron deficiency, especially in women and children. Other causes include infections such as malaria and tuberculosis, haemoglobinopathies--blood disorders that affect red blood cells, such as thalassemia--and deficiencies of other nutrients such as B12, folate and vitamin A.

Anaemia affects the cognitive development, behaviour, and physical growth of infants, preschool and school-aged children. It weakens immunity in all age groups and impacts the ability for physical work in adolescents and adults.

Anaemia Mukt Bharat added emphasis to the failure of previous approaches, and addressed them by introducing critical monitoring to fill implementation gaps. Launched in March 2018 along with POSHAN Abhiyan, the National Nutrition Mission, Anaemia Mukt Bharat aims to reduce anaemia prevalence by three percentage points per year among children, adolescents and women of reproductive age (15-49 years) by 2022.

Is anaemia finally getting the attention it deserves?

“It is indeed,” said Purnima Menon, senior research fellow, International Food and Policy Research Institute (IFPRI). The lack of progress on tackling anaemia between 2006 and 2016 was a real wake-up call to the nutrition and health community, she said.

The strategy devised under Anaemia Mukt Bharat is called ‘6X6X6’--with a focus on six interventions, six groups of beneficiaries and six institutional mechanisms.

The most important of these is making available the IFA supplementation across the states, said Ajay Khera, deputy commissioner for child health and immunisation under the ministry of health and family welfare. While earlier programmes existed for 30 years, the reduction of anaemia has been just 1 percentage point per year, because the coverage of the supplements was about 20%, he said.

“This time around there is strong supply-chain mechanism to ensure that there is IFA tablet for each child, pregnant women and adolescent girl irrespective of the anaemia level,” Khera added. 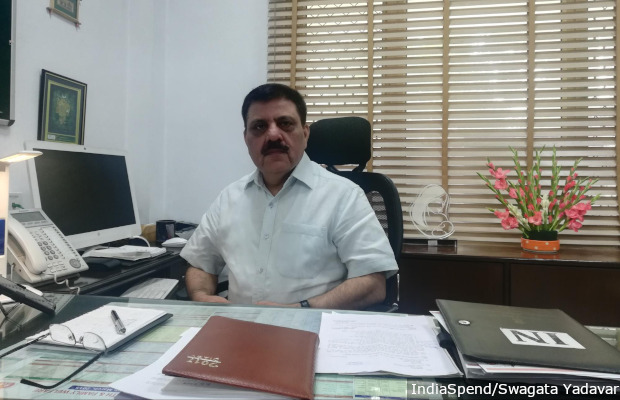 The most important of the interventions is providing iron and folic acid supplementation across states, says Ajay Khera, deputy commissioner for child health and immunisation at the ministry of health and family welfare.

“It’s not clear yet how well the work on non-nutrition causes (of anaemia) is moving,” Menon said. “And the data on the non-nutritional causes still needs to be released so that a geographically nuanced diagnosis can be done.” The Comprehensive National Nutrition Survey--started in 2016 to evaluate the nutritional status of children and adolescents--is ready, but not yet released.

There is also stronger monitoring with the Anaemia Mukt Bharat dashboard that displays statewise data on availability, and coverage of IFA across different groups. “Every quarter we are relaying the data back to the states so there is [a] continuous monitoring mechanism,” Khera said.

“While dashboards are good to visualise data, we don’t know enough about how the dashboards are being used, who is looking at them, and what kind of actions are being taken,” said Menon of IFPRI. The intended users of the dashboards often need support to walk through the data and understand what actions should be taken, IFPRI research shows.

The Test-Treat-Talk (T3) anaemia camp is a key strategy to generate demand and mobilise people. Held across the country since 2018, these camps use a digital hemoglobinometer to test for anaemia, give IFA tablets to treat, and counsel beneficiaries on lifestyle measures to increase iron levels in the body, and on foods rich in iron, protein and vitamin C.

In 2018, 900 camps were conducted nationwide which reached 100,000 people. In March 2019, 196,000 camps were held that reached 16.5 million people. In September 2019, during the nutrition month, T3 camps are expected to be held in government schools, colleges and institutions across India. 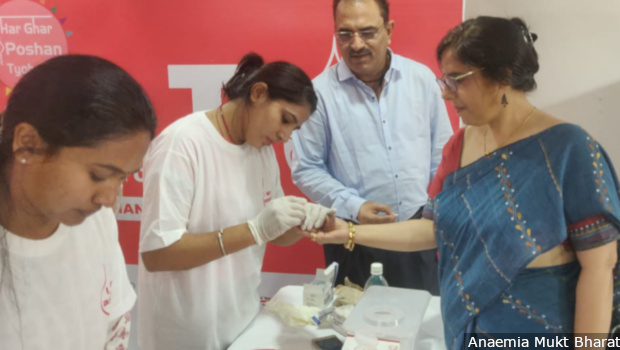 The Test-Treat-Talk (T3) anaemia camp is a key strategy to generate demand and mobilise people.

“Till now people didn’t know about anaemia or their own haemoglobin level,” said Khera. “This is a way for them to know their levels and also how to correct anaemia with supplements.”

The success of the camps has much to do with the adoption of the digital hemoglobinometer that allows instant haemoglobin testing. Conventionally, using laboratory facilities, it took up to three days for a patient to get their results--which led to poor testing and compliance, said Kapil Yadav, Associate Professor, Community Medicine at the All India Institute of Medical Sciences (AIIMS).

Progress has been slow in IFA coverage for children and adolescents: In 2018-19, only 9.4% of children below five received IFA supplementation, as did 17.9% children up to nine years and 27.4% adolescents.

Poor financial planning may have led to poor coverage, a UNICEF evaluation found. Most states did not plan for activities such as research, innovation, drug and warehouse logistics and human resources needed for the intensified initiative, the evaluation found.

States proposed only 36% of the required budget to achieve 100% coverage. While Rs 2,087 crore would have been required to reach all 407 million beneficiaries, only Rs 742 crore was proposed and Rs 574 crore was allocated.

Uttar Pradesh had a shortage of 87%--highest nationwide--followed by Gujarat (65%). While Jharkhand had no shortage, Maharashtra (19%) and Chhattisgarh (19%) had the lowest planning gap.

The researchers proposed that financing planning needs to be a part of Anaemia Mukt Bharat trainings and that states should plan for 100% coverage, and coverage based on their previous records.

Getting iron directly into the bloodstream

Administering iron intravenously to pregnant women with anaemia is a rapid way to meet the iron requirements essential for pregnancy and lactation. This is difficult to achieve in a short span by oral iron supplements.

At the Ballabhgarh hospital, every day, 50 pregnant or lactating women receive iron sucrose at the ward. Since 2014, the centre has administered more than 20,000 infusions, and provided evidence for the efficacy and safety of the intervention to fight anaemia in pregnant women.

The district hospital at Ballabhgarh is run under the Comprehensive Rural Health Services Project, a collaboration between AIIMS and the Haryana government. The Community Medicine department at AIIMS also houses the National Centre for Excellence and Advanced Research in Anaemia Control, which provides the technical inputs required for Anaemia Mukt Bharat. 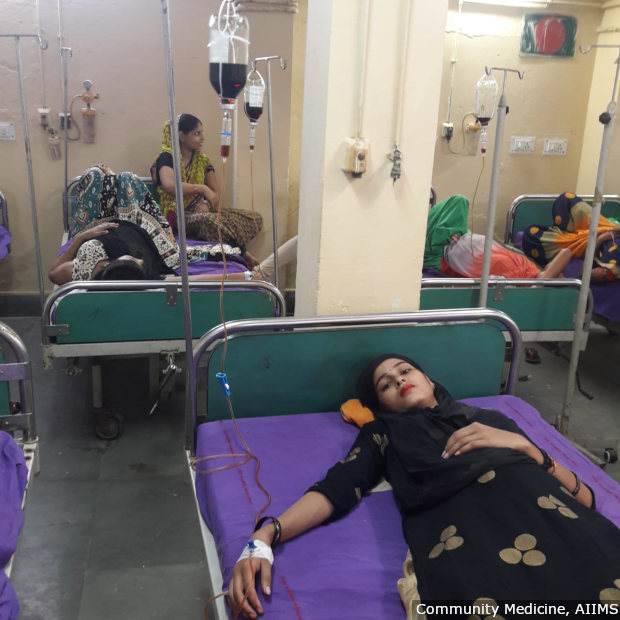 “Since we started administering iron sucrose to pregnant women with anaemia, almost all the women that come for delivery [in the centre] have normal levels of haemoglobin,” said Sunita Malik, 49, nurse-in-charge of the general ward at the hospital. “This means the women have lower risk of haemorrhage during delivery and less need for blood transfusion,” she added. Even lactating mothers are given iron sucrose if they are anaemic, as the baby will receive iron from the mother. 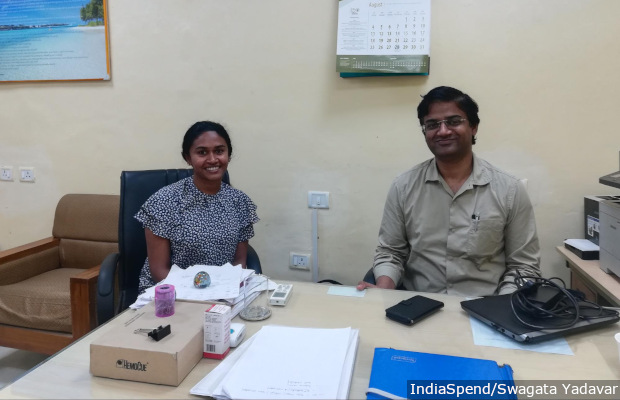 Earlier, only tertiary care centres with specialists were thought to be able to administer intravenous iron. “But our [AIIMS] research has shown iron sucrose is safe to be given in a primary healthcare setting where deliveries occur,” said Yadav, the AIIMS associate professor, adding that in the 12 primary health centres that AIIMS runs, 5,000 infusions of iron sucrose have been given.

“This is especially important given than pregnant women with severe anaemia would then require blood transfusion, which is difficult in a rural setting given paucity of blood banks,” Yadav added.

Back in the Ballabgarh Government Hospital, Chaudhari’s haemoglobin levels will be checked after she receives her third dose of iron sucrose at the end of the month. If she has adequate iron levels, she will need no further intervention. Chaudhari and her unborn child will have adequate iron levels to ward off anaemia for some time to come.

Reporting for this story has been supported by ROSHNI-Centre of Women Collectives Led Social Action.