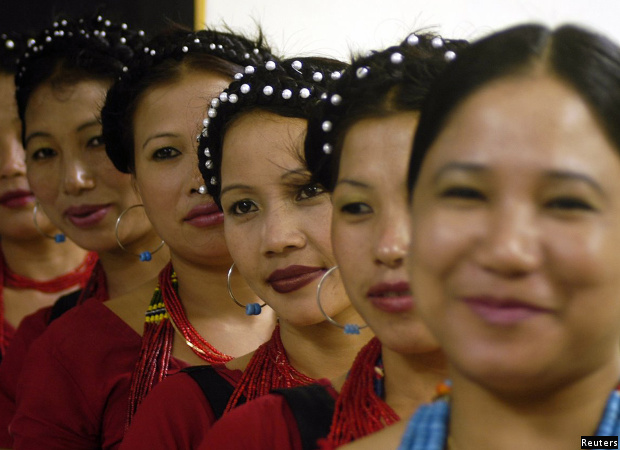 Dancers from the northeastern Indian state of Arunachal Pradesh wait to perform at a cultural show in Agartala, capital of India's northeastern state of Tripura.

* India's fastest-growing state is Meghalaya, with a growth rate of 9.7% in 2013-14, higher than the fastest-growing big state, Madhya Pradesh, at 9.5%. Arunachal Pradesh grew faster than Gujarat.

* Fewer people, 12.8 million, live below the poverty line in the entire northeast than in just one large state, Karnataka, which has 12.9 million poor people.

The eight north-eastern states--Arunachal Pradesh, Assam, Manipur, Meghalaya, Mizoram, Nagaland, Sikkim (added in 2002) and Tripura--are growing fast, educating their people at a rate much faster than the rest of India, reducing their dependence on agriculture, and generally prospering, IndiaSpend research has revealed, but the growth is not creating enough jobs and livelihood opportunities.

Other thing evident is that while northeast states are often clubbed together, we found, in many cases, wide differences; for example, Manipur’s high poverty rate and Sikkim’s prosperity. Some of the economic indices are India’s highest, and some are India’s lowest.

Today, in the first of a three-part series, we analyse the northeast's economic indicators, such as gross state domestic product (GSDP), unemployment, and population below the poverty line.

Meghalaya, Tripura and Arunachal Pradesh recorded the highest growth rates in GSDP in 2013-14.

Meghalaya’s growth in GSDP of 9.7% was equivalent to Bihar, which had a GSDP growth rate of 9.1%.

Arunachal Pradesh, with a growth rate in GSDP of 8.9% grew faster than Gujarat, which reported 8.7%.

The share of the industrial sector for all eight states has increased while the share of agriculture and allied activities has declined.

Unemployment in urban areas across all north-eastern states is higher than rural areas, and is in line with the national pattern.

“The growth in manufacturing has not been accompanied by a commensurate growth of employment opportunity for the local population," Sumarbin Umdor, professor of Economics at North-Eastern Hill University, wrote in The Shillong Times. "Given the lack of job creation in other formal sectors, most of the employment outside agriculture is therefore in the low productivity informal sector, particularly in informal construction, retail trade and transportation.”

Tripura recorded the highest unemployment rate in urban areas at 25.2% in 2011-12, India's highest jobless rate, followed by Nagaland with 23.8%, India's second-highest rate, and Manipur with 7.1%.

A caveat: Unemployment rates in rural India are always lower than urban, since they do not account for hidden or partial employment. In general, employment rates do not adequately reflect reality, but only offer an indication.

The northeast has widely varying rates of poverty, which largely reflect unrest and insurgency.

While 36.9% people live below the poverty line (the ability to spend Rs 1,170 per family per month in urban areas, Rs 1,118 in rural) in Manipur, where a cocktail of insurgent groups have crippled the economy, only 8.2% of the population is below the poverty line in Sikkim (Rs 1,226 in urban, Rs 930 in rural), where plentiful hydro power has raised incomes, as IndiaSpend has reported.

Meghalaya and Sikkim have seen some of the largest falls in poverty in India.

Although the number of people below the poverty line might be lower than the national average, the intensity of poverty in these states is much higher, according to the National Institute of Rural Development (NIRD).

Poverty in the northeast, like the rest of India, is a more rural phenomenon than urban: 11.6 million people of the 12.8 million living below the poverty line are in rural areas.

The two main reasons for poverty are under-developed agriculture and unskilled labour, according to NIRD.

To address the region's development challenges, including infrastructure, the Central government created the Ministry of Development of North Eastern Region in 2004, allocating Rs 2,362 crore to the ministry in 2015-16. The grants from the Centre and their share in Central taxes together form 79% of their total revenue, according to the Reserve Bank of India.

Some of the grants like the ones given out by the Ministry are influenced by politics as well. For example, from 2010-11 to 2012-13, Arunachal Pradesh received the highest grants with almost 19% of the total allocations. Later, when the government wanted to sign the Naga Peace accord of 2015, the allocation to Nagaland was increased (to 20%) and Arunachal Pradesh had come down.